Searching for Off-Piste from our base in Serre Che 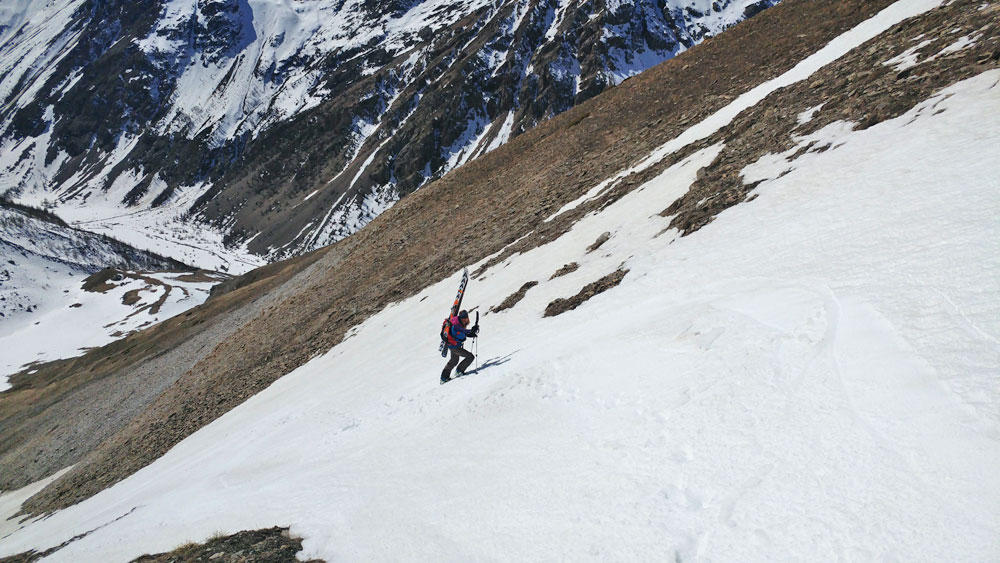 It really was a varied week of skiing just like the variable snow pack, from sublime powder in La Grave through to hard pack snow on the Granon / Gardiole

In the past 10 days we've been teased and tormented with the forecasts, in fact, we went to bed nigh on 10 days ago with it snowing heavily during the evening, but what we thought might happen did. The snow turned to rain in the early hours.

That did not stop many Serre Che locals for aiming for first lifts, however, God had other ideas, and hit the wind button and by 09:00 when the lifts were due to open only one chairlift did.

Ninety minutes later most of us had given up and returned home, as the promised powder was just too heavy to ski, welcome to Serrement (cement powder).

I still refused to give up and decided to skin up the closed pistes to the top of the Vallons lift just below the Cucumelle. I thought I was going to strike gold with the hectares of untracked, but again it was Serrement and almost impossible to ski. 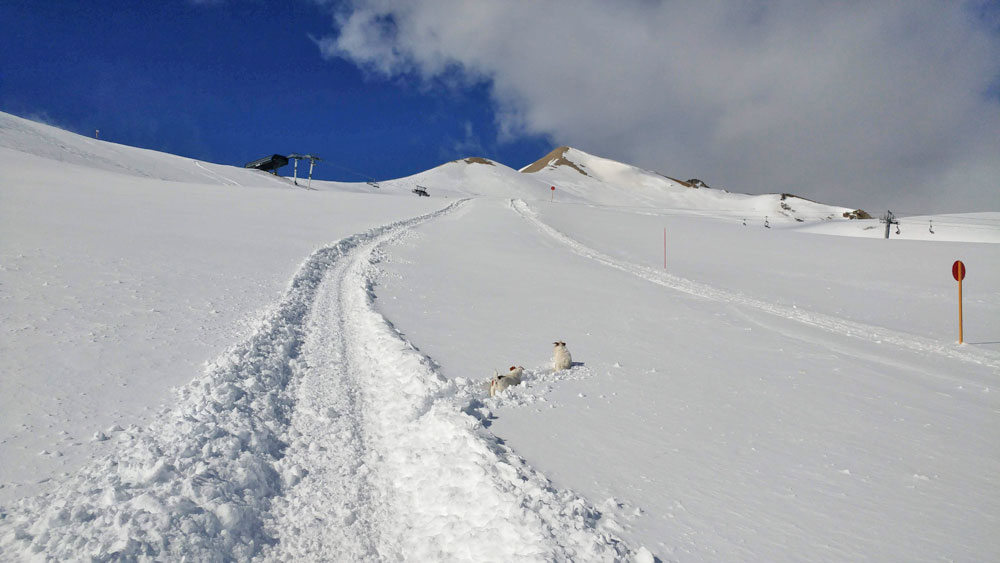 Saturday was the Grand Prix Serre Chevalier, and what a difference weather wise in 24 hours.

I said to myself if temperatures hit double figs my 11:00 it's out with the bike and shorts, and a slow ride up to the Lautaret due to the damn headwind. 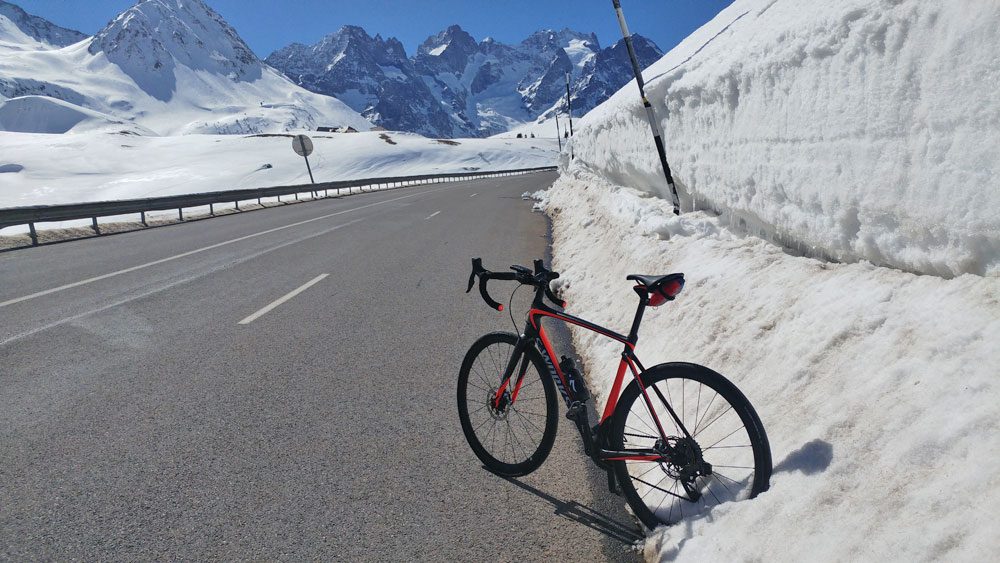 Next day I set out on my own and went to see what it was like off the Eychauda drag and one of our favourite slackcountry routes.

It was the first time that I had been up the Eychauda drag all season, and it was so depressing to see the ridge scoured of all snow, I have never seen it like that. However, I was hoping that all the windblown snow might be on the other side?

And yes it did look possible so I carefully chose my line as the steep slope is very susceptible to big slides and, once down, I looked back to see that there had indeed been two recent big slides. 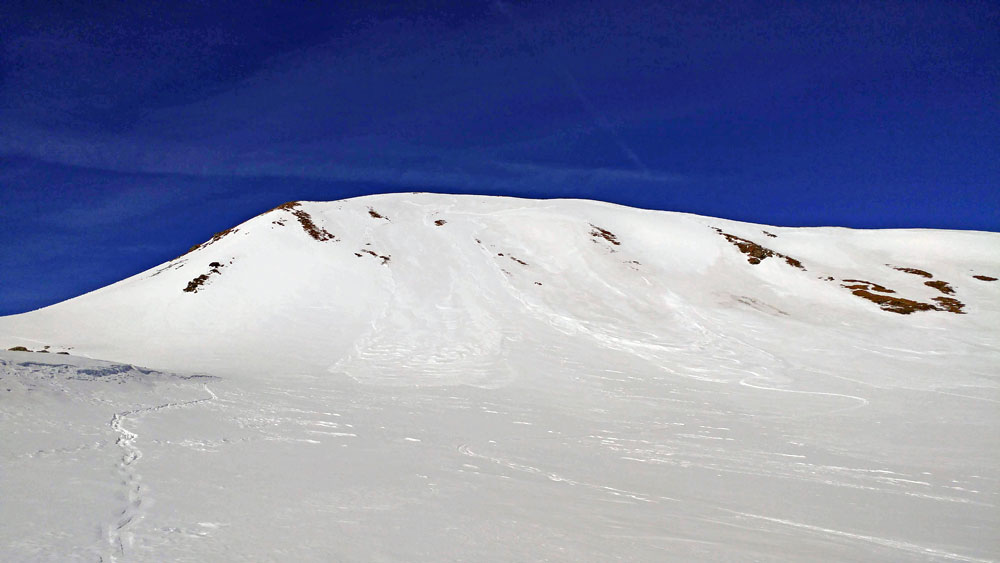 Skiing down towards the direction of Les Combes it was a case of trying to avoid the bare patches. Then it was on with the skins and climb up to the new Rocher Blanc chairlift, which was a first as we did not ski that route at all last year, in the end, I headed to Chalet Serre Blanc and estimate it must have been an additional 45 minutes over skiing up to the old Rocher Blanc chairlift.

Sunday evening WhatsApp texts were pinging back and forth with friends in La Grave. We had already bailed on a couple of planned days due to conditions, but we had the added incentive of having bought two day passes so there was no need to queue in line to buy them and Monday morning saw us about 10th in line for the lift.

Conditions were good, in fact, better than Serre Che where it was grey and windy, La Grave was bathed in sunshine and around 10cm of fresh snow.

After a few runs down to P2 and one to P1 we went back up and skinned over to the drag lift on the glacier which was scheduled to open at 11:30. 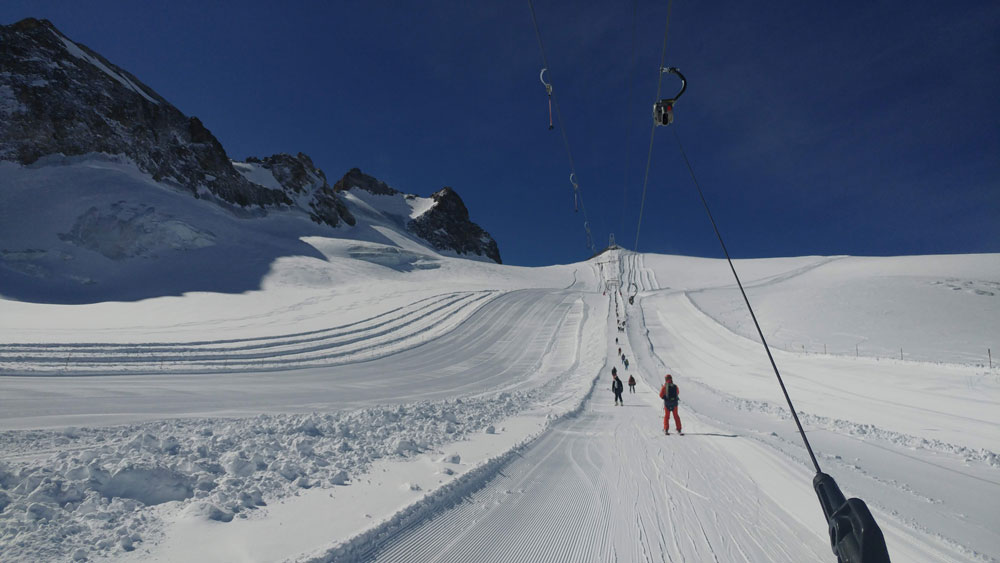 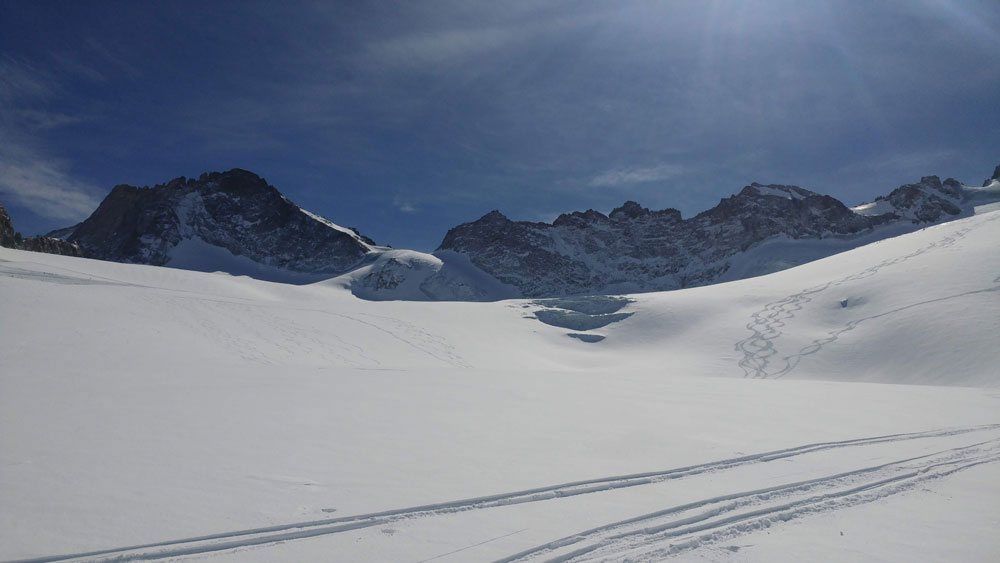 Have to say that my legs were tired by the end of the day, but that was becoming and will be a regular occurrence over the next days.

The following day more WhatsApp texts pinging away but this time around they were from the Serre Che Cafe Piste Skiers Association and we decided on a social piste ski but on arriving at the Bivouac there must have been around 20 Serre Che Geezonaires so we quickly said our social hellos and left as way too many people to ski with sensibly.

What we did do, however, was check out some of the other slackcountry options of Eychauda and Col de Mea, and then, in the afternoon, drove up the Col de Granon to see how far we could drive, which was around 1,980m.

And so the next day that was our objective, well, the Gardiole to be precise, along with the French army on manoeuvres, being dropped in by helicopter and then a series of army rat-tracks appearing and driving up the Granon road making a perfect piste. 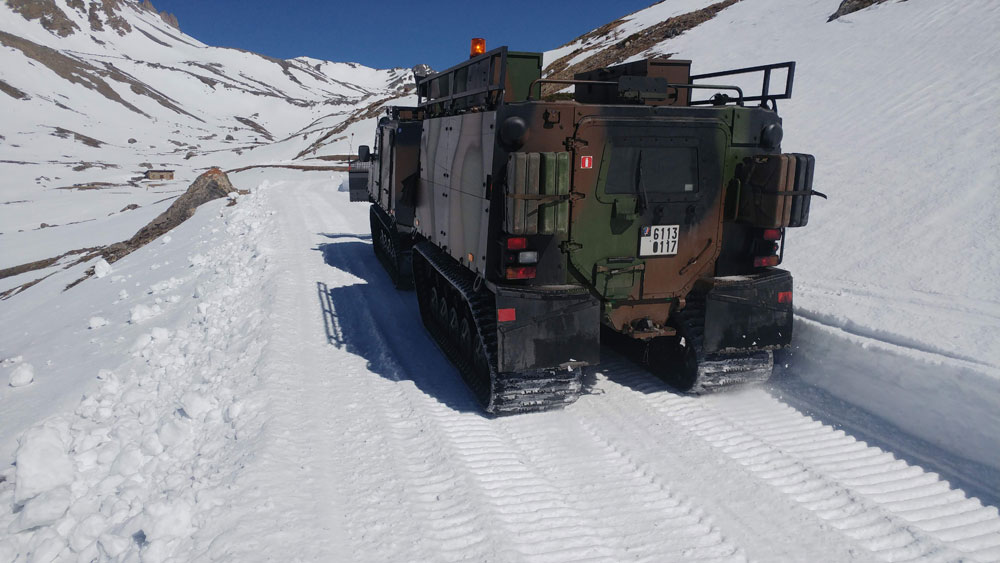 This season it seems that the wind has really trashed the snow, indeed the crystals are so compacted that there is no air flow and the snow is just too hard/cold to transform, especially on low angles, where it is a mixture of soft snow along with cust, real ACL-breaking snowpack if you're not careful.

For me, it was then a brief respite before I drove over to Chazelet and then a 90 minute skin to the new Refuge du Pic du Mas de la Grave for the night to meet up with a group of La Grave friends.

They had enjoyed excellent cold snow on the descent to the Refuge and we were hoping for more of the same the next day with options of two further climbs to ski spring snow back. However, overnight God turned the wind machine back on and was not to be. That said we did ski good windblown powder after a 700m climb back to Chazelet.

The Refuge is superb and well worth a visit.

The following day it was back out with the dogs, wife and friends and more of a social ski tour to La Crête de Dormillouse - Telly Tubby Land.

The issue with this area is the long 3.5km walk into the start of the climb. However, there is a cross country ski piste and as it was cold first thing so it was possible to skate ski with your alpine skis, but it is quite demanding. 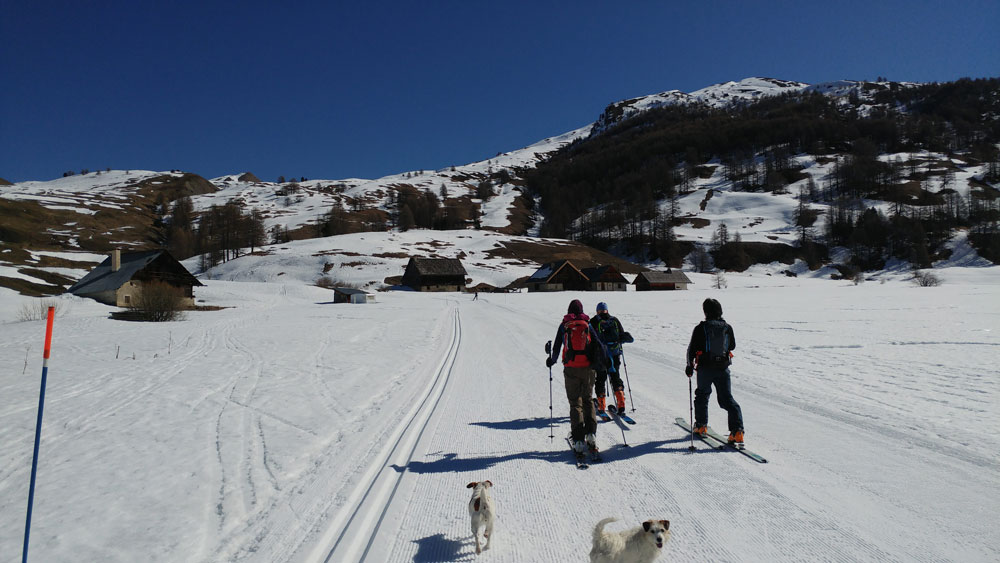 Again the snow was not transforming (west facing) and again we took our time. The top 400m was pretty dire but lower down the snow had softened up and was actually quite pleasant but you still had to be careful when the terrain flattened off not to catch a ski.

After the ski tour, I collected my new touring boots that I had bought as I had them blown out in a few places, so the next day what should have really been a rest day, we went for a mini slackcountry tour so I could see what the new boots were like.

As it happened we skied some very pleasant spring snow off the back of the Col de Mea, and luckily for my tired legs the snow ran out but not before we'd skied a steep pitch which saw us having to boot pack back up before we could skin the rest.

And finally, today, I write this, having at long last had a classic spring snow tour. In fact it was up there with the very best.

Together with some Norwegian friends staying in La Grave, we had a fabulous dinner at the La Table du Chazal, in Les Guibertes and then, this morning, opted for a tour up in the Galibier sector. It eemed like a good idea but the same idea was obviously had by many an Italian, and Grenobloise, Lyonnais groupes as well as many a local 05 number plate, so much so that all the key parking areas were nigh on full.

However, what you can usually bank on is that the vast percent will head up climbing the classic Pic Blanc du Galibier, and I must have counted arouond 40 or so making their way up.

I was still a tad worried as to how many might be heading our way up towards the Pic des Trois Evêchés along Le Vallon de Roche Noire, but felt reasonably confident that, again, they would all be heading for the classic Pic des Trois Evêchés, and sure enough there must have been 20 or so dotted along the route as we carefully turned sharp right after quite a challenging uphill gulley.

It was now obvious that, finally, without a chill breeze the snow was transforming nicely, and we arrived on the ridge just below 3,000m having climbed just under a 1,000m (another easy day). 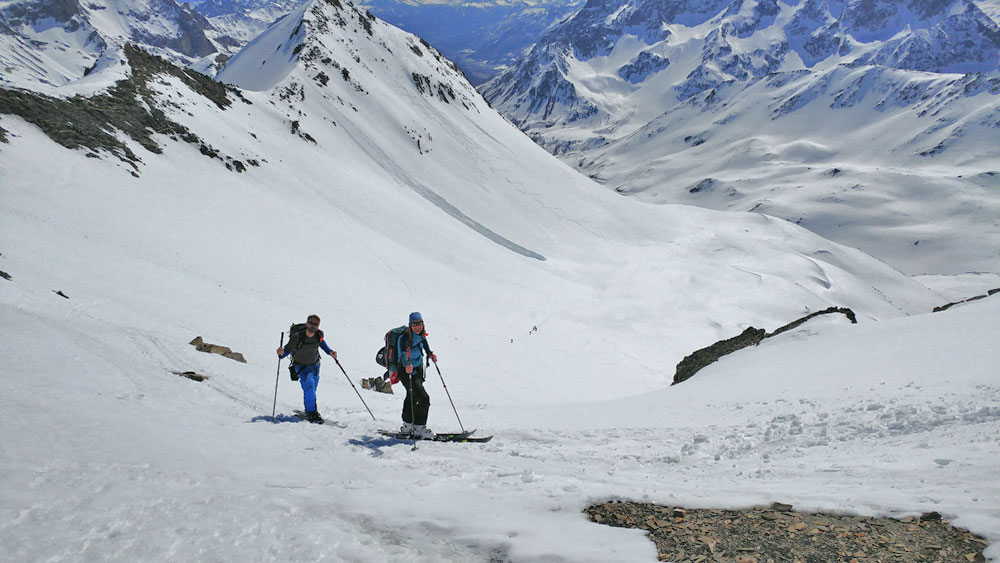 The views from the ridge are fantastic with Mont Blanc and Mont Viso clearly visible along with La Meije.

As we were transitioning there was another group making their way up to where we were, and as we were just about ready to decsend I recognied the guy in front as my good friend, La Grave Guide, Per As. 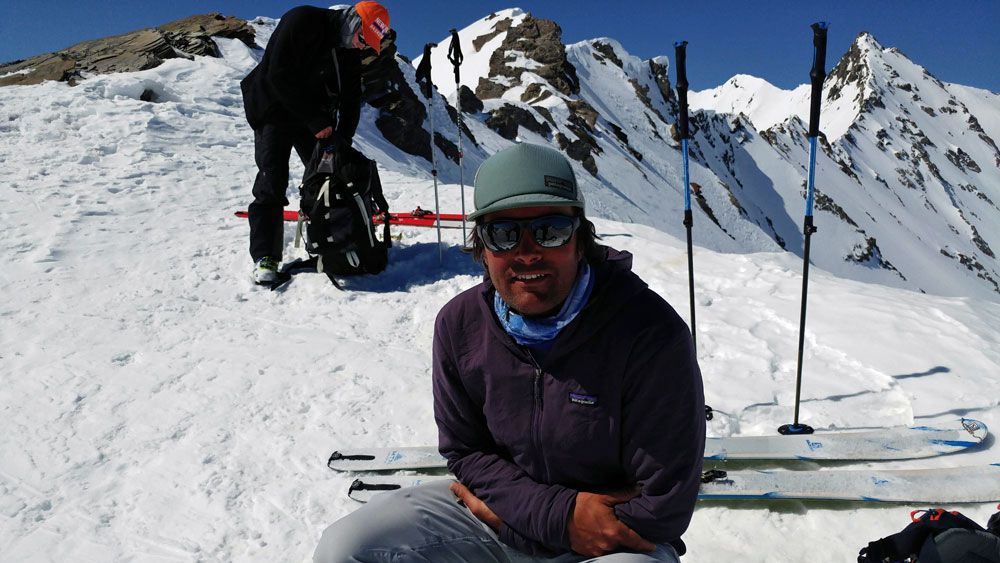 As I suspected he was going off the ridge to ski the powder before another climb back over the Col de la Charrat and then ski down to the Refuge du Goléon.

However, after quite a fustrating 10  or so days, I have to say it was one of the best ski tours of the season, finally with some classic spring snow. 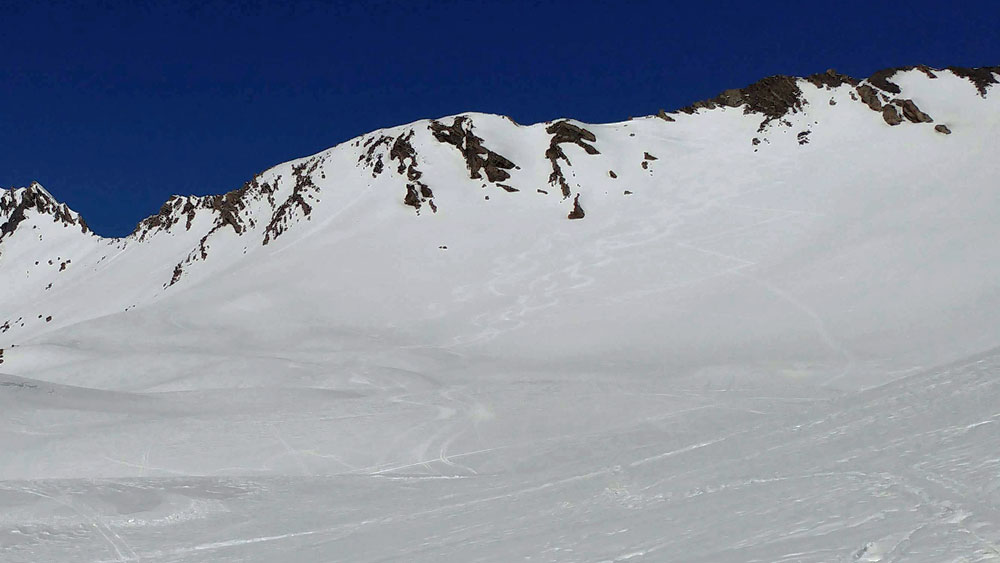