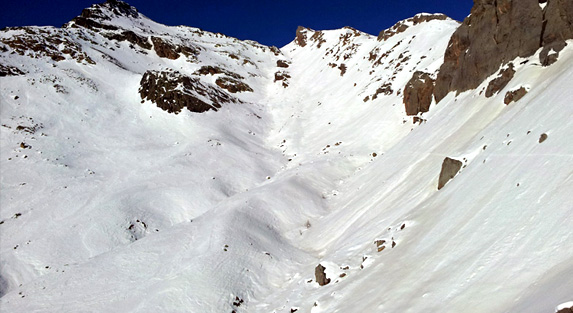 Using lifts to go off the back is a great way to do slackcountry. Using lifts AND a van can make it even better with a long run from the top over to another valley!

Yesterday, I formulated a cunning plan which meant driving the van 35K mid-afternoon to another valley, just above Pelvoux, Vallon de Chambran.

I left the van where the road was still closed at around 1700m and then out with the bike and cycled back, with the only issue being I left my phone in the van. Luckily I remembered after five or so minutes, but I'd managed to descend a fair way. By the time I arrived back in Serre it was just over 41K and 600m of vertical. Strava track log The next issue was that of the weather. Just as I cycled back so the clouds that were forecast started appearing, so by 18:00 it was almost gloomy.

Clouds have an adverse effect on the temps this time of year as it stops the snow from freezing overnight. What we want are clear nights so the snow freezes and then starts to melt in the sunshine in the morning with us hoping to time it just right as it transforms into spring snow. Leave it too long and it turns into porridge.

Within two to three minutes Elaine and I became separated with Elaine taking a route down below me, while I waited thinking she was above me. It was a long ten or so minutes trying to figure out what to do - and not helped by no mobile phone reception. In the end, I carried on skiing down an,d thankfully, there she was waiting for me!

The run down was very sweet (again) though the final part which I was looking forward to (we skinned up it five or so days ago) was a bit of a disappointment.

The last 3K of the run out was quite flat with me utilising my cross country ski technique.

Click on an image to start the gallery up and see descriptions: