Dropping In. A Beer With Travis Rice 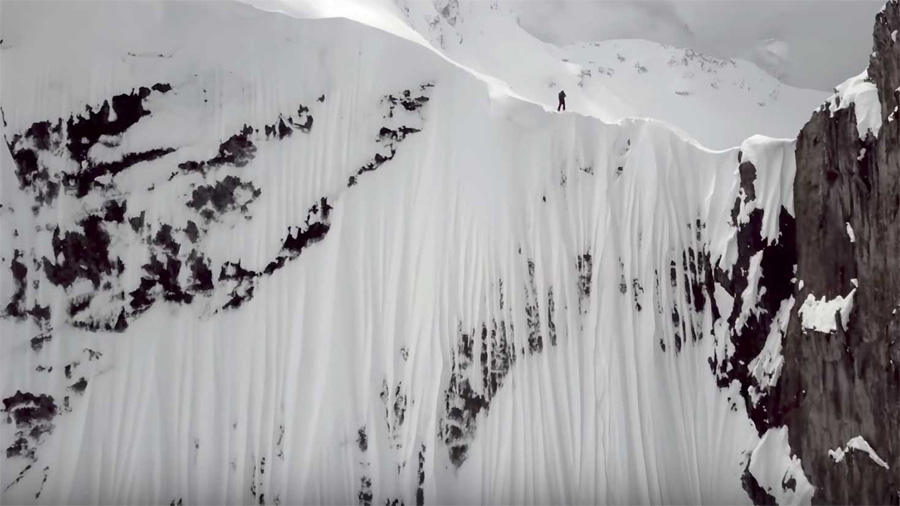 It's not everyday you have a beer and discuss soundtracks with Travis Rice. Our Snowboard Contributor, Mikie Kitaruth reports from the inner circle at the secret private viewing of Depth Perception.

I admire Travis Rice. Is he the hardest working man in the snow world? You would’ve thought a break would be in order after last year's Fourth Phase film and the endless promotion surrounding it, but NO! Like a curve ball being thrown at us, another Travis film comes our way. The question is, after 12 months are we ready for another one?

Now, like I said, I do admire the guy, he is becoming a household name with the likes of Tony Hawk and Kelly Slater by sheer hard work and constantly setting the bar higher each time. I figured I would just grab a copy of this new film on DVD when it got released (I am still recovering from last year's Fourth Phase party) or, for the first time in a while, catch it at a screening open to the public so the fans can get a first glimpse - instead of a room full of industry people talking about work all night.

While doing the rounds at this year's Telegraph Ski & Snowboard Show, I get a phone call asking if I would be interested in going to tonight’s secret screening of the new Travis Rice film, Depth Perception. I had heard that something was going on but it was kept very low key, invite only, select people from the industry, somewhat of an elite crew. Now here I am getting this invite.

I do have to congratulate the guys at Quiksilver and DC, as this was a screening like none I had ever been to before. To start with, I had no idea there was even a mini cinema in the basement of the Covent Garden Hotel! There’s wine in ice buckets, a selection of beers and soft drinks that come attached with a waiter to open, pour and top you up when you are almost empty. That in itself is a winner, but throw another 35 people (including Travis and his crew) into the mix and you have yourself the perfect setting for a screening. It’s one step away from actually having Travis come to your house and pop the DVD in to give you a run through while sittng on your sofa!

The film, Depth Perception, in my opinion is just awesome. I have to admit, I’m not sure I was ready for another Fourth Phase, or what many people thought 'is it just outtakes from the last movie all put together?'. Depth Perception is nothing like the Fourth Phase, I can’t even compare it to The Art of Flight as none of the elements from those films are present, that’s what makes it so good! There are not going to be any SPOILER ALERTS here, simply because I recommend you just see it.

Editor's Note: Sneak preview below, if you really want a taster.

The star of the film isn’t just Travis, as this time the focus is on four riders; Bryan Fox, Austen Sweetin, Travis Rice and the incredible Robin Van Gyn. It feels like it’s more of a back to basics snow film with a light focus around nature while we get to know the riders. There are two reasons why I say the 'incredible Robin Van Gyn', firstly, and without trying to sound sexist in any way, she absolutely SHREDS! I watched her ride like a maniac throughout the entire movie. The second reason is, during drinks after the film we were in mid chat when she just stopped, looked down at my feet and said 'woah shit your ankles are brown'. Yes Robin, I have just come back from a surf trip to the Canaries, thanks for making the whole room look at my brown ankles!

Depth Perception is light-hearted, you will laugh, you will smile, you will definitely take some deep breaths but most of all it will make you want to get out there. To quote Austen: 'The whole idea is to make you want to go riding and do something that’s achievable' and he’s right. After watching this film, I didn’t feel too far away from the Seasonaire lifestyle. We’ve all stayed in those log cabins when the snow has been chucking it down, we’ve all hiked to the top of a ridge and we have all ventured off into the wood on powder days. It felt real! (The lack of RED BULL logo’s plastered throughout the whole thing maybe brought it back down to earth).

Editor's Note 2. Er except on Travis's cap (below).

These four riders are a great combination, they feed off each other and it doesn’t really feel like Travis is 'in charge'. There are no egos or competition as the four personalities are just perfectly suited. Travis is like an excited kid and you can see this while chatting to him that he is proud of his work. Bryan is the opposite, very quiet, reserved and loves riding weird boards, but we bonded over our love for terrible 90’s punk music. Austen is small in size but makes up for that by being larger than life and Robin complements him while being that girl who just lives and breathes the outdoors life and is a definite role model for all female riders. Like I said, I don’t want to sound like that guy, but she really does hold her own in this film (rides way better than any of my friends). All this comes to life in the film, you don’t need to be having a drink with them after to get that feeling, it was just an added bonus they were all there.

As I am standing with Travis leaning on a fire place, discussing the movie and how the soundtrack is perfectly matched, I had to keep pinching myself that these moments don’t happen all that often. As a waiter brings around canapés, we discuss the ups and downs of living in London and that he loves coming to visit, it’s one of his favourite cities. And of course I couldn’t resist the temptation 'we had a selfie last year when I interviewed you, can we have another a year on?' 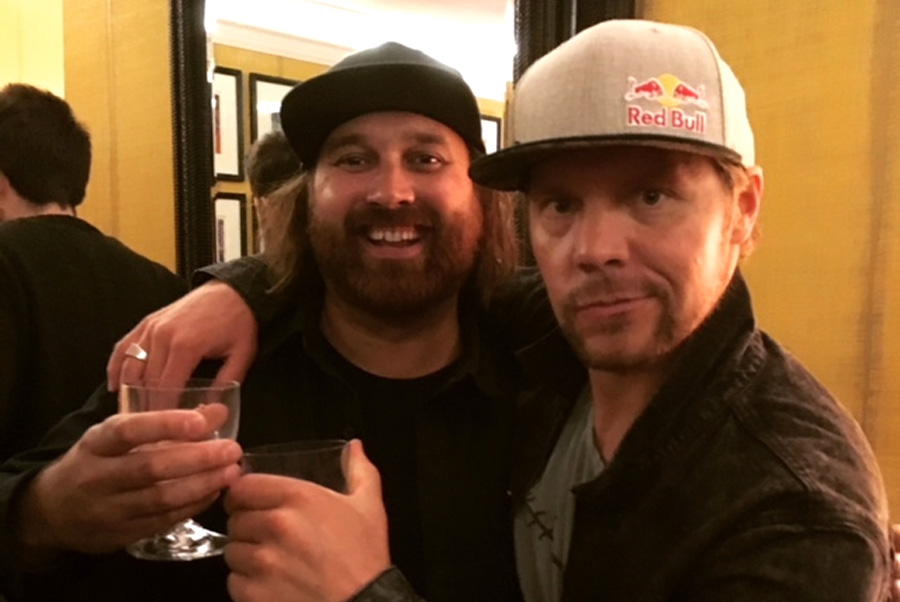 I realise that it almost seems like I’m bragging a little bit, having been at this screening, but the reality is, as I sit writing this, I still feel so lucky to have gone and I am forever grateful to the guys at Quiksilver. The general buzz around the room was how blown away we all were with the film.

It’s not the big budget, huge helicopter production with shot after shot of slow motion footage that we have come to expect, it’s real riding, shot in one place, the depth of British Columbia’s forest, over one winter. The camera work is just incredible, some of the shots are almost too good. Travis did mention, with pride in his voice 'those shots that look like drone follow cam footage is actually me, following the guys with a ridiculously long two metre pole with a camera on the end'. I think a lot of people will be investing in the latest GoPro Hero 6 to try and get the same footage! 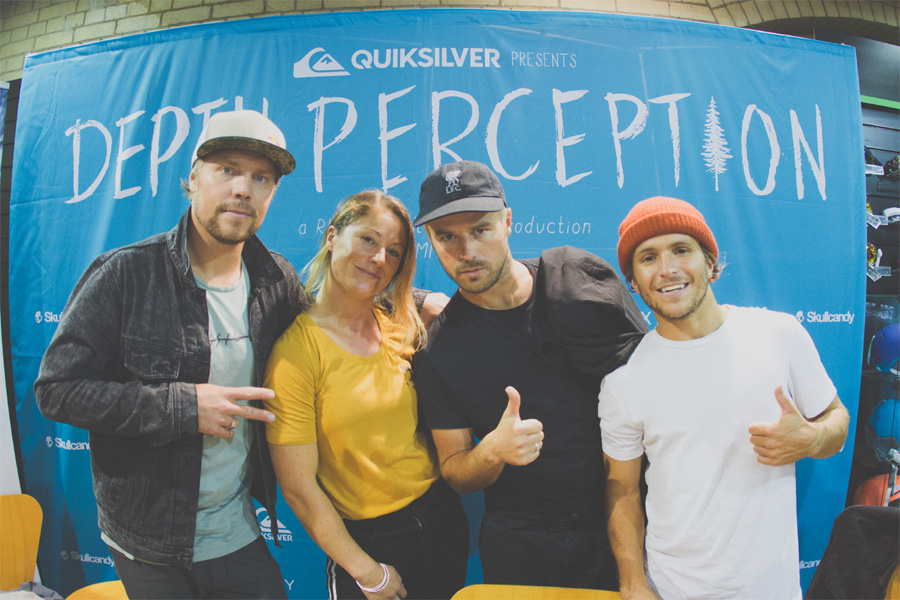 Depth Perception is now available to download. I downloaded it the second it went online. If you want a film that is going to get you amped for this season, then jump on this as I promise you’ll watch it over and over. Having been to the second screening at the Ski and Snowboard Show the following day and seeing it twice I can only assure you that it just gets better. I can’t wait for my third viewing in the comfort of my own home!

Thanks to: Edd Martin from Quiksilver and DC and Hattie from Neon Stash