OFF THE HILL GRANDPA! (OR GRANDMA). CAN YOU BE TOO OLD TO SNOWBOARD? 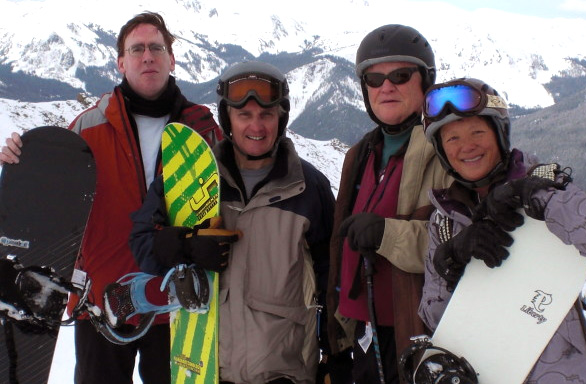 With its dominant park-riding youth vibe, has snowboarding become an ageist sport? Should OABs, Old Age Boarders, get off the hill when they're over the hill? Or turn to skiing? But why golf is not an option.

It's 1990. Nelson Mandela is free from jail, the Berlin Wall's torn down, the Soviet Union has collapsed, Margaret Thatcher resigned, Ice Ice Baby is playing on the radio - and snowboarding is the coolest sport on the planet. Is it any surprise that everyone wanted to become a soft boot sideways rider, even those who had never been to the mountains before or who previously skied?

In their 20s and 30s, this was a supercool active sports generation, Masters of the (Action) Universe, the mountain versions of city trader, Sherman McCoy from the 1990 film adaptation of Tom Wolfe's Bonfire Of The Vanities. They owned the mountains, surfing the snow and pioneering powderbowls like they were, also, ruling the waves on surfboards and windsurfers. And they were pretty good at it, making shredding powder look easy and carving the piste seem so cool that many a skier decided that if you can't beat them, join them, ditching their two planks and tight ski pants to turn sideways and ride in baggy gear.

By the mid-90s Jake Burton was the King of the Mountains and, in 1998, snowboarding debuted in the Winter Olympics. 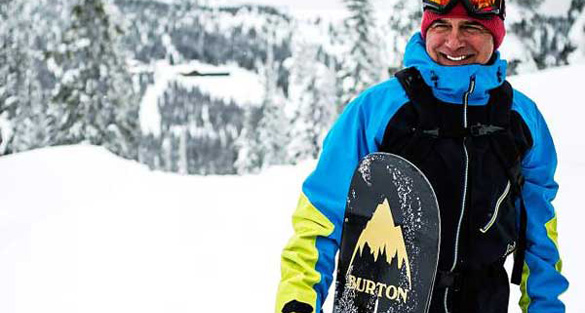 The resorts that frowned on the new sport back in the 80s, gave way to embracing boarders as the future, attracting a younger contingent to the mountains and increasing numbers through the ski pass barriers. Even the ski elitist Aspen reversed its blanket ban on snowboarding in 2001.

Fast forward 25 years from 1990 and what's happened to snowboarding? And the supercool active sports generation? Some have cooled significantly with families and limited finances making expensive mountain holidays a luxury of the past, active life reduced to walking the labrador to the pub.  Masters of Suburbia. Some have crossed to the 'dark' side, skiing, especially as freeride ski design now imitates boards with rocker and width to create float on powder more like snowboarding. And, also let's face it, skiing is so much easier than boarding for getting around the resort especially when accompanying a brood of young kids and/or you're over 40 and packing an extra 10 kilos.

And some have just carried on boarding.

But more super old than super cool, are these still active boarders over the hill age-wise for what is now such a youth-orientated sport? Too uncool for the new school? Snowboarding, these days, is dominated by the 18-24 year olds, skater kids on snow.  So the sight of a 60-something with balding head and beergut shredding on a snowboard is almost as embarrassing as seeing your grandfather whooping it down your local playground slide.

What is particularly unfair is the fact that you would stand up and applaud a game old dude ripping it on skis, like 97 year old George Jedenoff from Utah. 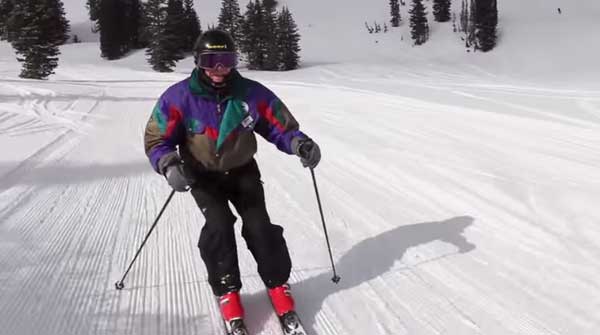 So should there be a cut off age for snowboarding; is there a pivotal point when it's more hip-alignment threatening than hip? If cycling MAMILS (Middle Aged Men In Lycra) are mocked for bulging flesh in tight singlets and shorts, are OABs (Old Aged Boarders) to be smirked at for looking baggy (and we're talking skin as well as pants) on the slopes?

For many the midlife boarding crisis occurs naturally, around the time hairline (for men) and girth begin to recede and grow respectively. Of course, a rad loose-fit snowboard jacket and beanie/helmet can disguise these ageing signs, as goggles can hide a million wrinkles but you can't conceal the epic effort it takes to hang on to draglifts, stand up after a wipe out (especially in powder), let alone stomp a180 off a kicker.

But Brian O'Brien, 62, father of Spencer O'Brien, four times Winter X Games medalist and 2013 Women's Slopestyle World Champion, can show the groms a thing or two in the park, as he proved, killing it in Vail, last year.

Brian O'Brien ripping it at 62

So, of course, there are the exceptions; OABs who defy age barriers and youth exclusivity. Ask the question can you snowboard when you're older and they'll flip you off with a gnarly finger.

There is even a website, grays on trays, extolling the virtues of boarding till your teeth fall out. The pearls of their aged wisdom include 10 reasons why 'snowboarding is better than golf' - and, okay, if you really need to ask, they include, no need for keeping score, no lost balls and a tough snowboarding run is over in minutes, a bad golf round lasts for hours. Here boarders rejoice in snowboarding at any age, even one guy Gustav Garceau riding in Bretton Woods, New Hampshire at 80 years old, insisting that 'instead of mocking the achievements of grown-ups we celebrate them'. 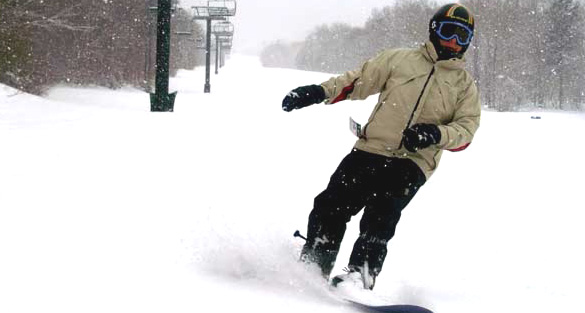 Who can deny that such a fit 80 year old ripping the powder on a snowboard is an awesome sight for sore eyes - and should be congratulated rather than mocked?

There's, also, the fact that some can't cross over to skiing. No, scrub 'can't, it's more like 'won't'. If they never learnt to ski and, ironically, feel too old to start, using two planks is not an option for some older boarders. They know that, however much your knees may be creaking, you're going to look way cooler as an aged snowboarder than a beginner skier.

Equally, is there a cut off age for learning to snowboard? Over 30, maybe think twice? Over 40, maybe think whether you want to go through the steep - and painful - learning curve let alone through a group of derisive teenage park rats? Of course, it's the steep but rapid learning curve that is so attractive about snowboarding, meaning you can be linking turns and looking cooler in a week on a snowboard than years of lessons on skis. But you do need a high pain threshold to get through the wrist-wrenching frontside falls and the head-cracking backside ones, for at least the first three days, which is why the resilience of youth is an advantage.

But, if youth is wasted on the young then, arguably, so is snowboarding where, according to recent figures, 82 per cent are under 34 years old. Jibbing in the park all day is a basic part of youth snowboard culture. But snowboards are made to surf, originally called Snurfers back in 1965 when Sherman Poppen fixed two skis together for his daughters to play on in the snow.

It's riders like Jeremy Jones, now over the 40 year hill, who prove beyond doubt - and mockery - that, out of the park and in the backcountry, there is no age limit to being a sideways rider. Gnarly is as the gnar does. 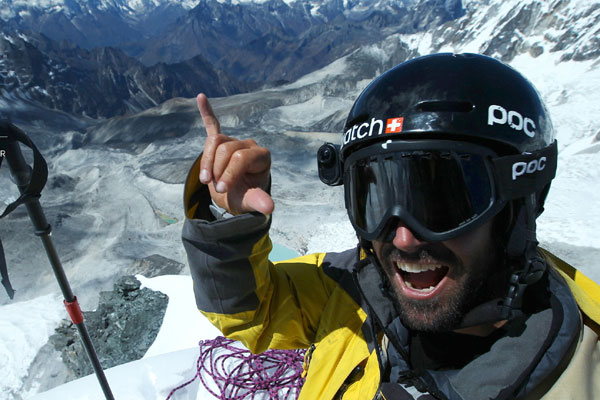 So long as, like Jeremy Jones, you are fit enough to climb 1000 metres and, often, much more a day on a splitboard before shredding down a 40 degree spine.

Problems in trying to forecast snow in the mountains

The Future For Skiing and Snowboarding 2022 and Beyond

Why Ed Leigh is Selling his Snowboard Gear on eBay