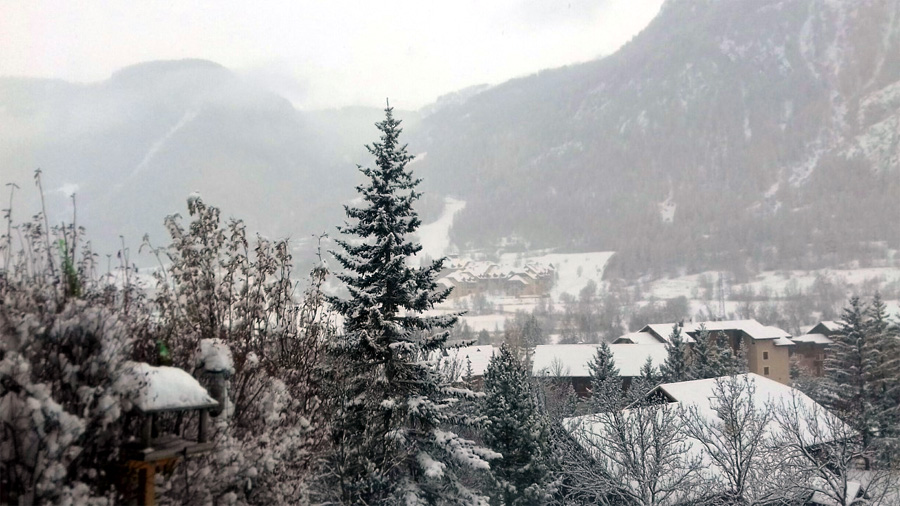 Boom! The snow arrives. Loads of it.

We're no longer just dreaming of a white Christmas or suffering from Comparanoia. We have snow! Also freezing temperatures creating traffic mayhem - and the need for thermals! 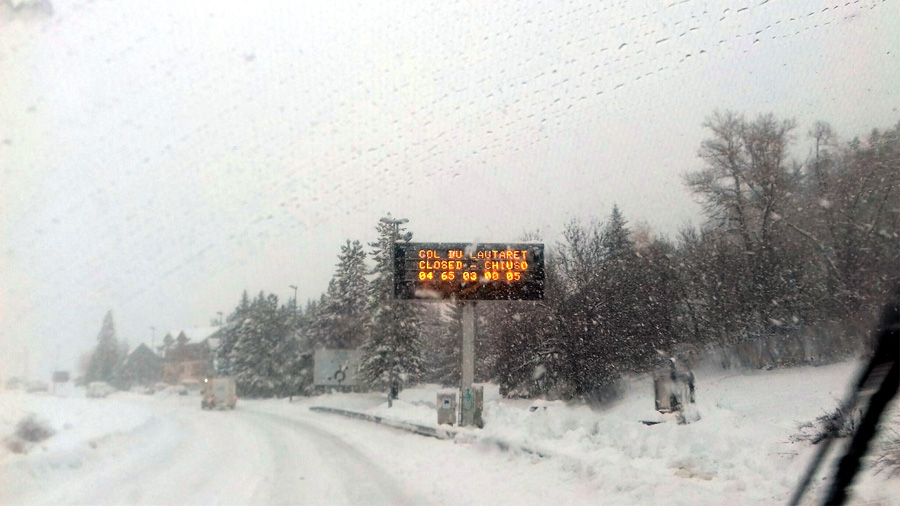 Crazy weather. In the last 36 hours we've had well over 50cm, the majority of that falling from dusk yesterday.

However this morning we had a sharp thaw, or so we thought  as here at 1400m (as per forecast) temps were the wrong side of zero and snow pack was consolidating fast.

We drove down to Briancon 1250m with temps here +0.5C and raining which was surprising in itself, and in our small parking area puddles were 10cm deep.

As we drove towards Briancon I commented how they seemed to have more snow. By the time we were in the centre it was really snowing heavily and -2.00C.

Coming back out I witnessed a number of crazy happenings on the road with the snow puking down and a km from where we live it turned back to rain and the temperature started to rise!

The Col du Lautaret shut early yesterday evening and will probably be closed for a couple of days.

And elsewhere across France especially around Chamonix and Bourg there were horror stories of gridlocked roads.

And it seems it's not just the mountains. Today we've heard from friends driving out today who have been stuck south of Calais for two hours - and have their sandwiches and sleeping bags ready in the car just in case they're there for the night! 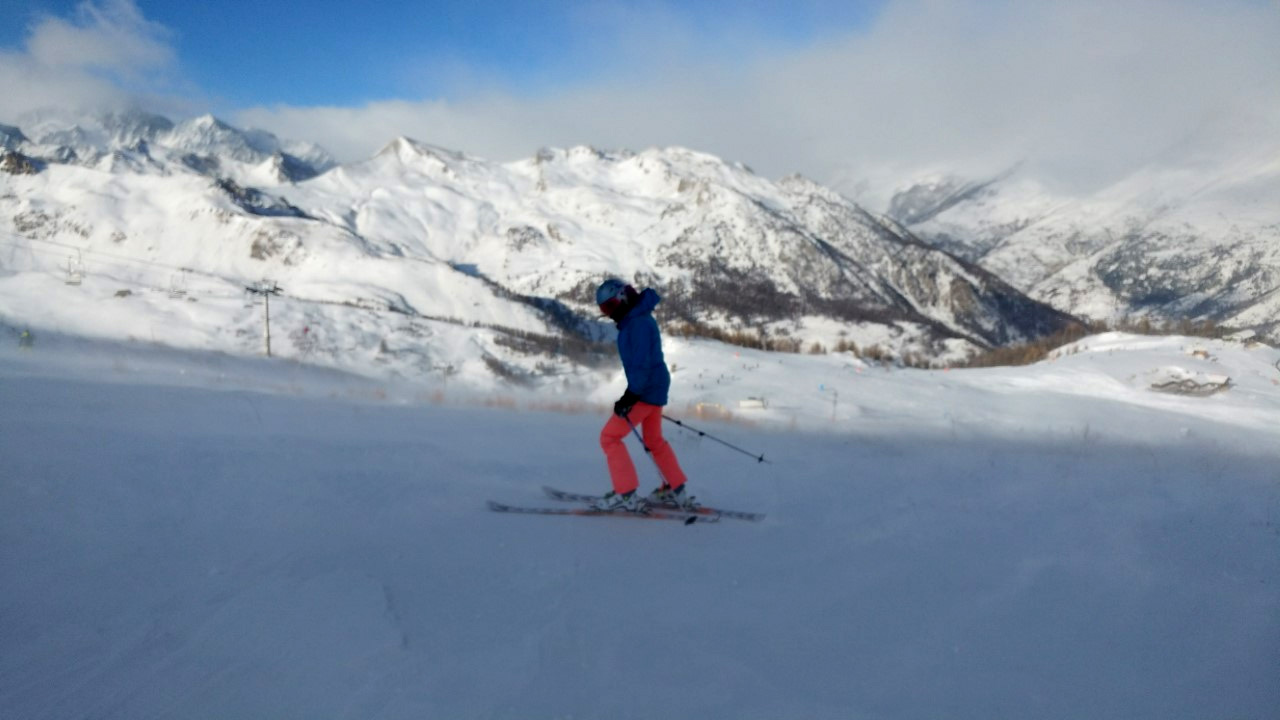 ...When you're at the top of the Foret lift, yesterday (above) wearing a thermal top, one mid-layer, one fleece hoodie, Paramo jacket, Buff, bandana under helmet, goggles, two pairs of ski socks, two pairs of gloves, thermal leggings, Volcom ski pants and you're STILL freezing in a biting cold wind. Last night, the thermometer hit -12C outside our apartment at 1400m,

But, hey, we're in the mountains and it's December; it's the sort of weather you expect and better than unseasonal warm temperatures. AND it's now been snowing all day! How lucky we are to be in the mountains in the snow with the prospect of cold pow rather than sliding on the M25 during Snow Bomb Sunday in the UK.

GOOD FOR THE BASE BUT NOT FOR THE SKIS 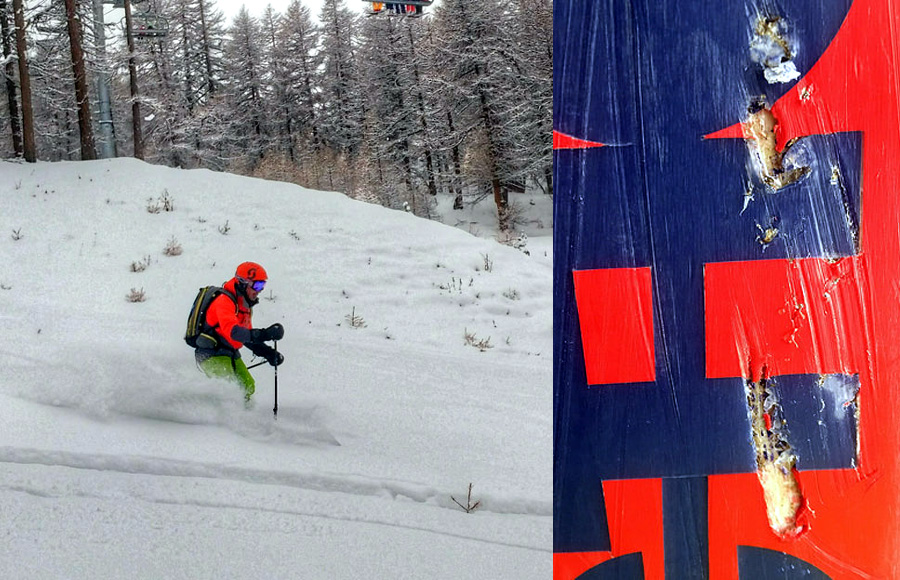 Some good riding was had yesterday in the 10-15cms of fresh and we skied quite a few pistes that were closed but as ever at this time of year it is a lottery as to whether the depth of the snow is adequate, and for some unfortunately that was the case (see Ken and his Faction ski above).

Weather Gods have more snow in the pipeline next week but freezing level could well mean rain in the valley!

So we're no longer just dreaming of a white Christmas. This morning we awoke to the sound of snow ploughs and the resort has become Christmas card perfect. And there's more snow due over the next few days. Here and in the rest of the Alps.

May all your Christmases be white!