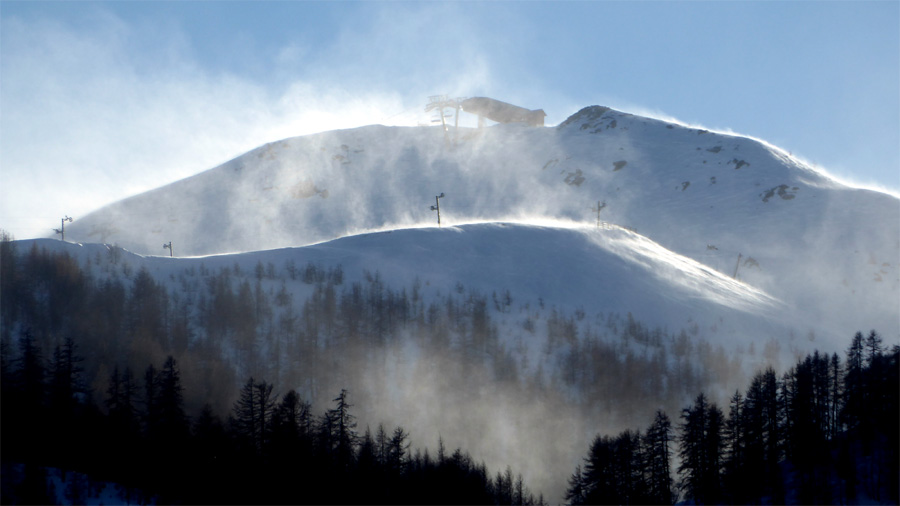 HANDS UP IF YOU WOULD BE HAPPY WITH EPIC SNOW

With biblical weather sweeping the globe, this year, let's be honest, would we mind if epic snow in the mountains followed for this winter? With a weakening Gulf Stream, that is ominous for freezing temps in Europe and another La Nina, there is potential for more extreme weather, which of course could be good news for some ski resorts...

Floods, fires, droughts, deluges, there's been biblical weather around the globe over the summer. Storms in Europe, this July, caused epic floods in Belgium and Germany with landslides and hail stones the size of golf balls. Meanwhile, wildfires have been lighting up the skies, consuming Turkey and Greece.

Globally it was one of the hottest Julys in 142 years of recorded weather, with unusually high temperatures seen in regions from Finland to the United States with the ocean surface 1.67F above the 20th century average, according to NOAA. This is not good news for the planet, let alone our weather systems, which is why our temperatures are swinging like gondolas in the wind.

THE DAY AFTER TOMORROW

According to scientists, a one degree rise in average global temperatures increases the atmosphere's capacity to hold water by 7 percent. This further raises the chance of heavy rainfall.

There is also currently concern that the Gulf Stream is at its weakest in a millennia, approaching a tipping point where it could collapse and push temperatures in Europe down by 18F. This may not happen the day after tomorrow but it's not a million days away from the doomsday film scenario.

But, let's be honest, would we mind a slight drop in temperatures and an increase in precipitation in the mountains, this winter? If the atmosphere's water retention releases as epic snow and the freezing temperatures creates blow pow? No, we'd be high-fiving, getting the fat skis out and thanking Ullr, the Snow God, for smiling so abundantly on us.

In the long term, though, global warming doesn't bode well for Europe and skiing. The glaciers are already melting alarmingly. The creation of 1200 lakes has been recorded in the Swiss Alps since 1850. Apparently 180 of them have transformed in the 10 years from 2006 to 2016, the glaciers losing two percent of their volume just during last year.

There's enough evidence to convince even the most sceptic that winters are warming up with less snow below 2000m meaning that the future of many lower resorts is in jeopardy.

Yeah, yeah so the Earth's not warming that quickly, therefore, actually having no snow below 2000m during a European winter is not going to happen until way in the future. Right? Wrong. A recent United Nations' report has warned that the Earth is likely to warm by 1.5C up to a decade earlier than previously expected, between this year and 2040.

So what about the winter 2021-2022 ski season? There are already forecasts for a geopotential anomaly above Scandinavia towards winter, meaning similar circulation as during spring 2021. Coupled with high pressure above the Atlantic there is the potential for a blast of cold weather early in the season for the Alps and the chance of early snowfalls mirroring the late ones that hit last May. Early snow, though, does not historically mean great winters. Snow droughts often follow in January and February.

But, there's good news for ski areas of North America with another La Nina for the winter to look forward to, at least, if you are in north central and north-west USA and western Canada. For the second year in a row, La Nina is predicted to stoke the hurricanes of the Atlantic and bring bountiful snowfall to the mountains. In the southern ski resorts of USA, though, not so much.

During a typical El Niño phase, much of the Pacific Ocean is characterised by warmer temperatures while La Niña, which is predicted, features a cooling of the Pacific waters. More importantly, especially for those west of the Atlantic, La Niña weakens high atmospheric winds, which allows warm air pockets to grow vertically and develop into hurricanes. A strong La Nina creates drier and warmer conditions across the southern part of North America, with cooler and wetter weather in the north. Hence La Nina is banging snow-wise for the north-west and northern Rockies of the US and western Canada.

In Europe, though, skiers and snowboarders have more chance of accurately predicting winter's snowfall by measuring the height of Alpine ant hills in July, which according to folk lore are always higher if it's going to be a cold season than by using historical data recording La Nina's influence. And, by the way, sadly we didn't come across any high ant hills in the Southern Alps during July, which means the ant communities didn't foresee a need to build skyscrapers to tower above deep snow, this winter.

A scan of El Nino and La Nina activity reveals that very few years coincide with significantly high snowfall in the Alps. During the seven best years in the Northern Alps with over 150 days of more than one metre, 1963 had a mild El Nino, 1975 a strong La Nina, 1977 a weak El Nino and in 1982 there was a very strong El Nino. For the three best snow years in the Southern Alps with more than 150 days of over 50cms, only 1977 was affected by an El Nino, and a weak one at that.

Of course, you could burn all your ski or snowboard gear as a sacrifice to Ullr to bless us with more snow this winter but, then, you'd just be adding to global warming - and Lord knows what that will do to the scalding temperatures in Greece, storms in Germany and melting glaciers.

Beijing Winter Olympics: Why are they controversial?

Winter Olympics host China is being criticised over its human rights record. click here for more