How much snow will there be this ski season 2021? 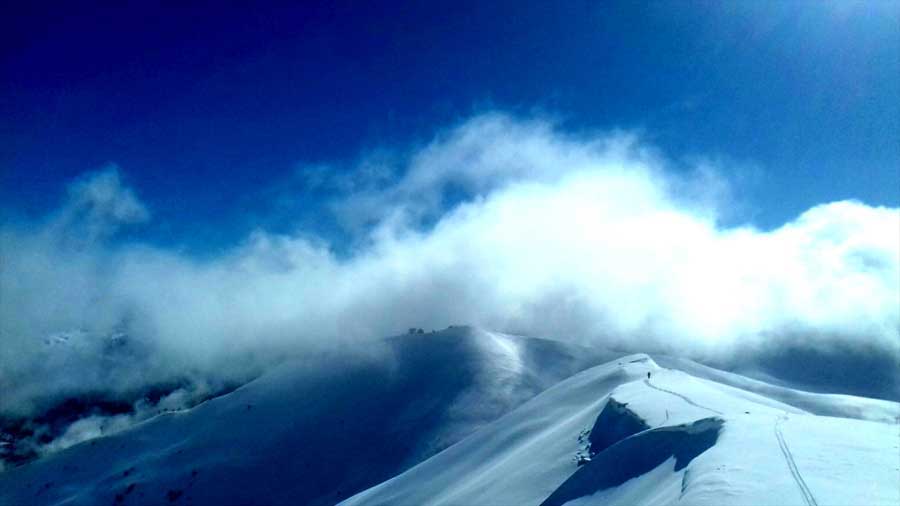 THE SNOW FORECAST FOR THE WINTER SKI SEASON 2021

With a full-blown La Nina forming, the magnetic north moving south, the opening of an ozone hole above the North Pole and a lack of sunspots, there could be climate trouble ahead. Check out the meteorological implications and the hair on a cow's neck for how much snow - and powder - we can expect for this winter's ski season in the Alps...

Style Altitude is known for original content, features that always have an edge. Or two. We write about all aspects of skiing and snowboarding. Visit the rest of our site for the award-winning, daily (well, almost) Ski Blog with ski touring and backcountry reports plus gear reviews, style views and interviews. We have a webcam overlooking the pistes of Serre Chevalier so see the weather and snow cover for yourself here at Style Altitude HQ.

The year 2020 has been gripped by both climate and coronavirus effects. A tsunami wave of heat in the summer in the Alps not only brought tourists flocking and flouting covid-19 infection warnings but also created the threat of an ice block the size of the cathedral in Milan, the Duomo di Milano, crashing down from the Mont Blanc glacier causing a hasty evacuation of inhabitants and tourists from the Aosta valley,

In August, the mercury was also rising in California. The hottest temperature on Earth ever recorded was on 16th August in Death Valley as the thermometer rose to a scorching 130F, according to the US National Weather Service.automated station at the very aptly named Furnace Creek.

So blah blah, what do you care about summer and heatwaves? What really matters, whether you're going to be in Courchevel or Colorado, Kamchatka or Kukusai is how much blow pow we're going to have this winter ski season 2020-21. But let's face it, nowhere is guaranteed these days, not even in the land of the falling pow, Japan, where last winter, sadly for globetrotting powderhounds, the pow hardly fell until mid-February.

SIGNS OF A COLD WINTER

The thing is it's the warming of the Earth - and especially the seas - that affects the weather systems and, ultimately, how cold and wet the winters are predicted to be. Alternatively, you could go by the theory that if the first week in August is particularly hot then a cold winter will follow. Or find an Alpine cow and check if the hair at the nape of its neck is extra thick, a sure sign according to The Farmers' Almanac of cold wintery weather to come. Good luck with the cow's cooperation, by the way.

Of course, we don't just want cold we want precipitation, the moisture to rise from the warm surfaces of the oceans, freeze and fall as light fluffy snowflakes on our mountains in the winter.

But the rise in temperatures has the simple consequence that with a constant level of precipitation, it falls more often in the form of rain than snow, according to the Snow Research Centre, located to the north of Grenoble, at the Col de Porte (1325m above sea level), which has been measuring snow depths every winter since 1961.

In the Alpine massifs as elsewhere, winters are becoming less and less cold. The data provided by Météo France on the measurement stations of Grenoble, Chamonix, Chambéry and Bourg-Saint-Maurice all go in the same direction, that of a warming trend in winters. A particularly visible situation since the 1990s.

In fact, researchers have observed a downward trend in snow cover over the past 30 years. 'Over the period from 1990 to today, we lose 40 percent in snowfall compared to the period 1960-1990,' explains Samuel Morin, director of the Snow Research Centre at Meteo France, referring to the data at the Col de Porte station, which is at the medium altitude, 1325m, the same as 70 percent of ski resorts' lower slopes. For snow cover higher up, Samuel Morin qualifies his observation, 'At high altitude, we do not observe a deficit situation. On the contrary, the higher we go, the more snow is consequent.'

Winter weather watchers will have picked up on the National Oceanic and Atmospheric Administration (NOAA) issuing a La Niña Watch in July, which has now turned into a full-blown La Nina.

Niño or Niña, Boy Child or Girl Child, the Ying and Yang of weather systems, what do they mean for snow? In a typical El Niño phase, much of the Pacific Ocean is characterised by warmer temperatures while La Niña, which we have now, features a cooling of the Pacific waters. More importantly, especially for those west of the Atlantic, La Niña weakens high atmospheric winds, which allows warm air pockets to grow vertically and develop into hurricanes. A strong La Nina creates drier and warmer conditions across the southern part of North America, with cooler and wetter weather in the north. Currently snowier conditions are predicted across the north-west and northern Rockies of the US and western Canada. Good news then for their ski resorts.

WILL LA NINA EFFECT SNOW IN THE ALPS?

But what does it mean in terms of how deep the powder's going to be for us in the Alps? With a 75 percent potential for La Nina should we be waxing the powder skis? Well, with risk of raining on many people's parade/ski resort the answer is no. Check out the figures below:

And here is a table from ggweather showing the years that El Nino and La Nina featured whether weak, moderate, strong or very strong since 1952:

A scan of the figures comparing high snowfall with El Nino and La Nina activity reveals that very few years coincide. During the seven best years in the Northern Alps with over 150 days of more than one metre, 1963 had a mild El Nino, 1975 a strong La Nina, 1977 a weak El Nino and  in 1982 there was a very strong El Nino. For the three best snow years in the Southern Alps with more than 150 days of over 50cms, only 1977 was affected by a weak El Nino.

OTHER INFLUENCES ON THE WEATHER

The presence of La Nina or El Nino, however, is a consideration when put together with other meteorological factors that effect our winters. The classical signature of a La Nina is the strong high-pressure system in the North Pacific, according to Severe Weather Europe,

'We can also see higher pressure over the Polar regions. That is actually favourable for winter conditions, as it means lower pressure in the mid-latitudes and cold air transport into Europe, as seen on the second image, which shows temperature anomalies. We can also see colder air Alaska, western Canada, and the northern United States. But we do have to add, that there is much more at work during winter than just the ENSO phase. We have the general weather circulation, and the stratospheric dynamics of the Polar Vortex (which was very strong this year), stratospheric warming events, etc.'

Meanwhile, the cue for further chaotic weather, is the news that the magnetic North Pole has been moving closer to Siberia. Researchers from the UK and Denmark say they have uncovered the reason for this mysterious movement south. Scientists have been measuring the North Pole's position ever since James Clark Ross first identified it on the Boothia Peninsula in Canada's Nunavut territory in 1831. It went from shifting nine miles at most to as much as 37 miles in a year from 1999 to 2005,according to the researchers. This was the fastest recorded shift of the Earth's north since the mid-16th century and was predicted to cause havoc for aviation and navigation systems, including smartphone apps that use GPS.

And there's more fuel to add to the meteorological mayhem fire (yep, with fuel-burning possibly to blame) with the observation, this year, of the largest ozone hole ever documented above the North Pole, which closed almost as quickly as it formed. The hole reached its maximum size in March some 11 miles above the surface of the Earth. Observed over the Arctic, it beat the previous record hole during the 2011 winter, which as it happens was one of the worst winters for lack of snow levels in the Northern Alps.

If this wasn't enough to reek potential weather chaos, we now find the the sun has suddenly stopped producing sunspots. Since the 17th century, scientists have been measuring the depth of a solar minimum by counting the 'sunspots' — areas of m­agnetic activity on the solar surface which show up as relatively dark spots — and solar flares, large explosions that hurl charged particles into space. The general rule is the fewer the sunspots, the more severe the minimum and the higher the chances of lightning storms, sprites and disruption on Earth.

So far this year, the sun has been 'blank' — with no sunspots — 76 percent of the time, a figure only surpassed once since the 50s, last year, when it was 77 percent blank. So are we heading for a grand solar minimum, a sustained period of decades of weak solar cycles, maybe another mini ice age?

Though shocking for ice cream sellers, this is potentially good news for future ski seasons.