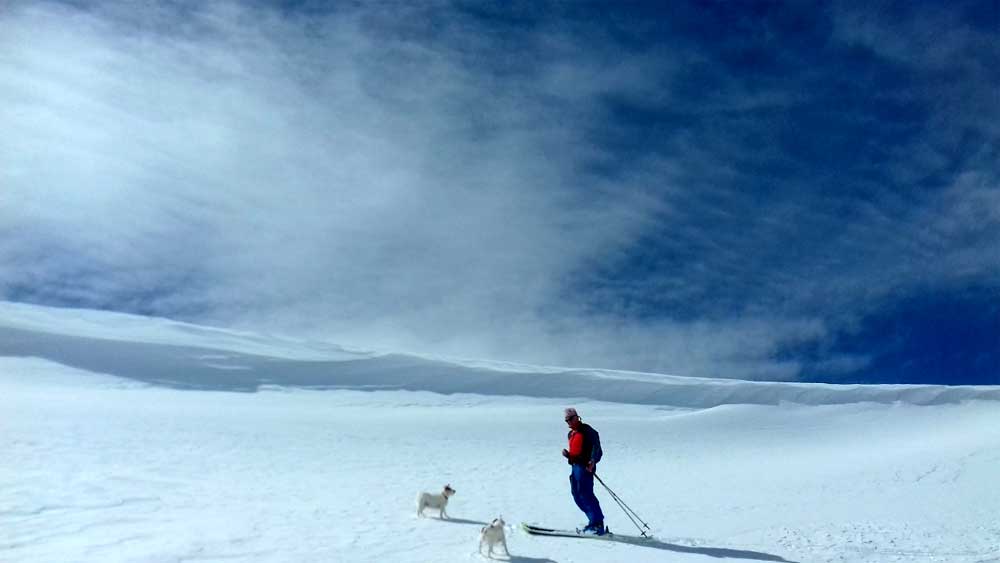 Powder skis waxed and ready? Check out the signs and forecasts for a snowy winter in the Alps.

The snow gods in the Alps were listening to the ski resorts' prayers for the winter season starting in December 2019. They sprinkled the slopes and even the villages in the valleys with sparkly white stuff so everywhere was Christmas card ready for the start of the season - and over the holidays.

As the sun smiled on the resorts, the hills were alive to the sound of the mountain restaurant tills ringing for a record-breaking Christmas and New Year in the Alps.

Only now are the resort managers' smiles being wiped off their faces as they trawl snow forecasts for a sign of a drop of percipitation over the first weeks in January. Yep, there's high pressure dominating over Europe that just won't shift - and the snow's starting to recede like a tsunami tide.

But do you want the good news? Thanks to classic overnight freezing temperatures and warm sunny days, there's now spring snow conditions on south-facing slopes from around midday - and it's January. Bad news, though, if you don't have ski touring kit.

Snovember was truly remarkable seeing snow in low altitude resorts across the Alps, and the Style Altitude Team clocking up eleven ski tour sorties totalling 8,450m vs in 2018 nine sorties and 7,992m, though some days we did two climbs, and unlike last year we did not even have to to go to Siberia.

We kicked off December, especially in the Southern Alps with a major snowfall, and we reckon that nigh on 100cm fell, but due to the temps hovering just above zero, it was very wet and quickly consolidated to 70cm by the next day, still very very impressive for the time of year, and obviously far greater accumulations at altitude..

While there may have been a boom in fat ski sales with the prospect of a great powder season, we're now looking at what is, hopefully, a temporary snow drought. Fat skis? Bring on the carvers with razor sharp edges on the current hard packed pistes. We have learnt that early snow does not mean a perfect powder season. Last winter, for instance, it was looking so good at the beginning like this season and we were ski touring in Serre Chevalier in the Southern Alps on 3rd November and shredding the powder early December. But the rest of the winter was pretty average with far fewer powder days, a dry February and more wind than the year before (although it did stay around until mid-May for ski touring).

This winter we do not have El Nino to give forecasters a weather heads-up for what the rest of the winter will bring. The El Nino effect of 2019 brought major snowfall in the USA, where many ski resorts remained open on Independence Day, 4th July. Mammoth Mountain in the Eastern Sierra had hoped a winter of epic snowfall would allow skiing into August but instead ended its season on 28th July. Mammoth accumulated 718 inches (1,824 centimetres) of snow at its summit and 492 inches (1,250 centimetres) at the main lodge, last winter.

In Europe, it was a different story. 'Because of the weather of this summer, 2 Alpes Loisirs (the ski lift company) can't provide a high qualitative ski product anymore,' announced the resort. There were two main heatwaves with peak temperatures of 19C at 3,200m in Les2Alpes. The resort reluctantly closed the slopes after opening back at the end of June although it had planned to remain open to 25th August.

The atmosphere is certainly capable of wild swings

Weather experts have now declared the El Niño of 2019 is officially over. Near-average conditions in the tropical Pacific indicate that we have returned to ENSO-neutral conditions (neither El Niño or La Niña is present). Predictions are for an ENSO-neutral (50-55 per cent chance) through this Northern Hemisphere winter.

A return to neutral means that we will not get that predictable influence from El Niño or La Niña, but the atmosphere is certainly capable of wild swings without a push from either influence. Basically, ENSO-neutral means that the job of seasonal forecasters gets a bit tougher.

The snow was melting, along with the pavements

The wild swing to high temperatures has Australia sizzling (literally with the bush fires) in record heat and meant that last summer in the USA, the snow was melting, along with the pavements during the hottest days on many records. An experimental weather service forecast projected that nearly 100 local records would be broken in Texas, Oklahoma, parts of the Midwest and a large swath of the East Coast during the heatwave of July 2019.

Meanwhile, the Mexican city of Guadalajara was blasted by a summer hailstorm that dropped up to three feet of ice in some areas. Astonishing photos on 1st July from the region showed a wintry scene in the middle of summer with the city almost entirely covered with ice. Jalisco Governor, Enrique Alfaro Ramirez tweeted, 'Hail more than a metre high, and then we wonder if climate change exists'.

July was the hottest month ever recorded on planet earth,

Experts from the Copernicus Climate Change Service studied European Union data on temperatures across the continent. They found that the European average temperature for June 2019 was higher than for any other June on record - at 2°C (3.6°F) above normal. Top temperature records were smashed in France which saw a new high of 45.9°C (114.6°F), more than 1.5C above the previous record.

According to NOAA,'s National Centres for Environmental Information, July was the hottest month ever recorded on planet earth, the average global temperature reaching 1.71 degrees Fahrenheit above the 20th century average of 60.4 degrees. While this may have been good news for ice cream sales, it was bad news for the ice caps as with these record temperatures the Arctic and Antarctic sea ice shrank to record lows.

It may remind you of a polar coaster.

So where are we going with all this for this ski season 2020? Another season, it seems, of variables. According to the famous Farmer's Almanac predicting the future for the USA, 'this winter will be filled with so many ups and downs on the thermometer, it may remind you of a polar coaster.'

Buying your polar roller coaster tickets for Colorado is a good bet as it's been snowing since October. Winter Park in Colorado is already enjoying the polar coaster ride, opening for the first weekend in November, the earliest in the resort's 80-year history thanks not only to a $4m upgrade in snowmaking machines but also to the early-season snowfalls dropping 40 inches in October.  With 51 inches of total snowfall this month, Big Sky also had a November opening with more than double its usual amount of snow during its third snowiest October in the past 20 years.

Reading Severe Weather Europe in November 2019 there was a high-pressure area focused over Greenland and the Arctic. Lower pressure was displaced a bit further south, along with polar fronts and colder air. This type of pattern is what brought colder and snowy weather to Europe and USA. As Andrej Flis commented in his long-range forecast: 'If you love winter and you want snow, and you happen to live in Europe or USA, this is what you want to see in the forecasts. The problem we have is the large low-pressure area in the North Pacific. That is a more typical feature for a proper stronger El Nino, and is completely opposite of (sic)  what the latest long-range model forecasts are calculating'.

And here's a weather warning

So the weather experts are scratching their heads, putting together statistics, tearing them up, rewriting their forecasts as enlightened as we are counting red berries on the bushes in the autumn to predict the winter in the mountains. And here's a weather warning, no long-range snow forecast is going to be completely accurate and we'll all believe the ones we want to be true as in predicting metres of light powdery snow falling throughout the ski season 2020.

Of course, you could burn all your ski or snowboard gear as a sacrifice to the snow gods but, then, you'd  just be adding to global warming - and Lord knows what that will do to the scalding temperatures in Australia, melting snowcaps and future snowfalls.

But weather researchers are now saying the probability of El Niño in 2020 is around 80 percent. So book now for winter 2020-21.

For regular weather updates in the Alps with live webcam in Serre Chevalier click here.

At this time of the year when the pistes are empty and are in glorious condition along with no queues if you put your mind and legs to it you can cover - and log - quite a few kilometres...more

What's the snow like for touring in the Alps at the moment. Is there still cold powder? Or even spring snow? After no fresh snow, strong wind, cold nights and sunny days, here's your answer...more

No more holiday hordes but also no more snow

With so many people on holiday, the only options to avoid long queues were either first lifts and then try to stay ahead of the hordes and when it was too much return to base. Or go ski touring...more

There is a massive faff factor when filming skiing with a drone, DJI Spark as opposed to using, say, a GoPro, but the results can be so much better. However there are operator rules to follow...more

With the help of Sacha Pourreau of Intersport's Le Cheval Blanc and his tech team in Val Thorens we set out to see if a ski touring boot really could perform with a dedicated piste ski.more

SNOW FORECAST FOR THE ALPS WINTER 2020. Powder skis waxed and ready? Check out the signs - and the forecasts - for a snowy winter in the Alps.more

GAME OF ZONES - EPIC V IKON SKI PASSES. With more than a thousand entries, over 1.8m users of the hashtag #epicdreamjob and a plethora of likes, shares, tweets, comments and media features, has Epic slam-dunked for media victorymore