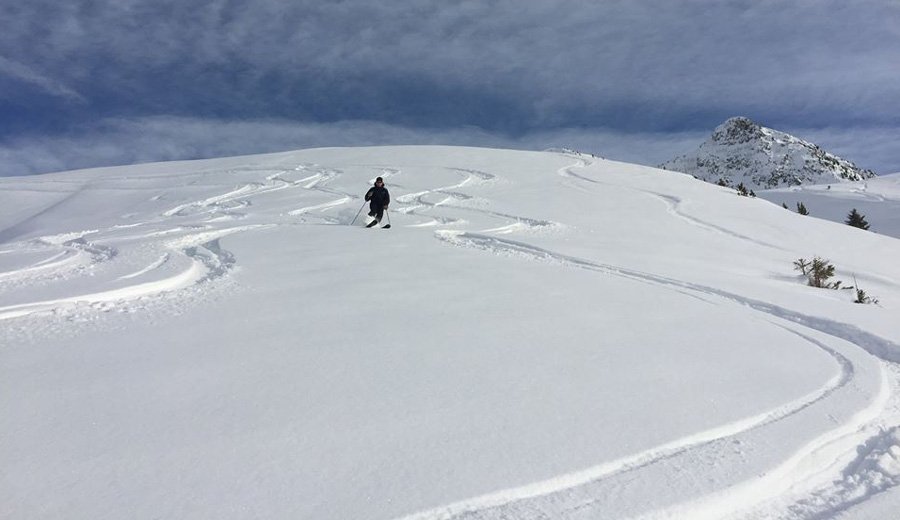 This winter he will have done as many seasons as Game of Thrones, but it took leading a Ski Club group of powder hounds to restore Chris Tomlinson's faith in skiing

How does 'a geriatric ski-bum who’d lost his desire to go skiing' get his mojo back? Chris Tomlinson, author of Skiing With Demons, finds that fresh powder is perfect for restoring faith in skiing although not so great for the knees

Tax returns and divorce aside, doing something for the first time is always exciting. Unfortunately, with age, it’s an increasingly rare experience. By 50, not only have you done quite a lot of stuff already, but the stuff that you haven’t done becomes increasingly less feasible.

So imagine my almost uncontrollable excitement to be boarding a National Express coach for the first time. I was bound for Heathrow and then Les Arcs, heading for a bit of pre-season Ski Club leading - about which I was worryingly ambivalent.

The Divine Comedy were at fault for raising my expectations. Their 1999 hit ‘National Express’ suggested that, 'if your life is a mess, take the National Express and smile'. After taking my seat amongst the sleeping and largely unwashed students, I started to suspect the lyric was sarcastic.

The ambivalence was my own fault. The Ski Club gig was an unexpected bonus, filling in for an injured colleague. It meant that my eighth consecutive winter in the Alps would start two weeks earlier - yet it felt more like two weeks less reprieve.

While listening to the cacophony of tinny percussion emitting from the myriad of headphones I wondered if any of the youths around me had been, or would be, Seasonaires. I couldn’t imagine a more exciting and downright fun way to spend a winter, so why did I have misgivings about my eighth?

Was it simply that I was outfaced by the journey ahead? Getting to the top of a slippery mountain, correctly dressed and suitably equipped takes a herculean effort. Even though you’re visiting the country next door, it can take half a lifetime to get to some ski resorts – or so it seems. Burdened with skis, boots and other bulky specialist clothing, it feels like you’re going on an expedition not a holiday - which is very exciting the first time, not so much when you’re a regular alpine commuter.

Now it feels like I’m passing through a refugee camp, strewn with exhausted and dislocated humans

I remember the first time I arrived at Geneva Airport. I was so excited about passing through such a cosmopolitan capital heading to the playground of the rich. Now it feels like I’m passing through a refugee camp, strewn with exhausted and dislocated humans camped out waiting for delayed flights and lost luggage.

If the EasyJet gods are smiling the flying part of the journey takes around five hours. Less than two hours of this is actually spent in the air; the rest is spent standing in queues and dealing with their officious gatekeepers (some of whom want you to get partially undressed!). But the flight is actually an insignificant part of the expedition. Often more tortuous is the transfer from Geneva to resort which can take as long as four hours by road.

The first time you wind your way up into the mountains your excitement builds, along with the pressure in your bladder. Once you’ve done it a few hundred times, you start to remember the brutalities of living in a frozen world and how once, due to an avalanche blocking the road, your transfer took eight hours.

Now when I climb into a transfer bus, I cross my fingers, along with my legs, and hope the child sat behind me doesn’t vomit and the over-excited first timer sat next to me isn’t a talker.

The first time you arrive in a ski resort you think you’ve found Nivana - a magical Christmas card world that extends the seasonal festivities (eating and drinking) until April. Once you’ve done it a few dozen times, you start to remember the next phase of the expedition and the sweaty hassle involved in hiring skis and procuring lift passes.

Usually, once an explorer achieves his first summit, his foreboding is replaced with euphoria. At this point, the skiing first-timer and the veteran swap emotions. The old hand who can ski well, whoops with joy and soars down the slopes like an eagle. The beginner immediately falls over and suddenly realises the enormity of the task ahead of him – learning to ski.

I’d had all the hassle of skiing, yet none of the soaring-like-an-eagle emotion

Was I ambivalent on this trip simply because the previous season had been a disaster? The Agents of Entropy had been rife and the snow had been rubbish. I’d managed some Girlfriend Skiing in Morzine, on the shrunken and subsequently crowded slopes, but the off piste had largely been brown and there hadn’t been a single powder day - I’d had all the hassle of skiing, yet none of the soaring-like-an-eagle emotion.

But despite my paranoia the journey to Les Arcs was uneventful. This was the first time I’d flown Swiss Air. The flight departed on time and it was a joy to have a large luggage allowance and free ski carriage. When the airhostess, who could actually fit down the isle, offered me a complimentary drink, sandwich and chocolate, I reminisced about the time when flying was fun and a plane was more than just a coach with wings on.

As we approached Les Arcs, I remembered the first time I entered an alpine chalet and felt like I’d found a new home. More recently, as I approach my accommodation I wonder if I’ll find a chalet girl close to meltdown and a stag party in the sauna. This trip I was staying in a purpose built hotel with everything laid-on and none of the above was likely to happen - so this was not to blame for my lack of enthusiasm.

I just wanted to talk about the cricket down-under

The Hôtel du Golf (Les Arc 1800) was half empty and until we arrived, was mostly free of unsavoury characters. Despite a preference for real alpine towns, the purpose built complex was truly ski-in/ski-out and very comfortable – yet my ambivalence still loitered.

Over dinner, not for the first time, I had the mandatory conversations with my group about the merits of helmet wearing and whether skiing was better than boarding. I’d heard all the opinions offered before and really I just wanted to talk about the cricket down-under. Was my ambivalence simply a sign of fatigue from seven years of small talk with mildly interesting strangers?

Being pre-season, the slopes were empty and unusually for the time of year covered in a foot of fresh powder. It seemed like the meteorological gods had decided this snow-season was going to be a cracker. This still didn’t shift my ambivalence despite all the hassle of getting to the slopes being over. It wasn’t until I stepped off the first lift the next day that I ran out of things to grumble about. Better still, I discovered that I was with a bunch of competent off-pistes skiers who were seriously ready to rumble.

Six more days of empty slopes and untracked fields of powder later, I got my skiing mojo fully back, although my knees were complaining. The pre-season trip had been the perfect tonic for a geriatric ski-bum who’d lost his desire to go skiing.

The transfer home was uneventful, apart from a mid-journey stop at McDonald’s near Annecy. I’m not sure why the driver chose this venue other than for its easy parking. The place was packed with young families heading to the slopes for Christmas – making it look and feel like a UNICEF food drop. I thanked the skiing gods once more, for not making me share the slopes with them.

My last ski trip wasn’t exciting like the first, but it was certainly more rewarding. It’s simply down to luck if your skiing holiday is a success or leaves you with bitter memories. For serial Seasonaires each winter is just a bigger version of the same gamble - unless, like me, you believe malevolent entities are at work and they are out to get you.

Despite Geneva Airport being a heaving mass, the Swiss got my flight away on time upholding their national reputation. I soon found myself, for only the second time, sitting on a National Express coach heading to Birmingham. This time, as the Divine Comedy had predicted, I was indeed smiling.