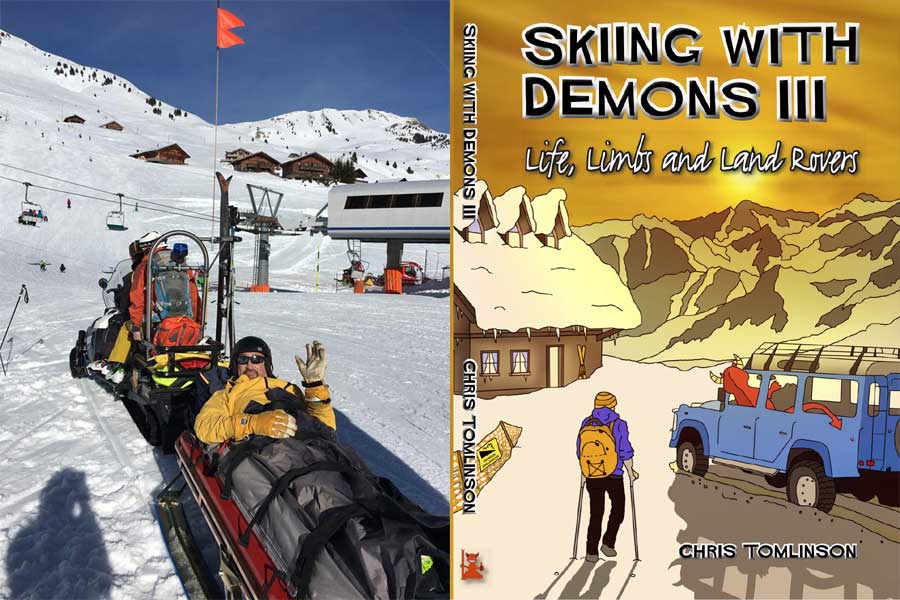 Like J K Rowling's final Harry Potter and the last episode of Game of Thrones, fans have been holding their breath for the third book in the trilogy, Skiing with Demons.

So drum roll, please, for author Chris Tomlinson's announcement that Book Three is at the printers. Read here how by nearly losing a limb he gained material for another of his inimitable and humorous narratives about life and skiing, featuring more demons than in Philip Pullman's His Dark Materials.

Good things come in threes. Things that come in threes are inherently more humorous, satisfying and effective than any other number of things, according to Confucius and his modern day equivalent, Wikipedia. It, therefore, seemed logical for me to produce a third book to complete the trilogy.

However, with only two seasons under my skis since the last narrative ended, there seemed nothing much to write about. The Après Aliens and the other Agents of Entropy had mostly been dormant. I hadn’t been prepared to poke them with my usual life choices either, simply to create material for a third book.

Then on Wednesday, 24th January 2018 the forces of entropy struck and handed me a narrative. In a freak skiing accident my right leg was partially severed, disconnecting my foot from my brain. I was plucked off the mountain by a helicopter and a world of pain, fear and emotional turmoil ensued – a perfect grow bag for humour.

Many skiers find themselves on crutches, usually after knee injuries and fractures. Most survive and return to skiing. Some don’t (ski again that is) but skiing had become the central tenet of my life and, being a drama queen, that life seemed in jeopardy.

If Skiing With Demons I was about a midlife crisis and II was about an existential one, then three would be about an anatomical crisis – trying to gain control of my foot and use it to ski again. Then another crisis presented itself and Skiing With Demons III was on a roll. Assuming I skied again, did I actually want to be a geriatric ski bum? Was it time to end the Chalet Project? - as I called my winter life in the Alps.

Recovering from injury was an interesting, if unwelcome, experience and an untimely one too. Only ten months after the helicopter took off, I had to prove to the Ski Club of Great Britain (SCGB) that I could still ski well enough to continue being one of its leaders.

Skiing with Demons III is a diary of my battle to ski again and retain my blue leader’s jacket. It also contains my deliberations on whether, after eight back-to-back seasons, I should end the Chalet Project and stop living my winter dream. I have interleaved the usual bigoted and politically incorrect observations on skiing people, life and Land Rover Defenders. And, just in case you hadn’t had enough of it, I’ve added more of my chairlift philosophy. I hope it doesn’t disappoint.

A sample chapter from ‘Life Limbs & Land Rover’ can be read here and the book itself can be pre-ordered for Xmas delivery.