HELIED OFF THE HILL? PREPARE TO BRACE YOURSELF FOR LIFE AND SKIING OR SNOWBOARDING AFTER KNEE INJURY 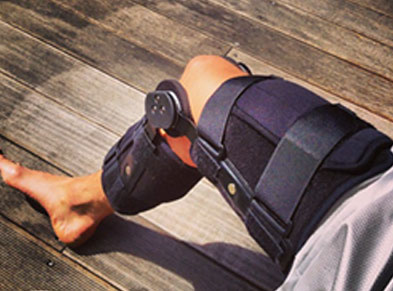 Billy Morgan, Team GB Olympic freestyler (wearing brace, above) had his repaired. Katie Summerhayes also tore hers. So will many a tourist on the slopes, this winter. Skiing, like football, is a common sport for tearing and rupturing ligaments of the knee – ACL (Anterior Cruciate Ligament). Unlike a broken leg, the diagnosis for a torn ACL usually means surgery (if you want to ski again) and nine months of rehab. James Lewis, top consultant orthopaedic surgeon, talks to us about mending the knees...

Knee braces are the new accessory on the mountains. With more people injuring their knee ligaments, whether freestyle pros landing badly from aerials or first season punters falling off a chairlift, knee braces have become the new leg wear.

How many patients do you treat every year for ski related knee injuries?

Approximately 50. It is a little seasonal, but I have consultations throughout the year because some people’s initial injury hasn’t 'settled'.

How do most people tear their knee ligaments when skiing (ie is it their age, their bindings, the snow conditions)?

Generally it is in their first holiday or perhaps second. Some when they are tired, the last run syndrome. Most are low speed rotation injuries, like getting off a chairlift. A preponderance of females. Very few snowboarders.

Can you live and continue to ski with a torn ACL or do you have to have surgery?

Initially the knee is painful and unstable (wobbly). Walking to the bar for a drink is challenge enough. There are different grades of ACL injury depending on how much of the secondary stabilisers are compromised. The ACL is termed a primary stabiliser (against rotation), however, there are secondary stabilisers. It is often the degree of these injuries that dictates whether or not someone will 'cope' with a ruptured ACL. With an isolated ACL rupture some people's knees will respond to time and rehab and function reasonably well except for sports with a rotational element. Some people will ski post ACL rupture in a brace. Most, however, opt to have the ligament reconstructed. The operation is so much more refined than even only three years ago.

How (in simple words) do you repair an ACL?

When the ACL ruptures (tears), it does not heal and unfortunately it can not be stitched back together as the stresses are such that with the newly found laxity any stitches get torn apart. This may change in the future with temporary internal splints / restraints. With current state of the art techniques, the operation takes from 40-60 minutes. The cruciate ligament torn ends (picture two mop ends in miniature) are removed and the bone anchor sites are carefully identified for the new ligament. The ACL is replaced with, well, a spare bit.

The bit of body tissue we can most easily live without are two of the hamstrings termed Gracilis and Semitendinosis. (place your right heel in front of your left foot and pull your right foot backwards, then feel behind your right knee on the inside, those are your hamstrings and there are three of them on the inside of the knee). Alternative 'spare bits' include 10mm of the tendon that runs down from the knee cap with a piece of bone at each end and. also. a separate tissue that runs up from the knee cap. Ninety-nine per cent of UK surgeons use hamstrings. The two hamstrings are approximately 18cm long. When these two fold back on themselves they measure 8-9mm in diameter (two up and a return two down).

A cylindrical tunnel measuring 8 or 9mm to match the hamstring width is drilled through the top of the shin bone to emerge in the middle of the knee in exactly the same place as the original ACL took its origin from. A second tunnel is drilled into the end of the thigh bone, again at the attachment point of the original ACL. The hamstrings are passed up the shin bone tunnel, across the middle of the knee, up the thigh bone tunnel, over a fixation device and then once over, back down across the knee and through the shin bone tunnel. The four strands are then tightened and fixed, often with a special screw.

How long does it take to recover from surgery and get back on the mountain?

In short nine months - you will be good for next season.

What is the fastest recovery you have known?

Some get back at four months with a special ACL protective brace, but such an early return is generally against medical advice due to the risk of re-rupture.

What do you recommend to speed recovery?

Key elements are a positive mindset and early use of an exercise bike post injury to maintain muscle bulk. Also, early use post surgery, 20 minutes twice a day medium resistance works well. The muscles will waste rapidly if given a chance. If you want the ultimate in muscle stimulation then a Complex can make the difference (think those ads with electrodes to stimulate the abs and do the same with the quads). Too much non-bike exercise in the first three months can backfire as it can stretch the new ACL.

Have there been any significant advances in surgery (such as scar reduction)?

Surgery is always evolving. Our understanding of the fixation points has recently improved, quite dramatically in the last two years. New fixation devices on the shin bone have also made a difference. Most surgery is day surgery with full weight bearing encouraged.

Is it essential to wear a brace for a season or two after ACL/MCL surgery?

There is clear evidence that a brace for the first two years post surgery reduces the risk of doing it again significantly. The technology is here for a custom made to measure brace that is delivered eight days after measurement. It fits like a glove.

Will it effect your style of riding (skiing/snowboarding)?

I have worn one. With a custom you soon don't know you have it on. It is carbon fibre, very light and not being metal the temperatures should not be an issue.

Are any braces better than others?

I have tried off the shelf and custom. No surprises here. The custom just fits, doesn't slip down and due to the carbon fibre construct is lighter than some of the aluminium based ones. I have worked with a number of companies, but favour the leader DJO. In the USA 50% of braces are custom, We are a little behind in the UK.

Have you ever injured yourself skiing?

Skewered my ribs on the end on a ski pole in poor light and off-piste in a hollow I just didn't see. Really lucky it was the blunt end. Surprising how effective adrenaline is for two fractured ribs, but off the slopes it hurt!