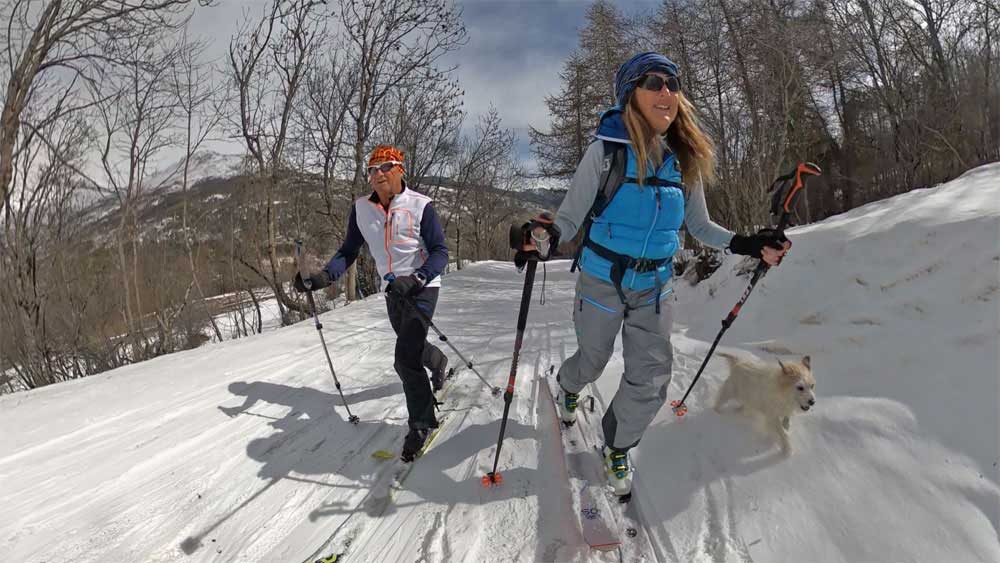 Facing a barbed wire fence on a Triumph TR6 Trophy would be less daunting than jumping the fences to get out of the UK and into France with the current travel restrictions but, yes, The Great Escape is possible...

Yesterday I was skiing for the first time this year. Normally I would have skied practically every day since mid-November, living at STYLE ALTITUDE HQ, Serre Chevalier in the French Alps but, as we all know, there's been nothing normal about life for the past 12 months.

Facing a barbed wire fence on a Triumph TR6 Trophy would be less daunting than jumping all the fences to get to France from the UK with lockdowns on both sides of the Channel, Covid testing and, then, very few flights available. The UK ban on travel for all but essential purposes and the similar restrictions in France for entering were the two biggest hurdles.

Although Gavin escaped in the van with the dogs pre-Brexit with relative ease on 31st December, my Plan A to fly out soon after on EasyJet was scuppered as UK went into a tight lockdown and flights were cancelled. I then had Plan B, a booking with Wizz Air for Gatwick to Grenoble. Wizz Air? More like Thin Air as that's where the flight and my £100 disappeared into.

Yes, I could have taken the train (Plan C) but that meant travelling to and across London for the Eurostar, ditto Paris, then to Oulx in Italy. The potential hazard of Covid infection en route plus the possibility of cancellations meant that I was not keen to put this particular plan into action.

I decided to wait for my first Covid vaccination in the UK as they were rolling out fast and I'd have mine in mid-February. Then it was a case of sitting it out for another three weeks when a level of immunity kicks in and moving to Plan D, booking one of the few routes available to anywhere near the French Alps, which was a BA flight to Nice on  Saturday,13th March (I know, not the most auspicious of dates!).

GETTING A COVID TEST

Thankfully I applied for residency in France, last year, which is a valid reason to travel (with documents to prove it). Getting the required PCR Covid test was more 'compliqué' as it has to be taken within 72 hours of travel, with no guarantee of a result even 48 hours later. It certainly makes a good case for having travel vaccination passports.

Our local private medical clinic was fairly optimistic that if I took a test on Wednesday, I'd have a result by Friday, which was cutting it close for an early Saturday flight but you can't take the test any sooner because of the 72 hour window. However the £200 charge seemed extortionate. British Airways sent out a pre-flight email explaining the new  procedures with a few options for testing. Halo was one of them. With a BA discount, so a cost of £75, they delivered a test kit, collected it the next day and had the result less than 24 hours later. Fortunately, negative!

I left at 4am and arrived ridiculously early thanks to zero traffic at 5.30am, three hours before my flight at Heathrow, where I walked through the echoing halls of a deserted Terminal 5 to check in (not currently available online). 'So why are you travelling?' the woman at check-in asked with all the warmth of a bad cop detective giving me the third degree. Just before she read me my rights, I stuttered that I had (applied) residency in France so I was returning to my home.

'Can you prove it?' She hissed, her fingers twitching to delete me from the BA computer and apply the handcuffs. Fortunately I could, an Attestation d'Enregistrement No 29-92325. Her suspicious slitted eyes flicked over the French text, which she may or may not have understood but, at least, it looked official enough for her to let me have my freedom, I mean, boarding pass.

So what if you don't live in France or have applied for residency? How could you travel to France right now from the UK apart from digging a Tom, Dick or Harry because ssh never say 'tunnel' (see The Great Escape)? Maybe set up a yacht charter company, at least on paper. There were quite a few 30ish single British passengers on the plane who were probably travelling to Nice as crew for private yachts on the Med and mostly able to travel freely during restrictions

But everyone needs a ton of paperwork, which in these days of online travel apps is ironic. How many times did I check the documents I needed according to government websites, many of which differed according to the time of day? Then how many times did I recheck that I had an International Travel Document, Covid test and French Entry Certificate? At the Gate, we all shuffled anxiously through our sheets of paper as a BA announcement asked if we had out Health Certificates. Then on the plane, there was another form, stating our contact details for track and trace, resulting in a frantic scrabble in bags for that ancient luddite tool, a pen.

At Nice, the bored French passport control officers were totally unconcerned as to why we were entering, especially as the day before France had raised the barrier for UK citizens. They ignored all  paperwork and stamped every British passport, with a Gallic shrug if you objected.

Gavin picked me up at the airport, an 8-hour round trip for him but, hey, I'm worth it! We arrived in Serre Chevalier at 5pm just as it started to snow.

I am now isolating for the voluntary seven days as in not seeing anyone except Gavin. My intention was also not to ski tour, which although completely isolated from people, does risk an injury that might result in a heli trip to hospital and potentially spreading Covid, Hopefully this is unlikely following my vaccination (AstraZenica, if you're interested, from which I had no reaction and certainly no blood clot).

On Sunday morning, Gavin suggested we take the dogs and ski tour up Micky, a 600 metre long green run, on my new DPS Pagoda Tour 106s and Xenic bindings, the first time I'd been able to use them so it was a good way to be sure there were no glitches in the set up. We were at the top of the drag in around 15 minutes. The sun was out, there was a dusting of fresh and so, of course, we opted to go a bit further - and, yep, you guessed, it we ended up at Aravet, 600m vertical and around an hour later.

Of course, the lifts aren't working, haven't been all season but there were a few people up the hill. It was Sunday so, naturally, more French weekenders. But I think we all felt privileged- and happy - to be in the mountains - the snowshoers laughing as they slid down an icy section of what would have been the piste, the group on toboggans screaming their woolly hats off as they hurtled down from Aravet, the skiers and snowboarders we hailed going up and down. 'Bonjour'. Indeed, it was a 'good day'.

So why new skis? With all the ski touring that Gav, Ken and I do, I had been aware that my Noridica El Nina 110s and Fritschi Tecton touring bindings were much heavier than the guys' set-ups so I always had a bit more work to do going uphill (except, of course, when one of them has to make first touring tracks in deep pow!). In fact, my Nordicas and bindings weigh in at 2675g compared to Gav's SCOTT Superguides with Xenic bindings at 1906g.

The Pagoda Tour 106s, the latest line from DPS, are somewhat lighter. Together with the Fritschi Xenic 10 bindings, my set-up is now a featherweight 1720g., that's over 900g less, so literally taking the weight off  my feet with every step uphill.

How do they ski? Well, I've always maintained that the best skis are not those that feel great in blow pow or on super-groomed pistes. Any skis, even old wooden ones feel good in perfect conditions. The ultimate skis are ones that work on crap snow, too. Yesterday, coming down there were patches of pure ice thanks to that Saharan layer that has melted and refrozen. Being so light I'd have expected the Pagodas to chatter over the icy and rutted terrain. They felt fine, which I think is a huge accolade.

They also match my new Elevenate ski pants which is a complete coincidence - but also a bonus! And so is the snow that's been falling all day. The temptation to go out is huge but so is the potential for screwing up so I'm actually not going to risk ski touring again until next weekend. 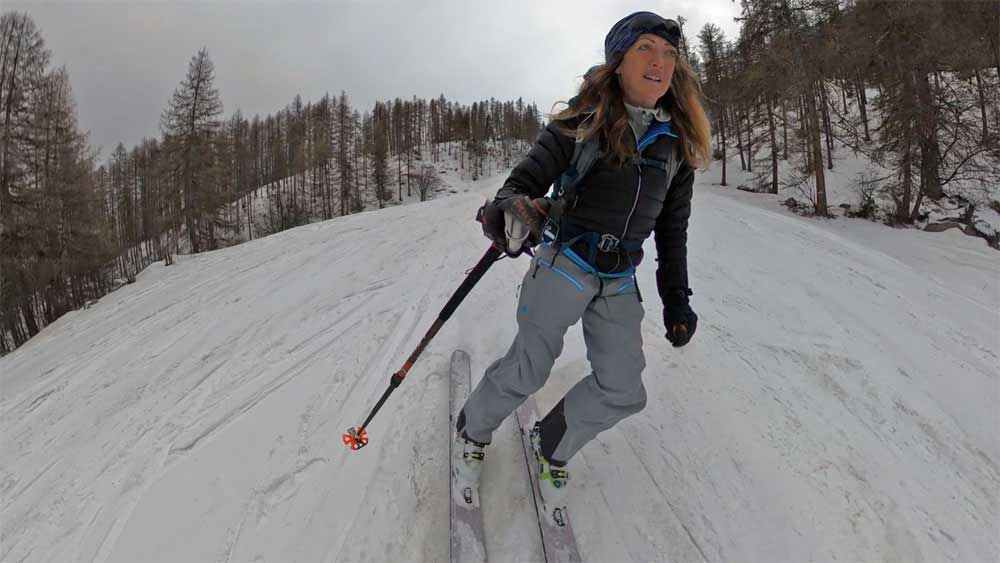