Location Location: Ski Touring When The Snowpack is Dire 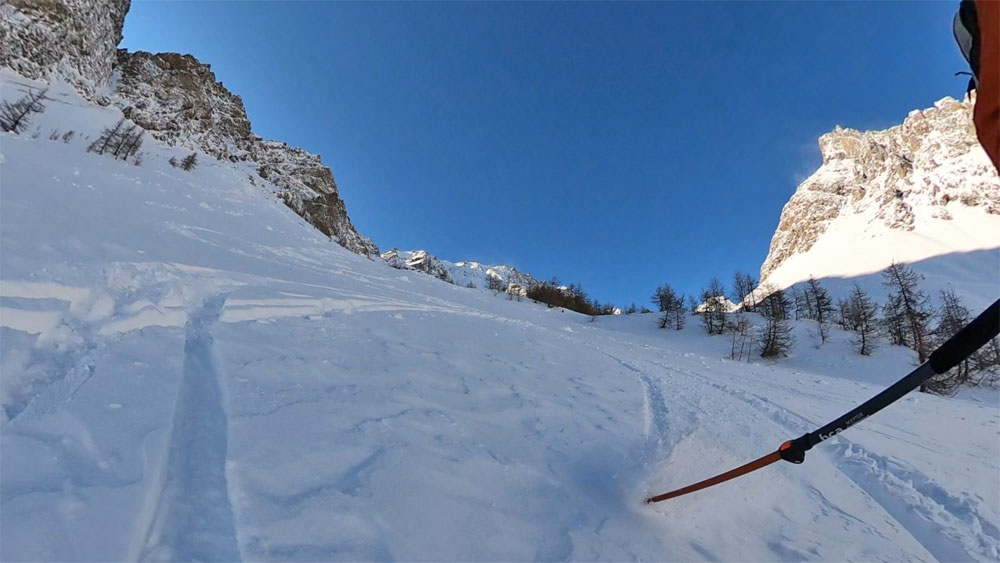 A TALE OF TWO SKI TOURS

Frustration with a poor season means that, after some fresh you then decide on ski routes that usually are fine. However...

As seasons go this has definitely not been the best start to one!

Prior to the metre or so that fell on 7th/8th December, our early season ski touring had been up the pistes that were being prepared for the pre-season weekend openings at Montgenevre, as due to a snow drought the off-piste was almost non-existent here.

After that metre fell we all were optimistic for the season, but that was before strong winds trashed everything off-piste, and then the coup de grâce was a deluge of rain that fell for circa 36 hours and a freezing level of 3,000m, followed by 10 days of sunshine, and freeze-thaw conditions, resulting in boilerplate on the piste and a no-go off-piste scenario.

For sure guides would have been taking out their paying clients over the Christmas/New Year holidays and there might have been some spring snow to be had, but the tree stumps that you see when taking a chairlift are the barometer of what it's like off-piste.

We actually had two days snowing 40cms of good cold powder. So it was up the hill using lifts to ski some of our favourite sectors, however, the winds then kicked in, again. But what we discovered was that skiing in the forest was still a big NO as there was simply not enough cover.

We then opted for a ski tour the following day, taking a forest route that we thought would be the best option being far more protected from the wind in a valley that might just offer some good skiing.

As we skinned up we were really encouraged by the snowpack, and excitement was beginning to stir, though at times there were various signs as to just how shallow the snowpack is, with an inordinate amount of boulders showing through in one sector where normally you might only see a few.

Rather than skiing the forest we decided on the more open faces having assessed that avy risk was not too bad. There was not too much up there to come off as most of it had slid down after the rain and warm temps, leaving strings of avalanche debris across the faces. And that was probably our mistake.

For as we skied what looked like perfect faces of fresh cold powder we were hitting the odd block of frozen snow that had rolled down further from the avalanche field, and then if it wasn't avalanche debris it was the occasional rock, and a myriad of vegetation that would normally be covered by at least another metre of snow!

Exhibit A below, just listen out for the sounds!

So maybe not the best choice of descent as the forest might have offered the better line, but hey you can see there were still some nice turns to be had if you mute the volume :)

The next day, I took a calculated gamble, driving up towards the Col du Lautaret, to suss out the various routes up there, plus we could also take Ullr, our new powderhound, as the day before we were touring in the National Parc des Ecrins and dogs are Interdit.

Being that much higher and more exposed, the question was what effect the strong winds would have had as they were likely to be far more accentuated? We had an agreement that if as we were climbing up the snowpack was dire, with a horrendous croûte, then we would turn back.

What was apparent was the dramatic difference in terrain, this year, as a result of missing at least a metre of snow. Gulleys were frequent, hampering my normal route choice, plus there were windblown cornices built up where you never normally see them.

Even at an altitude of 2,500m, we were seeing terrain obstacles that we never knew existed, and one of the steeper sections where we have to kickturn seemed far narrower as there was not the usual volume of snow.

I'm just hoping that people are not taking the same gamble today as we plan to go back up there tomorrow as Exhibit B demonstrates well :)