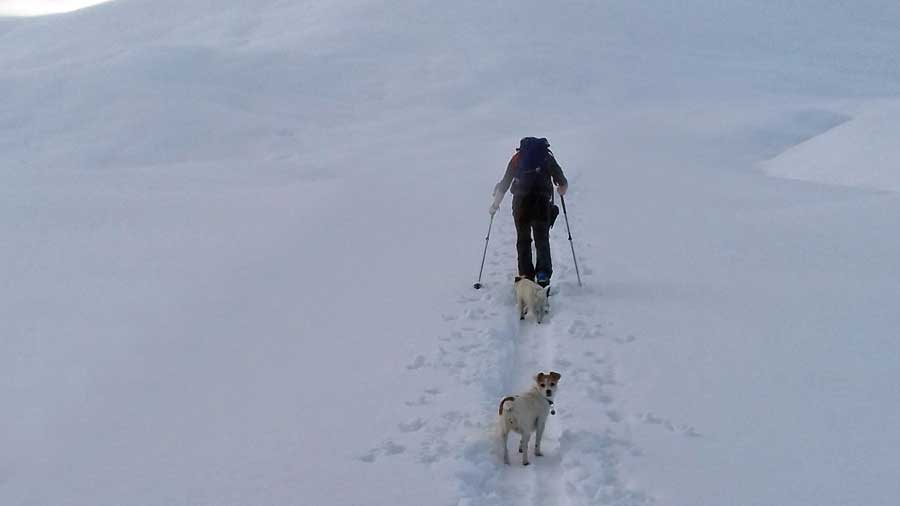 Preparations for Siberia, well that was the excuse

We knew there was a reasonable covering of snow at 1,900m having run up there two days ago but the weather has been grim. However there was a break in the cloud and it was rude not to

We've been patiently waiting for a break in the weather to see if we could make the most of the recent snow fall(s) but the weather has been grim with the mountain summits hidden in dense cloud and rain in the valley.

I've been doing a fair amount of training as I travel to Luzhba, Abakan Siberia on 16th November for a week's ski touring as, at my age, I need all the help I can get!

Hence as the weather has not been than conducive to cycling I've been running, and last Thursday after the snow fall in the Valley we ran to Frejus summer village and there seemed adequate snow cover from 1,900m.

With the new lift being built just up from there the trail for driving is in good condition even with the amount of rain we've had.

The weather did look as if it was starting to clear mid-afternoon, similar to the day before, so we made a hasty decision to get the gear together to ski tour up to the top of the Vallons lift (2,500m) below the Cucumelle, leaving the van at Frejus (1,950m).

Initial snow cover was very thin but enough to skin on, having to take the skis off a couple of times to cross small streams. The Jack Russells were loving the fresh snow hopping and bouncing around in it.

Once we were above 2,100m the snow depth was good and the weather was clearing, but that only lasted around 40 minutes fo,r as we arrived at the top, the sun had sunk over the next ridge and the light was very flat. It did seem to be getting dark.

So a quick transition and into descent mode. We knew from having skinned up that the snow was on the heavy side and along with the dark shadow and flat light the first few turns were a little reserved.

As ever the Rando Chiens were loving it and our confidence grew, skiing the nigh on sludge (thankfully did not have a crust) making the same sort of sound as wet slush you'd find late afternoon in April.

We also knew that all good things must come to an end, and as we skied lower down so we had to be far more careful keeping the skis straight and flat, not using the edges as that's how to hit stones, but we were able to ski all the way back down to the van.

I'm not too sure that I'd rush back up and do it again, but if the sun was shining I'm sure we would, as at the end of the day it's a glorified dog walk!