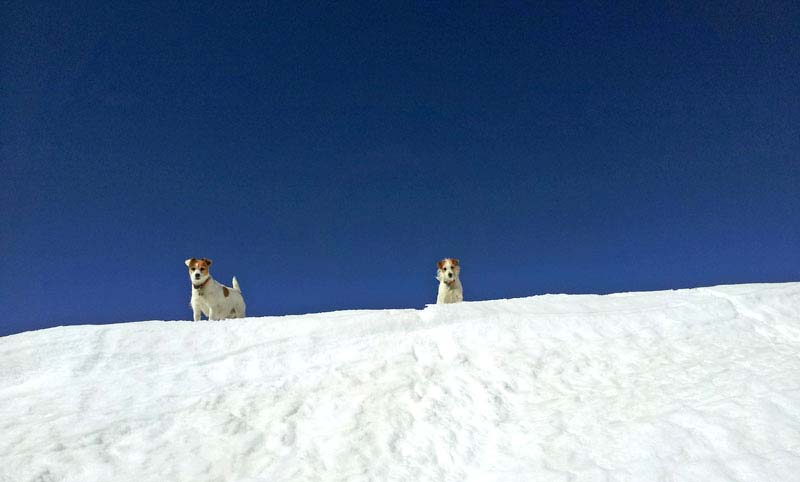 A spring tour to the Trois Evaches with our two Jack Russells, scoping out new routes and lines - and marmots.

A few week ago with some friends who were out along with Per, a mountain guide we know well from La Grave, we climbed to the same ridge. The difference today was that we did not ski off the back down to Villar D'Arene but sought out a route down sniffing out the untracked spring snow I had clocked as we climbed up.

We also started from our usual place where we park up when doing other routes - and a few years back I had taken the same route when I climbed the La Pare near to the Trois Evaches. By the time we arrived there were around 12 cars and most were ahead of us on the various routes up.

The first km was quite devoid of snow at times and I was not relishing the descent. As we climbed higher it did look from all the tracks that a fair number of people had been up, and in the top bowl it was almost tracked out. But I think it must have been kiters going back and forth.

The dogs, as ever, went berserk for the first half hour or so giving chase to every marmot whistle and, this time, almost going down the entrance to their dens. They, eventually, settled down but all that sprinting half way up the mountain side took its toll on young Beanie as on the descent she really lagged behind.

The top part of the descent was as ever not too good, made worse by all the kiters' tracks, but my plan was to traverse across to where I'd seen some nice looking snow and, again, we were not disappointed.

I did mention to Elaine that maybe we might not end up back at the van as better lines might be found that would see us ending up close to the Lautaret. However, as we traversed along the Galibier road, it did seem possible to take a different line down and we had around three pitches in the sweetest of spring snow (untracked) ending up more or less on top of the tunnel one km before the Col, so it was just a quick traverse around and along the old road. Then we popped out 50m from the van.

Brilliant route finding even if I say so myself!