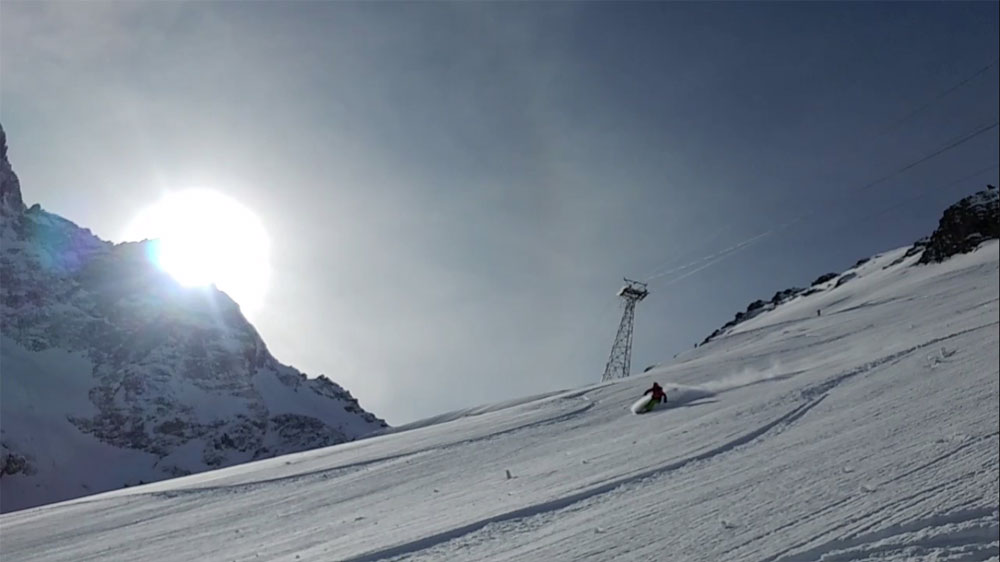 I've been skiing / snowboarding La Grave for over 20 years and I still only know a fraction of the terrain and can still so easliy make a mistake in route finding if not concentrating....

It's been 20 years since I first went to La Grave and, last season, even though I went over there three times the lift remained closed for various reasons.

I'd heard that LG had a better snowfall than here on Thursday and as I have some Scandi friends who are there for a couple of months the plan was to hook up with them.

First mistake was opting to go there on a sunny Friday as Fridays are when many groups from here, Deux Alps and Alpe d'Huez go there as the 'Grand Finale' to their various off piste weeks.

I've never seen it so busy I think we were in the queue for tickets and the lift for well over an hour and it was feckin' freezin'!

However you know that once up on the mountain people tend to disperse very quickly.

We eventually hooked up with my friends at P3 and did a descent off the glacier except that Ken and I were a little discombobulated with regards to the route finding. Then one of the Scandis tore off in front of us so we'd already committed to the line.

It was then that I realised we'd fecked up big time and even though Ken was carrying rope etc it was not a good move. That said there were quite a few groups that had taken another line towards Muretouse but again think that involved rappels maybe.

So just as I was trying to work out what the hell to do (only Ken and I were packing skins and we could climb up over the rock spine rather than the glacier) this skier came round, looked at me and said 'Gavin?' and it was a Mathieu Maynadier who I know well turning up like a Guardian Angel. He explained that we could ski down without the need for rope and we followed him and the three very fast skiers he had, but it was a very tough descent with a gnarly traverse and lots of you don't want to fall slide slipping!

We eventually made it to the road with people having descended the various Girosse couloirs and I got a lift back up to my van, quite an adventure in doing the Classic Chirouze, a first for me!

We then hooked up with another Scandi who had done two seasons and was a very very good skier and he pretty well destroyed me, though I did that myself by taking a stupid line over a small crest into what I thought was soft snow only to ski over a load of rocks falling on my left flank which is now red raw and sore in a couple of places.

So just when you think you're ski fit and can handle most things, a serious big La Grave day will sort you out, though has to be said that Ken and I probably had a good 25+ years on the Scandis.

A little vid of a nice line, but does not take into account the nigh on 15 min traverse to get to it!

Weather was pretty foul but it was snowing.

Decided on taking Les Rando Chiens for a quick hike to see what the snow was actually like. Drove up to the Lautaret and weather was grim, very windy and snow blowing horizontal across the road making for challenging driving conditions.

I actually drove past our usual parking spot just below the gallery tunnel thinking it was a bad move and drove up to the Col and turned round. On the way back I decided if it was Japan we'd be out there. So as I parked up and the dogs became very excited.

Decided only to climb up to Les Mandettes, just over 300m, and twas difficult to pick a line as light was so flat so climbing was more touch and feel with the gradient. Once at the old hut as I went into transition mode so there was actually some blue sky and vis was so good I could see the valley below, and a very nice descent was had in a variable snow pack.