SHE'S FIT. WHY ABS ARE FAB FOR WOMEN 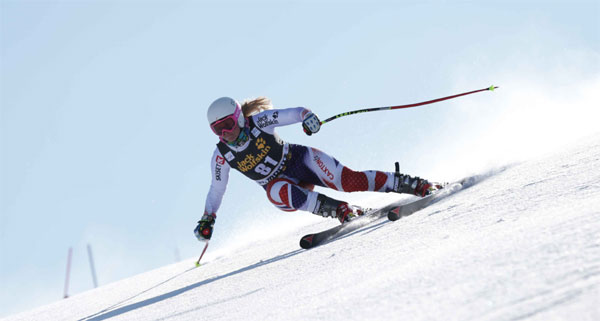 It's not only sports women who want to be 'fit', as in honed bodywise. Today abs have never been more fab. Why we prefer muscle and tone to skin and bone.

It's not only sports women who want to be 'fit', as in honed bodywise. Today abs have never been more fab. Why we prefer muscle and tone to skin and bone. Aesthetically-speaking in the Western world, a flat stomach is an attractive stomach. But In the size-obsessed world of fashion, waif-limbed models live on lettuce leaves in order to avoid fat or bloating and well-covered ribs. You could knock them over with a couture frock's ostrich feather.

An athletic female body has rarely been the aesthetic pin-up of style media and certainly not the fashion world. From Kate Moss to Cara Delevingne, the considered idyllic feminine image is of a concave-stomached, waif-like form (below). The occasional size 12 model is launched onto the catwalk circuit to show a fleeting, and generally begrudging, acceptance of zero-plus sizes but rarely does a fashion show feature a female with anything more toned than her make-up foundation. 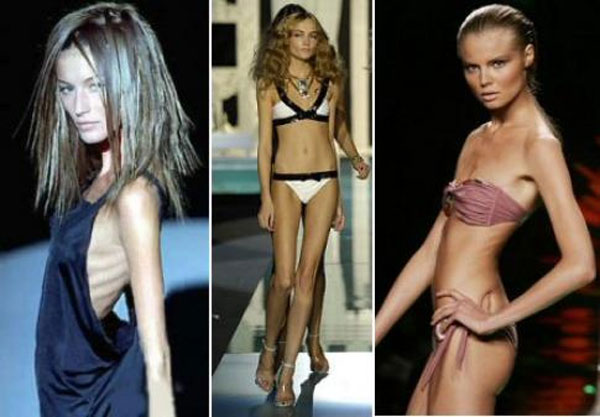 But in contemporary culture there are signs that the tide is turning, The Huntress, as depicted by heroic females in present day movies  such as The Hunger Games, Run Lola Run, Tomb Raider, Kill Bill and Million Dollar Baby, is the epitome of today's respected Performance Woman., according to Bob Sheard partner of the creative agency, FRESH BRITAIN, interviewed by Style Altitude.  'In culture," he points out, 'we avidly consume the Performance Woman'.

Performance Woman icon, Chemmy Alcott, 31, who retired from Alpine ski competitions, last year, tells STYLE ALTITUDE that she is proud of her athletic figure, her shapely derriere – and her abs. After all, they are the result of hours of training every day – and years of honing her body to peak condition for downhill racing. When she was on Dancing On Ice, she was called 'big' by judge Katarina Witt, which created a backlash against such prejudiced media perceptions of athletic bodies like Chemmy's. She did a week of interviews defending her derriere  -' some peope have bum implants, I've got them naturally' - and, then, opened London Fashion Week in a cropped top revealing her perfect abs to the delight of the paparazzi and women's page editors. As she says, 'it was actually a fantastic week for me'.

And for athletic bodies.

WHO WOUD YOU PREFER AS AN ICON?

How much more attractive is a body honed by exercise than starved of nourishment? Who would you prefer as an icon, as a contemporary pin-up for desirable body shape, for a daughter? Chemmy Alcott (seen below creating great curves in Lycra) or a model on the catwalk so thin that you could grate cheese against her protruding ribs?

There was a glimmer of hope for athletic figures in fashion when the spotlight - and magazine pages - focused on the London Olympics in 2012.  Suddenly, every glossy was filled with a flag-flying female athlete poured into a size 8 designer dress. The world marvelled at how glamorous they could look - as if they never wore anything other than vests, shorts and trainers until introduced to a fashion stylist with Julien Macdonald on speed dial. Few marvelled at their beautiful biceps or amazing abs.

Until Jessica Ennis and her perfect torso.

If you do six hours training a day, six days a week, then a six pack like Jessica Ennis is guaranteed, representing a level of fitness that carried her through the seven gruelling events that make up the heptathlon. However, when she talked to Vogue about how she felt about the world’s obsession with her abs, the magazine highlighted the fact that she considered her legs as her best feature.

“Obviously when I'm training I'm not doing it to get a good figure, I'm doing it for my sport, but if I had to pick my best physical feature I'd say my legs - they were really skinny when I was younger but I feel like they've got a bit more shape to them now."

After their fleeting flirtation with athletes and their abs, magazines like Vogue and the designer catwalks have returned to skinny models and their pipe-cleaner limbs. So, even athletically-built girls with lean, toned figures sometimes doubt their body image.

Brittany Saville, 21, (below) has had a six pack for as long as she can remember, achieved from years of running in Junior County Championships and snowboarding. Now at Birmingham University studying sport, exercise and rehabilitation science, she is having doubts about her abs. Why? 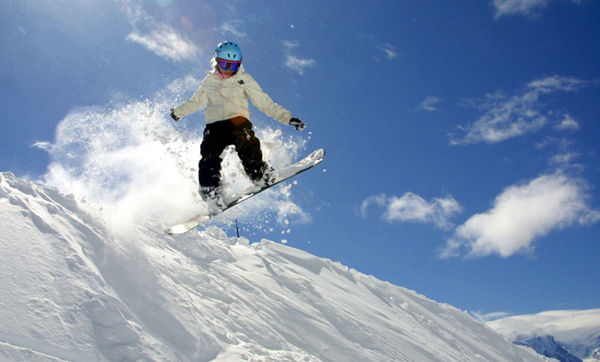 'Since being at uni I've obviously been partying more and my stomach has been on show due to the crop top style fashion. But I've never had negative comments; most people are in awe (surprisingly girls AND guys.) In fact, recently, it has been me thinking my six-pack unattractive. Since taking up climbing in the past months I've found my physique has become more muscly (‘toned’ is a nicer word, ha). 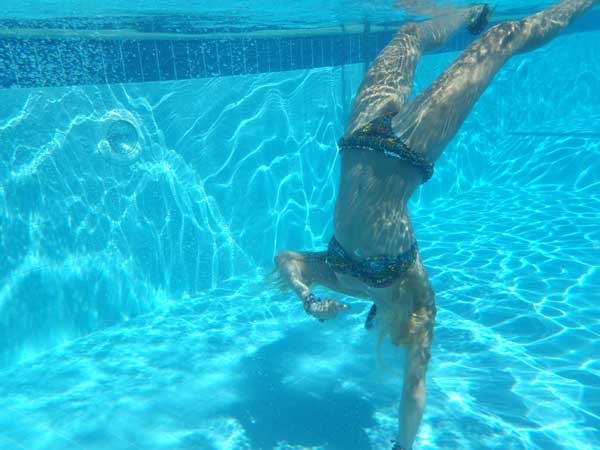 'Thankfully, my boyfriend refers to it as looking 'strong' not ‘muscly’. I've always been jealous of curves and have referred to myself many times as looking a bit like a teenage boy. But, at the end of the day, I'd way rather be able to perform well at every sport I do than worry about what other people think of my body.'

There is  controversy, however, when athletes are promoted for their bodies rather than their prowess. Californian surfer Cori Schumacher blasted a rformer advert by Roxy, timed to coincide with an international surfing contest, saying that it focused too much on women's bodies and not enough on their skills in the water (see close up board waxing, below). She presented a petition containing more than 20,000 signatures to the designer's Orange County offices claiming Roxy is damaging the image of women athletes. 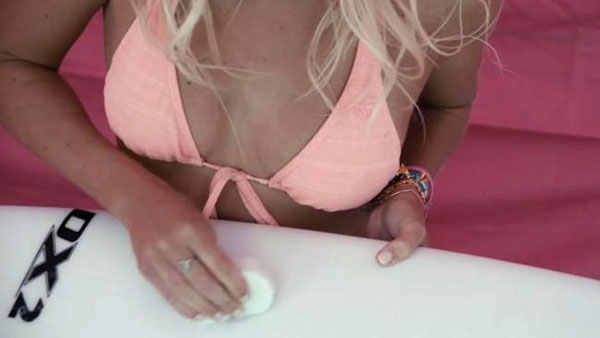 Defending their action, a statement from the company decared: 'We believe all athletes are naturally beautiful, in and out of the water. You certainly don’t have to be sexy to be an athlete, we also believe it’s not wrong to be an athlete and to be sexy, if you choose to be.' But, taking the criticism on board, in a follow up advert Roxy featured champion surfer Stephanie Gilmore showing off her skills - and her face. 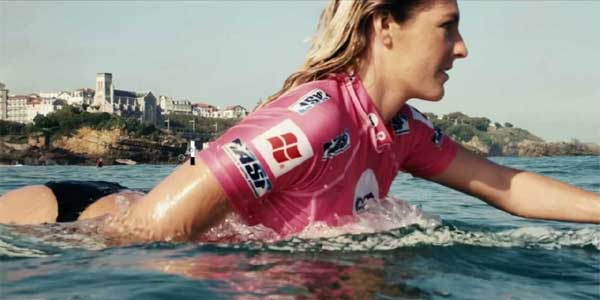 The advantage of muscle and tone with washboard abs is, of course, core strength which is vital for serious athletes – and, also, an advantage for recreational skiing or snowboarding.

Sitting against the wall may be a popular exercise to strengthen thighs but sit ups and crunches, especially using fit balls are also, a great way to increase core strength. And so is planking and yoga. A good test for core strength is to lie on the floor and sit up, then stand without using your hands. If you can do this then high five.

And, whoop, when you stack it in a snow hole you won’t look like a douche, struggling to stand up.