The Ski Blog 9th January: Almost As Good As Japan! 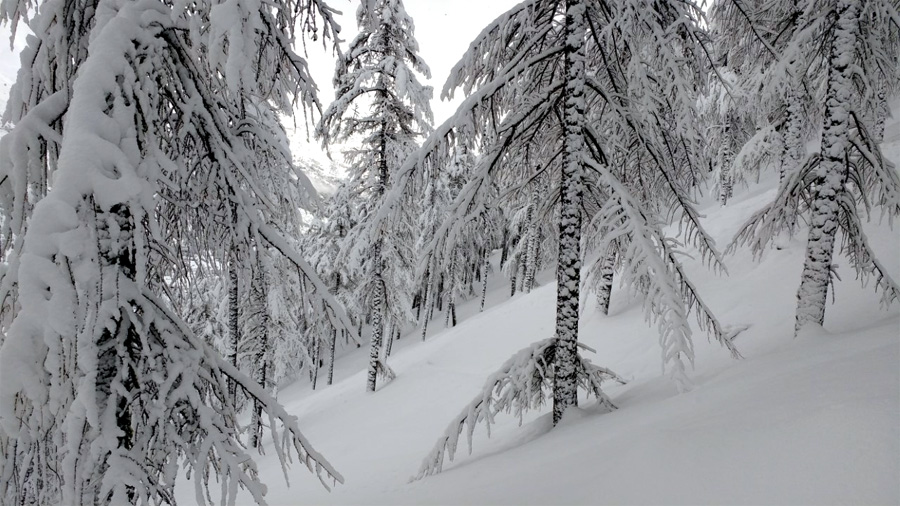 A morning spent skiing knee deep fresh, lapping closed pistes and hiking / skiing the ridge through the trees for an epic run back down to resort.

With snow falling and low vis, it was a good test for goggles and waterproof outerwear before going to Japan in 10 days time. But, hopefully, the snow will be even lighter...

It started to rain and then snow last night so we didn't quite know what we were going to wake up to, this morning. But the plan was to do first lifts anyway come rain or snow.

As it happened it was snow at 08.00 although still rather warm, 1C outside our apartment, so we headed for Monetier where there are fewer people and plenty of trees to play in with the top lifts closed and avalanche warnings throughout the Alps. The vis wasn't great going up the Bachus chair and we were fairly covered in snow by the time we arrived at the top but, whoop, the piste on the right was knee deep in fresh which we shared with a small group of freeriders and then had the trees to ourselves.

Next lap was the secret piste the other side of the drag which was closed and completely untracked (but we had avy bags and triggers ready) and worth three laps before a hot chocolate. What next? Gav wanted to do the Crete des Lauzieres, hiking across at the top of the Bachus but I was slightly intimidated by that exposed ridge in low vis. As it happened there was plenty of visibility which wasn't such a good thing as I'm not sure I want to see that rather gut-wrenching drop either side!  But after a side slip and a kick turn it was only around a 7m ski on the narrowest bit until reaching the safety of the trees..

We had it all to ourselves with only maybe three people doing the long tree run before us. And, okay, the snow did get heavy at the bottom but it was a good test for goggles and waterproof clothing pre going to Japan in 10 days where, hopefully, we'll have that famous Japow! And sushi...