TOUR GUIDE: THE QUEYRAS DURING THE RETOUR D'EST 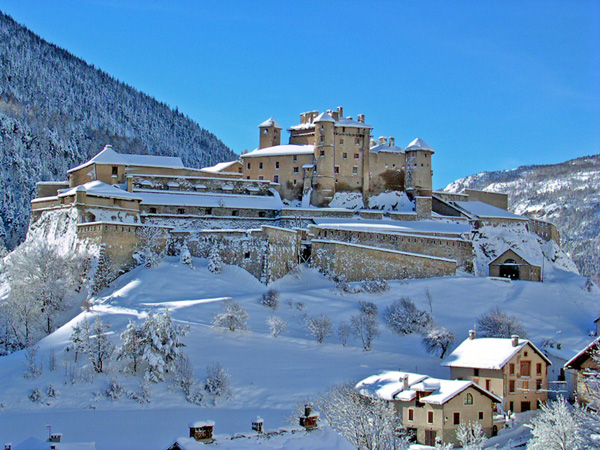 If Carlsberg made a location for ski touring this would be it. The region of the Queyras with small picturesque villages and possibilities of gaining lift assisted height has seemingly limitless potential especially when there are metres of snow during the Retour d'Est.

Just back from a great trip to a very special place. If Carlsberg made a location for ski touring this would be it.

I skied there around five years ago when I drove from here in Serre Chevalier to hook up with a group of Austrians and Italians, and one was Mr Dynafit, a long story, but I met him up in Lyngen (Northern Norway) a few years previously, and stayed in contact. Fritz, back the,n was the technical guru of Dynafit - and it was his father and Fritz who invented the original Dynafit binding.

They had based themselves in one valley for the week and were doing a series of day ski tours in the area and that always seemed a good idea for the future. Then again a few years ago late in the season, we drove over there with some friends but the snow was very poor and it seemed everywhere was closed down. But this time I went further up a valley to Saint Veran, the highest commune in Europe at just over 2000m and there was evidence of a small station with numerous lifts that would obviously give access to some great terrain.

The Queyras is around 90 mins drive from Serre Chevalier and is truly spectacular as you drive past the mighty fortress of Mont-Dauphin turning off the main Gap road at Guillestre, passing the turns to the more well know resorts of Vars and Risoul where a stage from Grenoble will finish this year on Saturday 19th July, having passed through Serre after the Col du Lautaret and then over the Izoard down into the Queyras before the final climb to Risoul.

After Guillestre the road passes through some breath taking scenery of gorges, tunnels, overhangs, and rivers with running rapids and then the stunning Chateau Fort Queyras (see main image, above) which marks that you have entered into the heart of the Queyras.

We stayed just down from Saint Veran, which is the highest commune in Europe at 2042m in the village of Gaudissard at the La Maison de Gaudissard . It's obviously very popular with guides taking groups into the Queyras, be they snow shoers or, like us, ski tourers. Rooms vary from hotel style accommodation to a basic five bed dorm, which suited us just fine.

Food was first class with a wholesome dinner and a substantial breakfast, and a great bar. 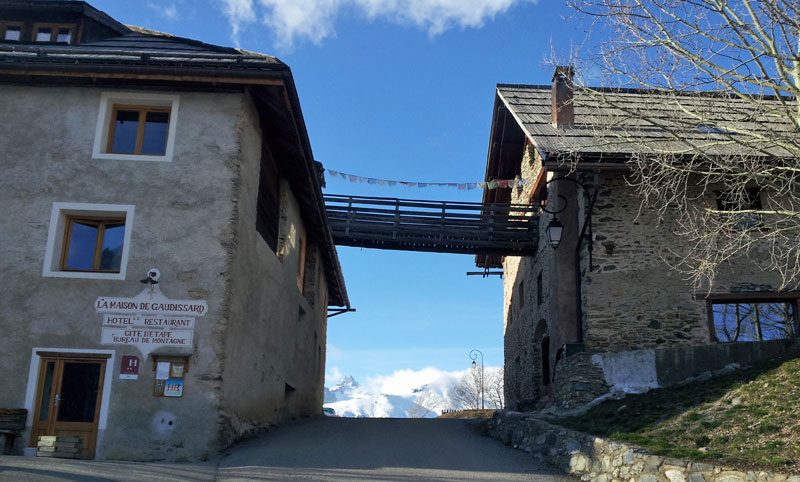 The hills are dotted with small hamlets and the chalets have a unique architecture, looking as if they might simply fall over in strong winds. It almost has a ramshackle Disney film set feel to the place. 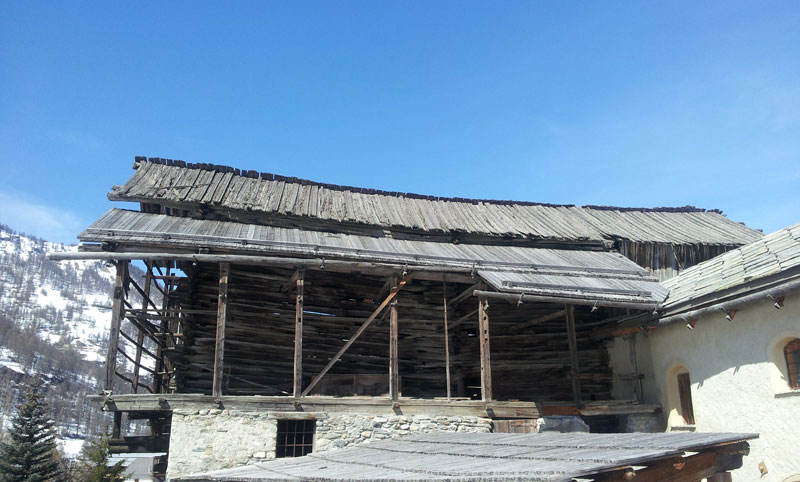 The largest (if you can really use that adjective to describe a ski station in the Queyras) resort of Molines is close by and links to the village of St Veran. The off piste potential is massive.

The week we were there was the final week of the season for Molines with the other stations having closed the previous week - the lift pass for the day was only €13.5 as it's 50% off for the last week. So, for that price, we opted to use the lifts to get some fast height, although ironically the final two lifts we wanted were not working.

Our target for the day was the Observatoire du Pic de Chateaurenard. Climbing up and along the ridge there were any number of other options to descend off the back down couloirs opening out into bowls and trees. 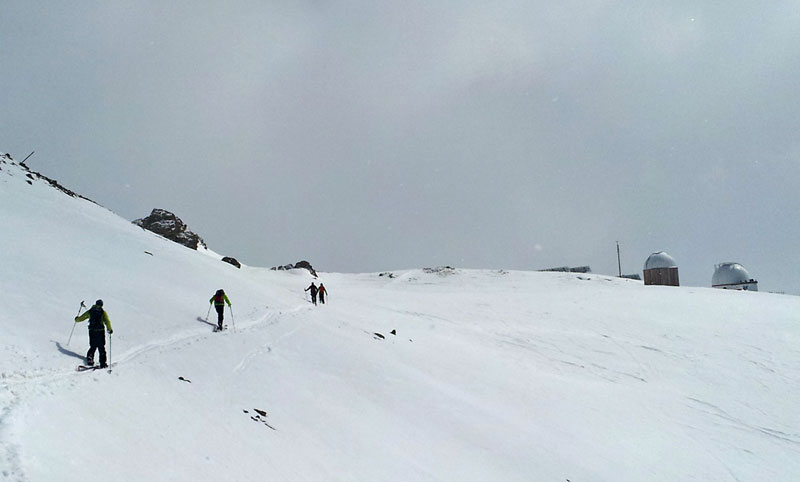 After our picnic at the Observatorie we traversed across to the Col de Longet and had a great descent. We then stopped to admire a couloir before deciding to skin back up to it to get some more lines in.

The run down through the trees afterwards had us all agreeing that it was one of the best tree runs ever - and the viz for most of the day was ideal.  We arrived at a parking area where the road to the Col Agnel is closed in the winter and then had a 4K pole back along the crosscountry track.

Great first day and was such an eye opener to the potential that this area offers.

Second day and we awoke to some light snow - and our plans changed as the locals advised that, if we were to go further towards Italy, there would be more snow as this was the 'retour d'est' and snowfalls of up to a metre in 24hrs are not uncommon. So we headed to the resort of Abries and thought we might be in luck as the chair was working. But it was only for the pisteurs to go up as they were closing the resort down. We even tried offering a suitable charitable donation but no luck.

Snow was already falling much heavier with around 20cm of fresh. We started climbing at 1545m up the piste. Half an hour or so into the climb a piste basher came past and we stuck our thumbs out but again no. We eventually came across said piste basher again, giving a lift to the pisteurs as they were taking all the netting and posts down.

At around 2000m there was nigh on 40cm of fresh and at the summit easily 50cm plus - and when we went over the back easily a metre. Crazy snow!

Down towards the bottom we skied Bois de la Brune trees and, even though the snow was starting to get heavy lower down, it was still fantastic skiing - and ironically enough we ended up just below Le Roux, which is where I originally skied with Mr Dynafit.

Per, our mountain guide, then hitched a lift back to Abries to get the van. Another great day - and who would have thought we'd be skiing that much fresh powder? More can be found about the Retour d'Est weather pattern here that is unique to the Queyras.

Later that night we ended up with some of the local dudes and they loved the fact that we thought this place was just superb and how empty it was. One guy, Antoine, was in his first year as an aspirant guide and he'd been here seven years and said basically there was no better if you were prepared to earn your turns, though the lift system is pretty handy to get you up the hill quicker to access more areas in a day.

Maybe it was not the best of ideas to be still drinking Genepi with them at 01:00 as we had an early start the last day!

We returned to the car park on the Agnel road where we ended up on the first day and started climbing at around 08:00, snow was very crusty and was a concern that maybe the descent was going to be tough. We then gradually started finding stashes of cold snow from around 2,000m and the last 400m was good powder.

Climbing up we were able to look across to our descent and subsequent climb to the couloir from the first day.

At the top there were dramatic views across to Mont Viso. Per did say the descent will be 'heaven' (in the powder) turning to 'hell' in the crust and we managed to lay some great lines down the face that would be testament to our day, and then traversed across to pick up some good spring snow avoiding the 'hell' of the crust.

And then back to the car park to the howling of huskies that were now outside.

So a great three days of skiing in an area that is stupendous - and various other superlatives.

We were lucky with the snow. This year the Queyras has had one of their best ever seasons for snow. Best to be sure that snow cover is good before maybe planning a trip. That said you might be lucky and get the Retour d'Est.

If you are considering skiing, and visiting a different area then you will not find better (in France), though there is another area not too far over in Italy that is rapidly gaining a reputation, Val Maira.

We hope to be back there very soon.

Click on an image to start the gallery up and see descriptions: