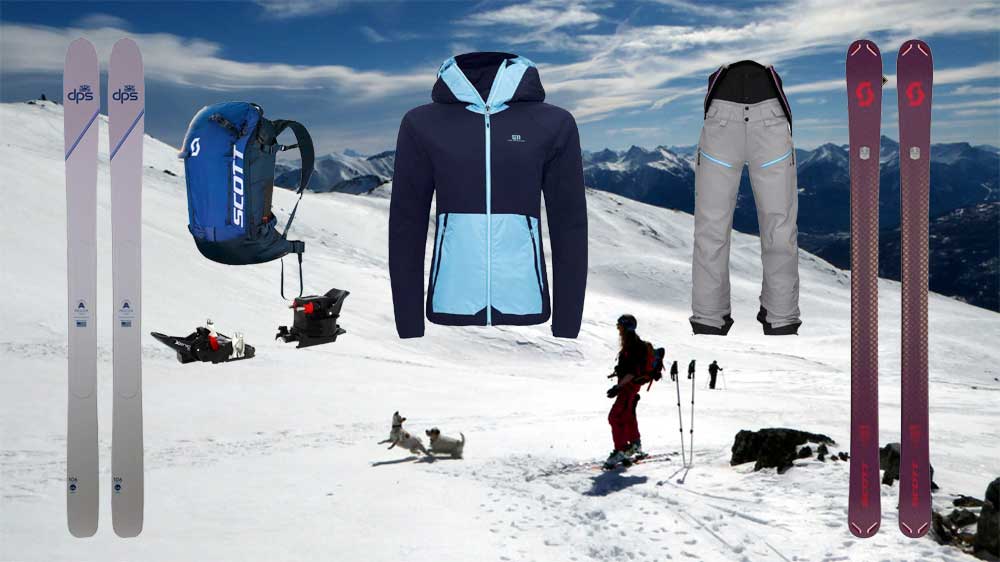 Do we need new ski gear? Will we actually be able to use it any time soon for skiing in the French Alps?

The answer to the first question is actually yes, I do. With all the ski touring that Gav, Ken and I do, I have been aware that my Noridica El Nina 110s and Fritschi Tecton touring bindings are much heavier than the guys' set-ups so I always have a bit more work to do going uphill (except, of course, when one of them has to make first touring tracks in deep pow!). In fact, my Nordicas and bindings weigh in at 2675g compared to Gav's SCOTT Superguides with Xenic bindings at 1906g (see Buzz Light Gear).

The other issue I've had for the past three years with this set up is with my Fritschi Tectons DIN setting not going any lower than 6, which for my weight at 53 kilos is a tad high, as proven last winter when I twice stacked it in heavy powder and, each time, pulled a calf muscle (first left, then right) when the ski didn't release. Each time it took around two weeks for my calf to recover.

So I have been on a mission to find lightweight touring skis, wide enough for powder outings (so at least 105s) to ride with lightweight touring bindings that have toe release and DIN settings down to 5. This is not such an easy task as, it has to be said, there's much more out there for men. I'm not blaming the ski and ski bindings manufacturers because it is a case of demand and supply with there being, hands down, far more demand for men's backcountry touring gear.

To cut a long ski shopping story short, my DPS skis arrived last week, Pagoda Touring 106s. These are the new all singing, all dancing, uphill and downhill Holy Grail for ski tourers, lightweight for going up without effecting performance down in powder. According to DPS, the key to Pagoda Tour’s performance is both in the choice of materials and how they are layered. By mating DPS’ proprietary new carbon laminate with a combination of ash and paulownia woods, and a purpose-built aerospace grade foam – that features incredible physical properties at minimal weight – a special alchemy emerges. The result is a distinct combination of power, energy, and dampness that rivals front-side oriented skis at classic touring weights (watch this space, as in our Ski Blog, for how they tour and ride when I can actually get back out on the snow).

Unlike most lines, the new DPS Pagoda skis do not discriminate between men and women, offering them in 87 through to 112 widths in varying lengths from 155  to184 cms. My 106s are 171cms, two centimetres longer than I'm used to but, hey, will I notice  except maybe on a tight kickturn? They have also come from the US factory complete with the revolutionary Phantom waxless treatment so won't ever need waxing.

For touring bindings, I was seriously looking at the Plum Summit 7 because, halleluiah, this niche French company has actually created bindings for women (and younger, lighter riders) with DIN settings as low as 3.5 but I opted for the Fritschi Xenic 10s as they are somewhat lighter and go down to DIN 4. In total my set-up will be a featherweight 1720g.

I have also bought demos from SCOTT, the women's Scrapper 105s, which don't look like they've touched the snow yet. They have alpine bindings and will be a great alternative to my Nordicas, which I'm going to mount with some Xenics or similar to use for sidecountry skiing and short tours. OK they're not essential for my ski quiver but it was an offer I couldn't refuse. My new SCOTT Alpride 30L bag, though, is essential because the one I had last season is the long version, which sits too low for me (I'm 5'6").

I also have new ski pants and lightweight jacket from my favourite brand, Elevenate. Did I need them? Hell, yeah. When you ski (and tour) all season like we do, ski kit gets five or six months of wear (just five last season thanks to coronavirus stopping play in March) and are never the same after a few washes even re-proofed. It would take someone who goes for one week's holiday over 12 years to wear ski pants as often as I wore mine last season.

As for the second question, will I be able to use my new gear any time soon in the French Alps? The answer is who knows? It definitely won't be until December now that France is in lockdown.