Too Old To Ski? Meet the POWS, Pensioners On Wide Skis 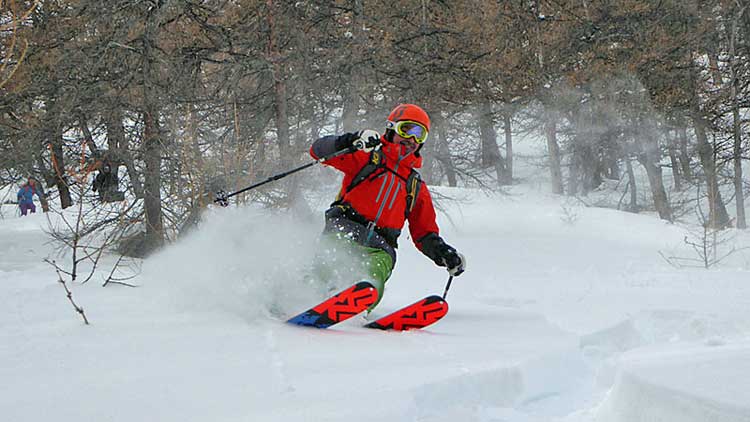 Over the hill? Nope on the hill and off the piste, older skiers are now one of the biggest growth markets for fat skis to shred the pow.

Not only are pensioners skiing into their twilight, no midnight, years but now POWS are heading off piste and shredding the powder on fat skies...

It's been an epic winter in Europe for powder and it's no surprise that there's been a surge in sales of wide waist skis. What  IS maybe surprising is the number of 'fat' skis that have been sold to over 60s who are drawing not just their pensions but also perfect snaking tracks in the powder.

Big Mountain aka fat skis - generally over 100mm waists with tip rocker - designed to 'float' on fresh snow making it a whole lot easier to ski powder, have indeed created a freeride frenzy with the 60 plus taking to fat skis like dentures to gums.

According to the Daily Mail, 'daredevil pensioners are grabbing life by the scruff of the neck and want to try their hand at all manner of extreme pursuits on their bucket list'. Whereas being over 60 once meant not getting over excitied and retiring to play golf or bridge, today being 60 plus means having more spare time AND cash for new adventures. So on that bucket list are: flying a plane, scuba diving, hand gliding, bungee jumping and, at number seven, skiing. Also, flying to the moon, if you're Richard Branson, 67, who's training to be an astronaut for space travelling aboard a soon to be launched Virgin Galactic rocket.

These are the Baby Boomers, the post war babies and the 50s kids, who grew up to become the acronym generation, the 80s YUPpies (Young Upwardly-Mobile Professionals), turning into DINKies (Double Income No Kids) and now, with empty nests again are downwardly mobile shredding off-piste, celebrating apres as DRINKies (Double Retirement Income No Kids).

And now what shall we call these off-piste shredding wrinklies? After a What's App group shout out for a suitable acronym we had PLOPs, Pensioners Loving Off-Piste Powder; OAPS, but as in Older Awesome Powder Shredders and SPOOFS, Sixty Plus Off-Piste On Fat Skis. The vote went to POWS, Pensioners On Wide Skis - well, if you're over 60 would you want to be known for PLOPping in the powder?

Of course, PLOPing wrinklies were not the customers that the marketing managers of K2, Black Crows and Armada had in mind when they created their advertising for Big Mountain skis. 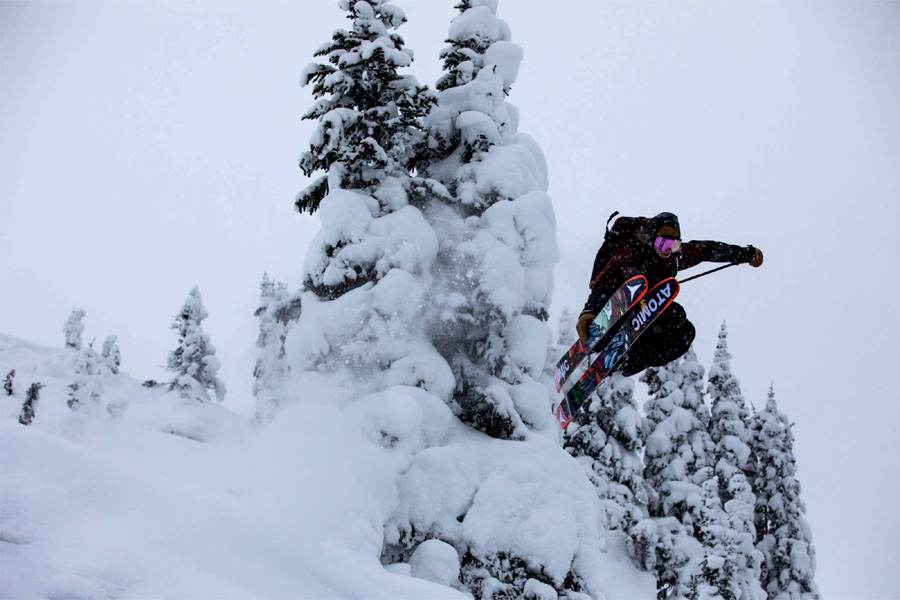 Chris Benchetler, 31, above, is much more the archtypical freerider poster boy for Atomic with whom he created the epic Bent Chetler All Mountain ski with 120mm waist. But he magnimously declares, 'I try to share how I see skiing in such a way that it motivates people, young and old to look at our sport and the terrain with a fresh perspective'.

Well, POWS don't need his motivation. They just need fresh snow and fat skis. Who knows what the actual demographics and average ages are for the fat skis market? But if Serre Chevalier where Style Altitude is based is anything to go by, then it's grand-gnars who are responsible for the recent sales spike, buying fat skis like there's no tomorrow, which when you're over 60 is a definite consideration. 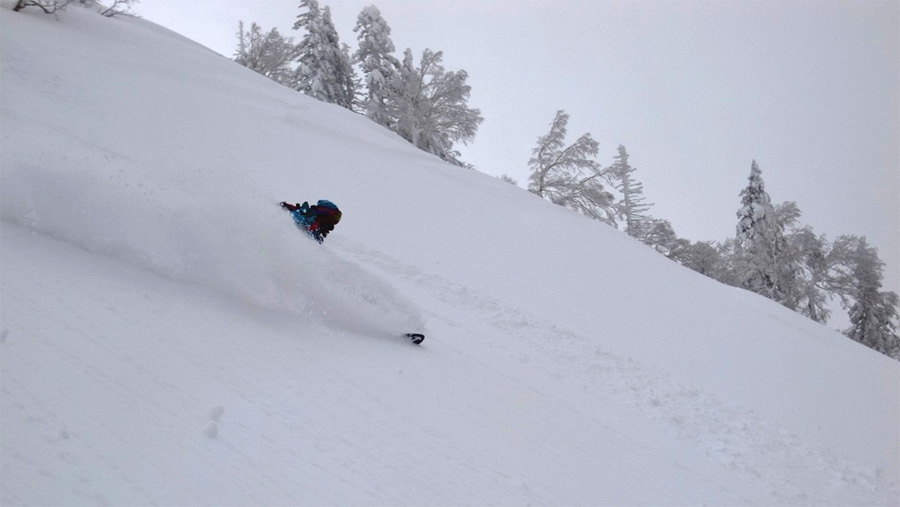 I put my hand up to buying two pairs of fat skis - 165 Armada VJJs at 115mm and 169 Nordica Santa Ana 110s, the latter for ski touring set up with Diamir Tecton bindings. Sidecountry,  slackcountry, backcountry, I'm happy so long as it's powder country (image, above, skiing down Mt Yotei, Japan). I may not be drawing a pension yet (thanks to the government continually and unconstitutionally moving retirement age for women - and that's another post for another website) but at age 64 I'm looking forward to, knees willing, another 35 years.

After all there are POWS in the USA going downhill literally rather than metaphorically, in their 90s and beyond. George Jedenoff (below) is 101 this year and still shredding although, as he admits, 'when I see powder again I get so excited  I quit breathing', not recommended at any age. But with the publicity he's created reaching the ripe old age of 100 years in 2017 he's probably done more for Rossignol than any of the brand's pro athletes. Actually what am I saying ripe old age? Make that ripping old age.

Ken, main image and below, is 62 years old, an off piste BOSS as in Badass Offpiste Senior Shredder, a Ski Club of Great Britain gold standard, on and offpiste and A grade leader, thanks to seven seasons spent in Zermatt and the knees of a 30 year old. He's now living in Serre Chevalier, semi-retired for the past two and a half years as in working the summers doing renovations and his winters skiing. How many powder skis does he own? He has to count, flipping fingers on two hands until he gets to seven. Yes, seven fat skis over 108mm wide at the waist. 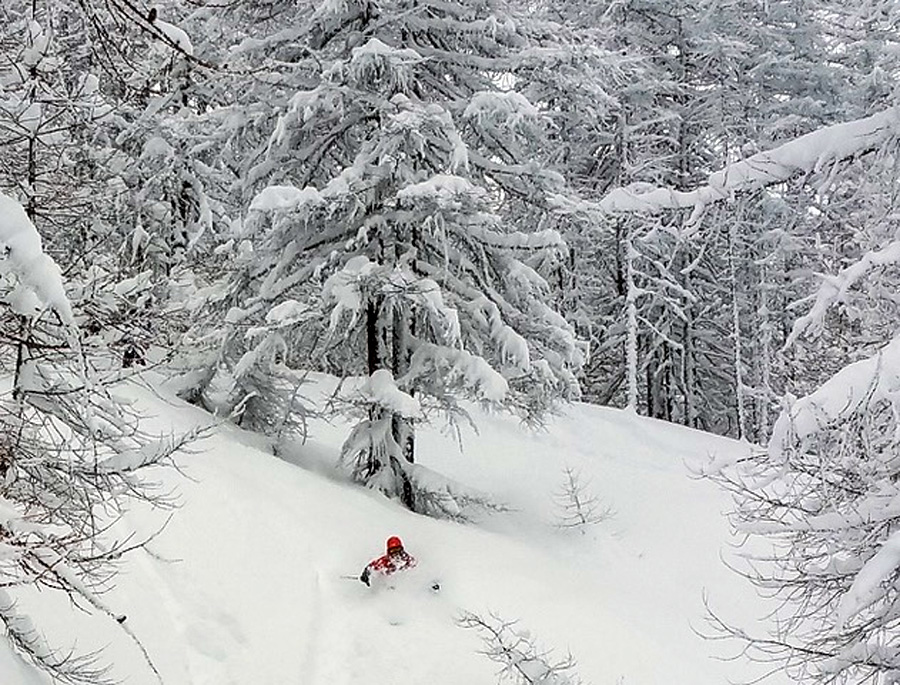 He has also encouraged fellow sexagenarians leading them into ski shops to buy fat skis and explore untracked mountainscapes like Hannibal on a mission to get to Italy over the Alps. Retired solicitor, Adrian, 69, loves his Rossignol Super 7s with 116mm waist so much that he bought his wife Rossignol Soul 7s, 106mm, for Christmas. Pat, 65, admits she was less thrilled and more 'terrified' by her present but soon found that not only do her new skis give her confidence off-piste but they are also surprisingly easy on the piste as well. Now, on a bluebird, you'll find them on first lifts and making first tracks in the pristine powder.

But they say you can't teach an old dog new tricks so how good are POWS in powder? Can an old dog become an agile powderhound? With fat skis the answer is yes, knees willing. For many over 60 their knees are more willing than able but, today, partial and full knee replacement ops are booming resulting in continued skiing into twilight-  and even midnight - years.

The other downside, literally, is falling over in deep snow - one of the 8 Fear Factors that hold you back skiing or snowboarding. If you can't get up from sitting on the floor without using your hands, then chances are you're not going to have the core or muscle strength to stand up after stacking it in a metre of powder. But this is a challenge if you're overweight and unfit at any age - and remember that many POWS are actually fitter than those in their 40s simply because they are Skeezers (see Snow Tribes) who have retired to become Geezonaires, doing whole winter seasons in the mountains out skiing all day instead of only one week's holiday a year.