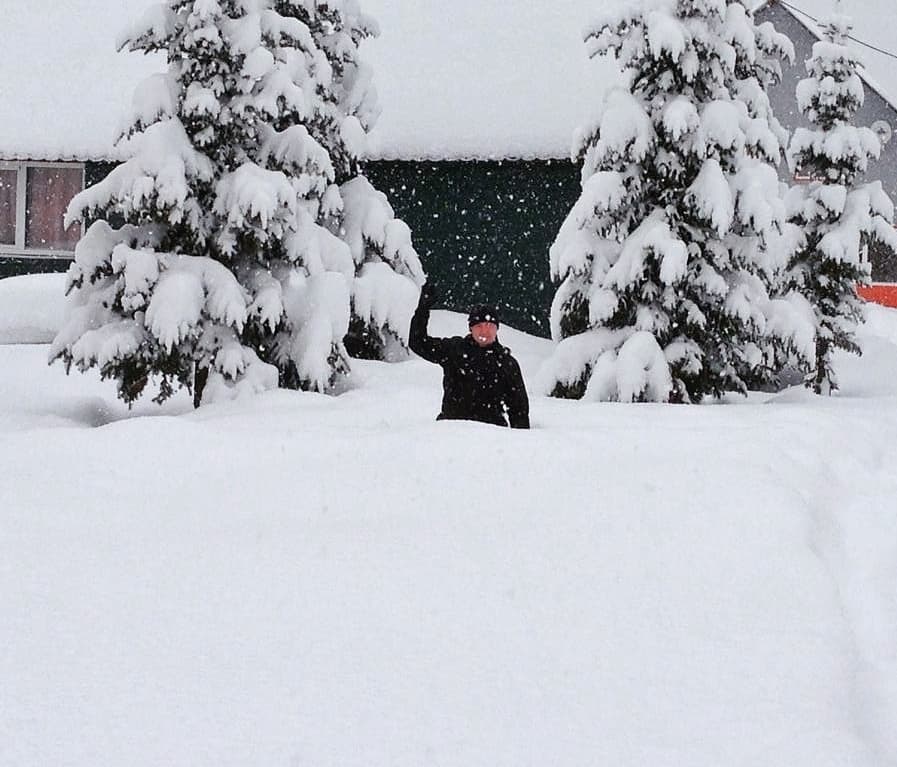 Background to the trip to Luzhba Skitour Lodge

So a bit of background first, if you want to jump straight the review click here.

Around six months ago my good friend Per As a mountain guide I first skied with back in 1997 in La Grave suggested this early season ski touring trip to Siberia.

Now this year alone in 2018 I have skied Japan, and skied with Per in the Queyras as well as a four week trip to Madagascar (not skiing but kiting) so was I being a little too greedy in going on this trip?

Maybe yes, but really it was too good to pass up, so I played my 60th Birthday Card (December 3rd) and also as a keen follower of Mahatma Gandhi's philosophy "Live as if you were to die tomorrow. Learn as if you were to live forever" and having lost two of my best mates this past year way too early why the feck not!

Preparation for the trip started a good six or seven weeks ago as it became clear that the process of obtaining a Visa for UK citizens visiting Russia was not a simple case of an online application but actually having to go personally to an office for the purpose of finger print / facial recognition as well as having to fill out a gargantuan form requiring such information as 'List the countries you have visited in the last ten years' as well as my deceased Father's various details!

There was, for me at least the added complication that I was travelling back to France so I needed my passport which you have to submit along with your Visa application. Also for the Visa application you need a 'letter of invitation' from whoever you are staying with in Russia, be it the Tour Operator or in our case 'Skiing in Russia Luzhba Skitouring Lodge'.

The actual letter of invitation came a little later than I expected so I had to 'Fast Track' my application as I needed my passport to travel. So up to London to the Visa offices armed with my 'letter of invitation', my printed out application form, all six or seven pages, recent identity photos and then having to pay nigh on £200 to get the Visa in five days!

Five days later I'm about to go up to London to collect the Visa when I see an email from Per about the trip and the dates he was referring to were not the same dates that I had and had used for my Visa application, ALARM BELLS rang!

After a few phone calls and emails between us it seemed that I was the only one out of our group of six who had been given duff information in my 'letter of invitation' so my Visa which I was about to shortly collect was useless!.

So more panic emails on my way to London, and to cut a long story short, I was able to get a new 'letter of invitation' this time with the correct dates emailed to me. Luckily I had a mate who works close by to the Visa office, so I was able to print out a new application form etc etc go to the Visa Office obtain my passport and then explain that it was all wrong and how I had to apply again, and you guessed it, fork out another £200 for the privilege, and another trip back to London to get the new visa!

You may well think that it was not my fault as I was initially given the wrong information in the first place, but unfortunately that's not how our hosts see it ?

I hope that over a few vodkas we can resolve this!

I stay pretty fit for a 'dude' of my years, though maybe could be fitter if I did not have such a penchant for red wine / cheese / meat but I've always said it's a bit of a dynamic equilibrium.

Thing is about this early season tour is that when we normally go on a ski touring trip which involves five or six days of continuous touring we're pretty ski fit before we travel, so really it's a bit of a reality check as that's how the vast majority of people are as they're not fortunate to be in the mountains nearly all the time!

When we first arrived in France middle of October it was still good weather for road cycling and I cycled all the nearby Cols for one last time before autumn was replaced by winter. At the same time I started running again, along with Elaine my wife, and that's been pretty tortuous, the running that is, and not helped by a calf muscle issue that I've had over the years. At least it's not too bad running up hill and down, it's just along the flat, which fortunately we don't have much of around here.

We actually ran up from the Col du Lautaret to the Col du Galibier just before the snow arrived at altitude, more on that here.

The snow line has been around 2,000m and pretty well for the last 10 days or so we've hardly seen the sun, that said we have been tempted to get the ski touring gear out and have actually done three mini sorties, though flat light and cloud have prematurely curtailed the last two. 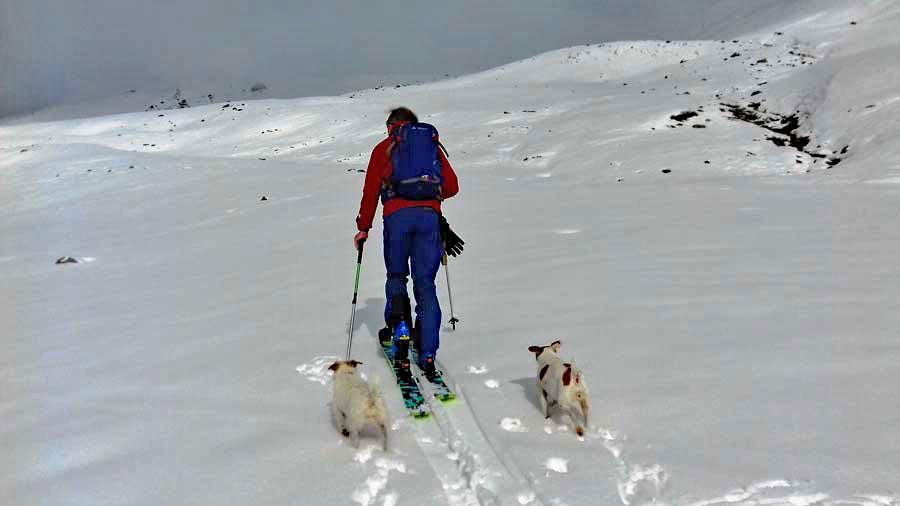 I was hoping to maybe get some blisters in advance of Siberia which I could then treat and toughen up (see here for more advice about how to treat blisters) but just have not been able to get one.

One good thing is that our ski touring sorties have been well above 2,300m as well as cycling so that should help as the Luzhba Skitouring Lodge is at just under 400m and I think most of the climbs are in the region of the 750m or less.

So with the running and cycling hopefully I'll be ok, will just be the jinx of the blisters that might get me!

Ski touring decisions - what to take

I'm pretty experienced in what to take ski touring, though I'm not too experienced as to what to pack when flying, and this is compounded by being advised to pack your ski boots and some gear in your hand baggage as over the course of two flights, first to Moscow and then overnight to Abaka, there is a chance of baggage going missing!

Plus we need to be dressed to cope with daytime temperatures that are circa minus 20 when we arrive, as per our brief itinerary for travelling from Abakan to Luzhba:

On Saturday, on arrival at Abakan airport after the overnight flight. At 10:30, you will leave the restaurant and then ride to Biskamzha train station, for 2.5 hours. There you will be met by our staff from the lodge, who will help with suburban train and rest of logistic. The train to Luzhba departs at 13:56 local time and arrives to Luzhba station at 15:30. At Luzhba train station, all your luggage will be carried by snowmobile to the lodge, while we walk there (20 minutes.). Please, be properly dressed for the walking in the snow (high snow shoes!) and for low temperatures.

As for clothing I hope to be travelling light, as I'm sort of basing clothing on our experiences in Japan where we did have a couple of days of nigh on minus 20 when ski touring, plus we're not exactly going to be going out to bars and restaurants!

This is what Luzhba Ski Touring Lodge advise:

It's mainly the hardware side of things that's causing and consternation, and the all important question.....

What skis to take

For me the Atris was pretty well my go anywhere ski last season, especially good in the trees (and there a lot of trees in Luzhba). In fact they are so good that at the end of the season I bought another pair, and it's amazing the deal you can get on the very last day of the season (after they've been in the window nigh on all winter) when you walk in with cash :)

However just to make the decision even harder the Lodge mentions that skins and glue should be in good condition and tail clips strongly recommended.

Issue for me is that the skins I use with my Black Crows do not have tail clips, however again I have never had an issue with them in cold deep powder. Then Per, our guide, suggested taking a spare set of skins as we may well be doing more than a couple or ascents a day and that is when you can encounter problems, and he just happened to have a spare set that fits the Black Crows, so decision made!

I do like my tech and I'm in danger of going overboard on this trip!

First out of the gates is my Garmin Mini InReach (more on that here) and details of all our tracks and routes once we're out there can be found here , and to see exactly where Luzhba Skitouring Lodge actually is click on Waypoints in the left hand column and then 'Luzhba Lodge' and you can zoom in to satellite level.

I'm still not too sure if I'll take my DJI Spark Drone, as that is a lot of kit and a lot of faffing, but there again due to the uniqueness of the location even footage of the lodge and surrounding area could be pretty cool. To fly the drone I need my Ipad Mini as well!

Then there's the LapTop, chargers etc etc and even a camera!

In addition to the tech, all the usual gear for low altitude ski touring, transceiver, shovel and probes, and then head torch & spare batteries for the hut, thermos and water bottle and of course duct tape on poles, mini leather man, Compeed & needle (see why here) and last but not least ear plugs!

So if you've read all this you might want to know what the actual trip was like?

Read about that here