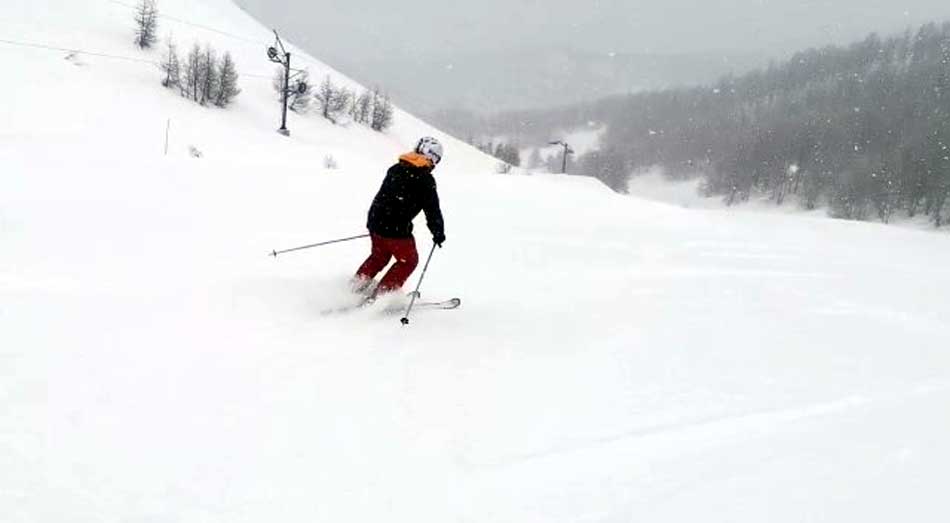 To Ski or Not To Ski That Is The Question

So how was our backcountry snowboarder after 5 days learning to ski? On the final day how did he cope skiing in a white out? And what is his decision for the future. To ski or not to ski, that is the question...

My last day in Serre Chevalier on the slopes was Friday and a ski with my hosts, Elaine and Gavin.

There were light snow flurries developing into a steady snowfall covering the pistes with 2-3cm of fresh fluffy snow thanks to the low temperatures and lack of skiers on the pistes.

Needless to say snowfall presents another challenge, poor visibility which makes the terrain hard to read and leads to a tendency to tense up, exactly the opposite to what really works best, relaxing and letting your legs absorb the lumps and bumps. This may sound a bit presumptive on the part of a 'five day old' skier, but years of snowboarding meant these conditions were nothing new to endure.

Skiing with Gavin and Elaine and some of their friends. Sticking with a group of skiers meant that doing the simple drills which Darren Turner had so clearly articulated was another challenge, but when the opportunity arose, I squeezed in what practice I could.

Eventually, the weather got the better of the group and left just Gavin and me to enjoy the empty pistes and talk about practising the edge pressure exercises that Darren had taught me.

A couple of final hours really helped my skiing especially with some fresh snow cover on the piste.

So there it is, Project Learn to Ski, not completed as planned but started. By 'started' I don't mean to suggest it has been anything other than a great success. If you'd have asked me what would have been an acceptable outcome of the week, I would have settled for far less!

I think what really helped me was NOT having been on skis for over three decades. I know this gave Darren a blank canvas. Darren talked to me about this several times and how it made things easier. So if like me, you've snowboarded for years but are thinking, maybe I should try skiing before I get too old to learn and have to give up snow sports altogether, I recommend what I have been through.

What next from here? Well having got this far, I am not giving up skiing, neither am I giving up snowboarding, I have a touring trip to Svalbard booked for late spring. My new Jones Solution Spilt-Board will be making the trip. But this time, on the flats, maybe I can get a bit closer to the skiers in the group?

To do  a trip like this costs a lot, by which I mean going on holiday to the Alps for a week as a beginner when I know I have the skills to ride all the pistes from day one on a snowboard! I could have joined Gavin and Elaine on their backcountry tours with my splitboard on a couple of the days, instead, I went off to skiing lessons.

I think I will book a similar trip next year and more time with Darren Turner learning more skiing skills. The point of all of this to me is that it would be a wasted exercise  if I stopped here. Ultimately, I want to be as comfortable in the backcountry on skis as I am on a snowboard.

And then there's the final dilemma ,kit. Do I go and buy some boots and skis? Maybe just boots, becausethe hire shop ones were just OKish. And so it goes on.

A final 'thank you' again to my generous hosts, Elaine and Gavin at stylealtitude.com

Editor's Note: On Jes's fifth day of skiing he easily kept up with the group and had more confidence at speed in low vis than some others, going to show that years of snowboarding definitely give him the edge. And now he has two, edges, that is.

If you've been affected by this ski blog, seek further help and read:

OFF THE HILL GRANDPA! (OR GRANDMA). CAN YOU BE TOO OLD TO SNOWBOARD?