Will they only have themselves to blame when restrictions are brought in? 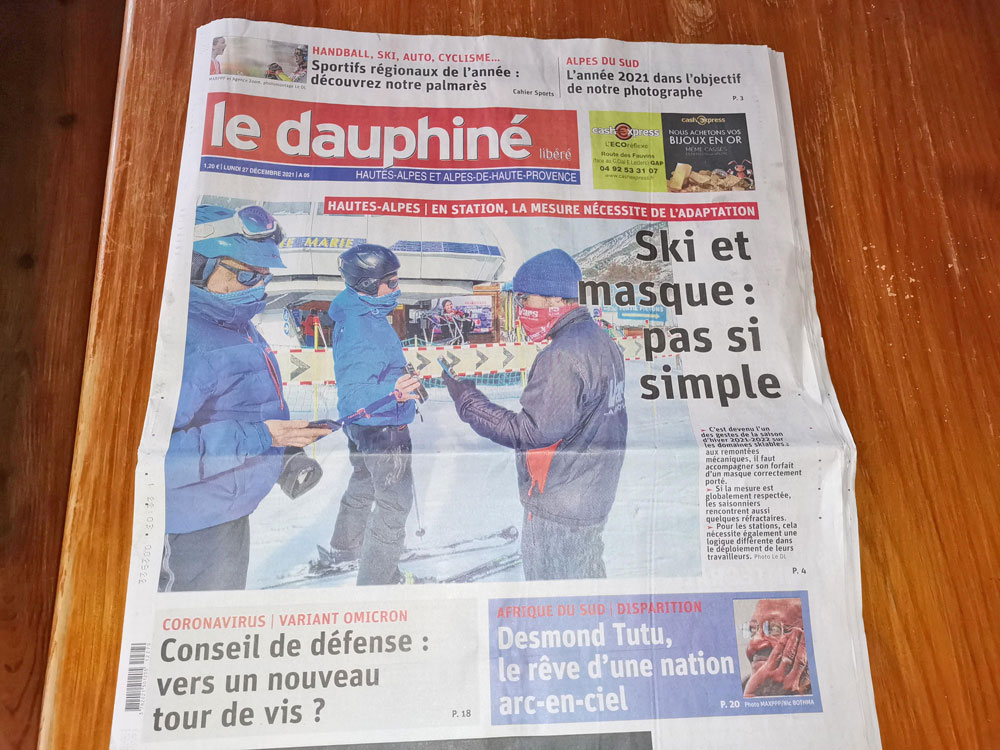 Since the start of the season we have only been using chairlifts. As the resort was quiet, mask wearing was not that obvious. But now the French are here en masse for the New Year and it's massively clear that covering up with a mask is not that obligtaire, which is a tad ironic as the Brits have been banned to prevent the spread of infections...

OK, first off it was lunch time, the reason I was going up the mountain in one of the busiest weeks of the year, opting to use the Pointillas gondola near to us, as there would be no hassle with parking.

We refer to Pointillas as Pointless as once you take it you still have to ski back down to the valley to go up the Casse du Boeuf chairlift since another chair linking from it was taken out of service as part of a huge modernisation plan to replace the lift, then the pandemic struck.

Now the lift is the mainstay for the 1,200 clients of Club Med close by to get up the mountain.

I thought my timing was perfect and then I saw people disgorging from Club Med skiing down to Pointless so by the time I walked up the steps there were a good twenty or so people in front of me. Then it dawned on me, very few of us were actually wearing masks!

There are so many signs around informing that 'le port du masque est obligatoire sur les remontées et dans les files d’attente'. All skiers are, also,  very much be aware that there could well be checks for the pass sanitaire.

Now even if the people doing the checks for the pass sanitaire were at lunch that did not explain the total disregard people had for wearing masks in the gondola, OK I get it that chairlifts are sort of exempt because of the fresh air, but a gondola! 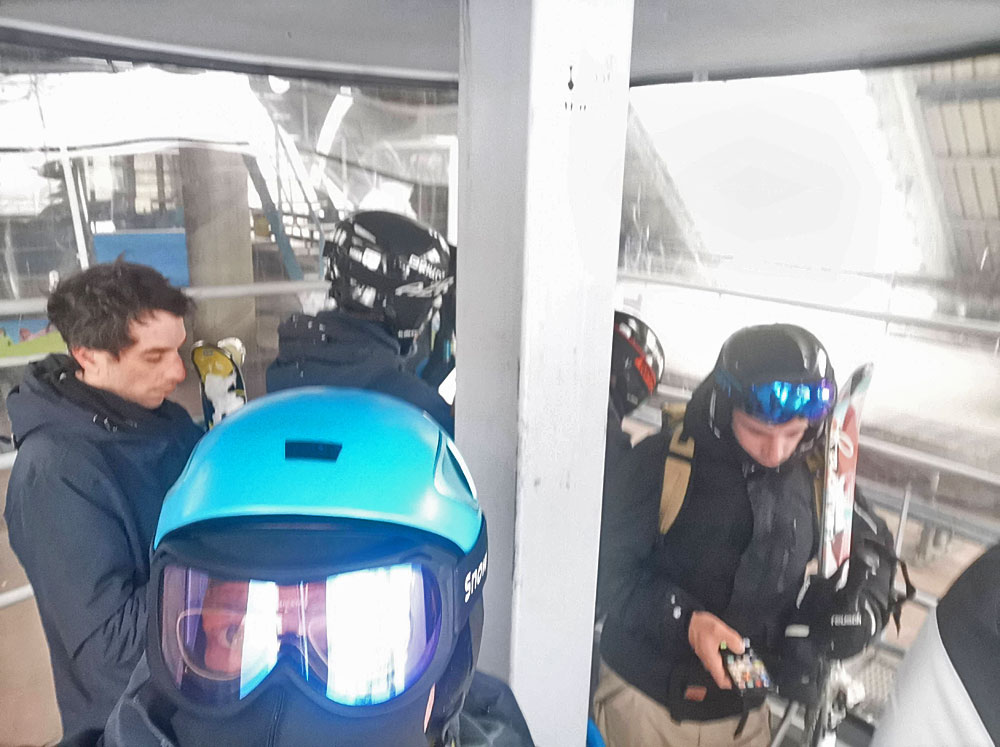 Though it was a tad ironic that people were politely waiting for the next gondola rather than cramming into each one, and maybe they thought that was enough then to not wear a mask?

When I skied back down into the valley to the Casse du Boeuf chairlift, as I expected most people had no actual masks on or had merely pulled up their Buff/scarf.

Then when I was in the Bivouac restaurant, I saw the front page of Le Dauphiné (image above) and did think from the headline that the article would be about how hard it was to enforce the wearing of masks.

But it was far from it, in fact, it was a classic piece of French bravado/back-slapping about how wondrous everything was going with regard to people obeying the rules! 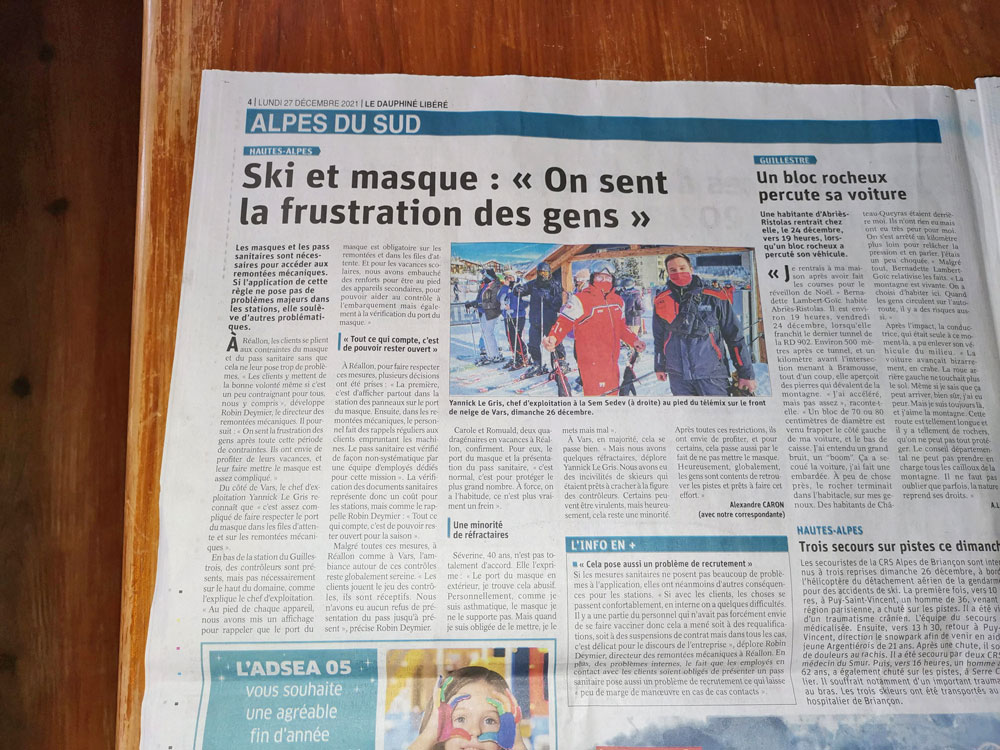 *Google translation at the end of the blog.

So maybe I just was unlucky, and it was a one-off, but I very much felt that these high season tourists had absolutely no intention of wearing masks. I hate to imagine what conditions are like in Club Med, which must be a massive petri dish.

By this time next week, we'll probably be reading about a record number of cases in France, and how maybe further restrictions in ski resorts will be necessary.

The funny thing is there is a massive sense of deja vu as the influx of high season tourists last year caused the same questions to be asked!

We had about 10cms of fresh this morning before the heavy rain that is due, even at altitude later!

Mate and I agreed to meet at 08:55 in time for first lifts, and a first for me in that I was late due to trying to find a parking place, it was so mobbed.

That said we were pretty well the first up deciding to take the vintage 4 or is it 6 person bubble from Frejus?

And quelle surprise, nigh on all the people behind us were not wearing a mask, so my mate just pointed out that we split our skis and put single skis in the bins.

*Ski and mask: "We can feel people's frustration"

Masks and pass sanitaire are required to access the ski lifts. While the application of this rule does not pose major problems at stations, it does raise other issues.

In Réallon, customers comply with the constraints of the mask and the health pass without this causing them too many problems. "Customers are willing to do it, even if it is a bit restrictive for everyone, including us," says Robin Deymier, director of ski lifts. He continues: “You can feel the frustration of people after all this period of constraints. They want to enjoy their vacation, and getting them to put on the mask is quite complicated. "

On the Vars side, operations manager Yannick Le Gris admits that "it is quite complicated to enforce the wearing of a mask in the queues and on the ski lifts".

At the bottom of the Guillestrois station, controllers are present, but not necessarily at the top of the domain, as the operations manager explains. “At the foot of each device, we have put up a display to remind people that wearing a mask is mandatory on the lifts and in the queues. And for the school holidays, we hired reinforcements to be at the foot of the secondary devices, to be able to help with the control on boarding but also with the verification of the wearing of the mask. "

Despite all these measures, in Réallon as in Vars, the atmosphere around these controls remains generally calm. “Customers play the checks game, they are receptive. We have not had any refusal to show the pass so far, "says Robin Deymier.

Carole and Romuald, two forties on vacation in Réallon, confirm. For them, wearing a mask and showing the health pass, "it's normal, it's to protect as many people as possible. By force, we get used to it, it is no longer really a brake ".

A minority of refractories
Séverine, 40, doesn't totally agree. She says: “Wearing a mask outdoors, I find that abusive. Personally, as I have asthma, I can't stand the mask. But when I have to put it on, I put it on but badly ”.

In Vars, for the most part, things are going well. “But we have a few refractories, deplores Yannick Le Gris. We had rudeness from skiers who were ready to spit in the faces of the controllers. Some can be scathing, but luckily that's still a minority. After all these restrictions, they want to take advantage, and for some, that also means not putting on the mask. Fortunately, on the whole, people are happy to be back on track and ready to make the effort. "

"This also poses a recruitment problem"
While sanitary measures do not pose many problems for enforcement, they nevertheless have other consequences for stations. “If things are going comfortably with customers, internally we have some difficulties. There is a part of the staff who did not necessarily want to be vaccinated so this led either to requalifications or to contract suspensions but in any case, it is delicate for the speech of the company », Deplores Robin Deymier, director of ski lifts in Réallon. In addition, internal problems, the fact that employees in contact with customers are obliged to present a health pass also poses a recruitment problem, which leaves "little room for manoeuvre in case of contact".