The Pow Rush. Time To Get Out of Dodge / Niseko 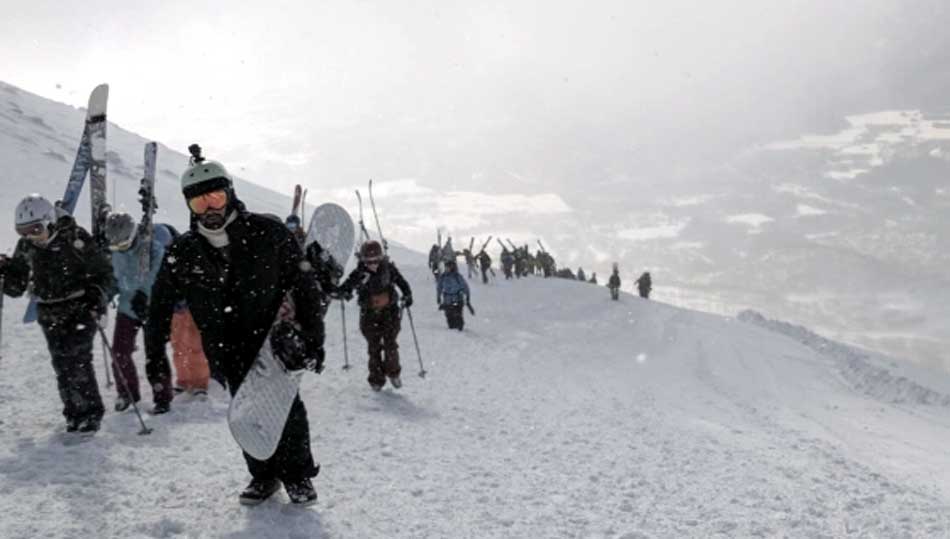 IS NISEKO LOSING IT'S POW OF ATTRACTION?

With more and more freeriders, ever steeper prices and alarmingly less snow in Niseko, it's time to go elsewhere for first tracks and authentic Japanese culture.

It was the Gold Rush that made them swarm west to California in 1848. Now it's not gold nuggets but white powder that's drawing hordes of Americans to the east. Niseko, it seems, is currently at the height of the Pow Rush.

And it's all thanks not only to Niseko's reputation as the mecca of blower Japow but, more recently, to the Ikon ski pass, which now offers holders seven free days all-mountain skiing in Niseko. So while we can't blame the many Americans with Ikon passes taking advantage of prospecting Japanese white gold, it is time to get out of Dodge. 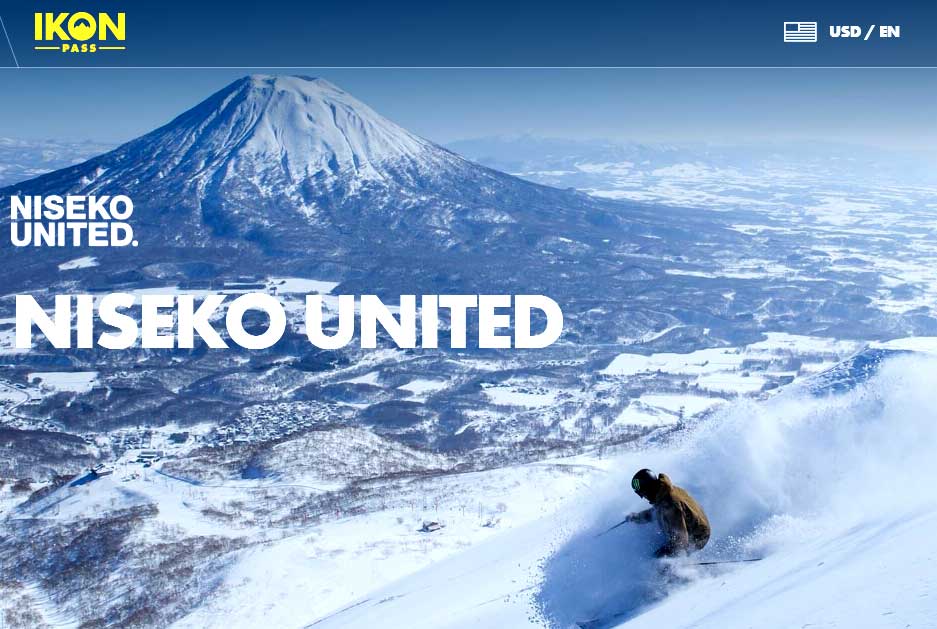 After two years since we first stayed in Niseko, we were choking on the price increases like mistaking wasabi for mayonnaise. A glass of beer costs around €8 at apres in most bars in town.

Although in February, this year, the Chinese were notable by their absence (and face masks), there are still plenty of Australians who have also helped the economy - and the hike in prices. And now Finnair is flying direct to Sapporo from Helsinki (so a direct flight rather than via Tokyo), even more are flooding in from Scandinavia and Europe. And, let's face it, if you're from Norway €8 for a beer is actually a bargain.

Up the hill, when there's fresh pow and the top gates open it's like a freerider shark feeding frenzy. If there is fresh snow, that is. The 2019-2020 famous Japow was way off it's usual head-high mark. Like when the gold ran out in California, a significant reduction in snow will be another reason for Niseko losing its pow of attraction. If it's global warming then ironically the Japanese only have themselves to blame, wasting energy heating their streets and toilet seats.

But what's possibly the most off-putting for backcountry purists is that Niseko is actively promoting snow-mobiling as an alternative 'adrenaline rush' to skiing or snowboarding in the powder. In Niseko at least three companies are offering snow-mobiling; it's even on the cover of the magazine, Niseko.com with a feature inside declaring 'snow mobiling, the next level of Japow'. 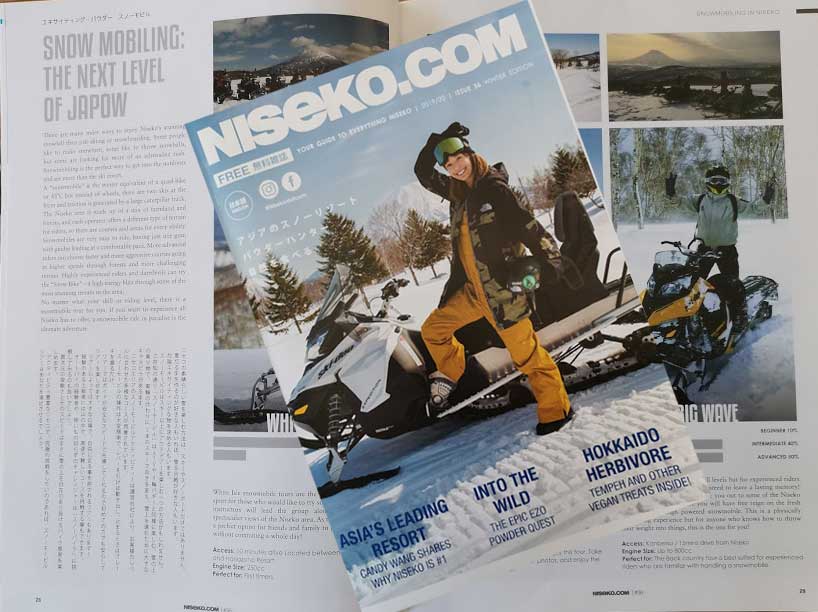 Want your tranquil ski tour out in the backcountry disturbed by the roar of engines gunning up the hill? Nope, thought not. This actually happened on our ski tour, below, off the back at Kokusai. 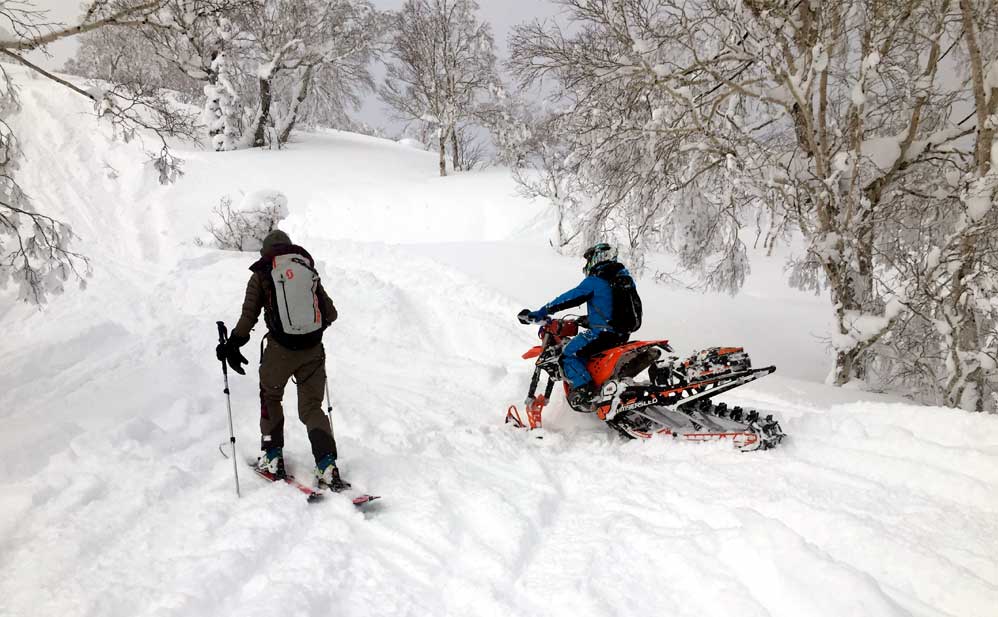 In 2018, we bought a one-day ski pass at the beginning of our 10 day visit to Niseko - and that was it. Skiing the Niseko main resort just once was enough. Although it was snowing continually all day and night, it wasn't filling in the tracks continually made by the marauding mob on the slopes, between the trees in the sidecountry and through the gates in the backcountry. It was time to book a guide and get out of resort.

Two years later and we were back but this time for an eight day ski tour trip customised by Sherpas Ride, a local freeride guiding company as chilled as a Sapporo beer with great energy and enthusiasm for chasing powder. We stayed about a kilometre outside Niseko resort and only visited to go back to a couple of bars we enjoyed last time such as the famous Fridge Door bar (Bar Gyu). But even here, there were queues outside waiting to be let in when there was a free table like it was Studio 54 in the 70s.

So we ski toured in small resorts with only a few lifts to access the backcountry or used skins for touring finishing at around 3pm for a late lunch / early apres at small out-of-town Japanese restaurants mainly in nearby Kutchan thanks to our guide's local knowledge, inhaling large bowls of ramen noodles for €7 and a large bottle of beer for €4.

In fact Kutchan if you believe the property developers could be the "Future of Niseko" but at the end of the day there has to be a saturation point up on the hill, according to locals who have seen both prices and crowds increase over the past few years.

And after five days we got out of Dodge and moved on to the far less frenetic Furano. To those still skiing / snowboarding Niseko we say, 'Sayōnara suckers'...