At Oakley in Covent Garden, London, our Founding Editor, Loulou Baylis, sat down with one of the most gifted backcountry riders in snowboarding, Jake Blauvelt, as he was promoting his new movie: Naturally. Over coconut water (very natural) they discussed shoulder injuries, using the mountains for creativity and how snowboarders today need to strip back and just ride… naturally.

Jake has spent the last two years filming Naturally, a movie that focuses on the back to basics essentials of snowboarding, fun, fresh powder and shredding with your best mates, instead of the big air and aerial tricks of contemporary snowboard videos This 27 year old freerider ditched the rails and kickers for the mountains' natural architecture. 'We wanted to shoot mainly off piste powder on natural terrain. I think that a lot of snowboard movies, these days, are where you build a jump for two hours and then you just hit the jump doing a bunch of tricks. Our goal for the film was to ride natural terrain, as the mountains give it to us. We just work with the mountains.'

Eric Jackson, Shayne Pospisil, Kazu Kokubo, and Freddi Kalbermatten all feature in the film and there's a creative and free attitude. It's a pure joy of riding natural features with your best mates that helped to make one of Jake’s favourite scenes in the film:

‘We were in interior British Columbia, a super deep powder day and I was riding with one of my best childhood friends. We got this one double line where it was almost like a natural halfpipe. He’s up on top and he sprays a bunch of snow into the bottom of the halfpipe. And I go through the spray, kinda like a wave. It’s a really cool and unique shot. It’s so awesome that it’s with one of my best friends from my childhood’.

Most of Naturally is filmed in the backcountry of British Columbia, but the crew also went to Japan, France and Riksgransen in Sweden. ‘Whenever we were healthy and there was good snow in the world then we’d go. We’d try to keep an open schedule’.

However, it wasn’t all good health and plain riding with Jake injuring himself pretty badly in the first year of filming: ‘The first year was a little tough. We started filming in December and I dislocated my shoulder in February. I tore the labrum, the innermost seal, and the seal is kind of like an ACL that just doesn’t heal on its own. I had to go straight in for surgery and so it was only three months [of filming] and then I had nine months of rest after that. It’s a really long recovery. For six months I couldn’t lift anything heavy. It was tragic, I just had to keep sane’.

Yet, Jake believes that it’s part of the process to fall and get hurt. Naturally is full of insane stacks and bails: ‘I think it’s good to show wipeouts. That’s all part of it. And if you’re not taking those falls, not getting hurt every once in a while then it’s like you’re not pushing it hard enough’. For Jake, falling is part of the style of progression: ‘If you really want to go to that next level then you need to take those falls. You don’t have to take those falls if you don’t want to progress, you know, but in order to progress, you have to fall. You have to get hurt once in a while. If you’re not falling, you’re not doing it right’.

Recklessness though is not Jake’s style, particularly when he has to be so calculated in choosing his best line: ‘I don’t like to think of myself as a stunt man or a daredevil. It’s more artistic. I like to be creative with the mountains and snowboarding. Not risking it’. 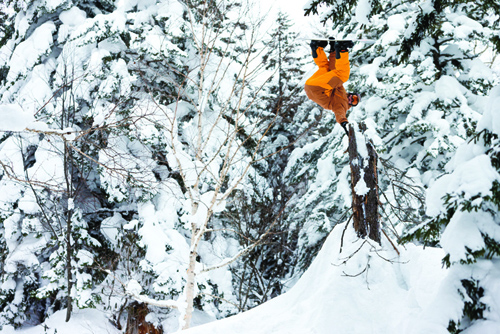 'Snowboarding to me is more about creativity, adventure and exploration'.

It’s this desire to be creative with what the mountains provide that is behind Naturally, and what pushes Jake as an athlete. In 2004, when Jake was 17, he won the US Open and consequently the road of competitions, slopestyle and halfpipes beckoned. Yet, why choose a man-made halfpipe when you can ride a natural one with your best friend? Jake chose the natural path rather than the constructed road: ‘Competitions are not my style really. It’s not that I’m not a competitive person, because I am. I am very competitive. But, snowboarding to me is more about creativity, adventure and exploration. For me, it’s not about going off a jump. It’s not about seeing how big or high you can go and how many times you can spin to impress judges. I try and do it for myself. And be creative’.

Creativity endlessly flows from Jake and the crew throughout Naturally. There's no farce, just naturalness. Yet, 10 years on from when Jake won the US Open, all eyes are on the 2014 Winter Olympics in Sochi and particularly the introduction of slopestyle as an event. Does Jake have any desire to be a part of it? ‘Maybe, if I really wanted to focus on it. But, I don’t think that judges reward creativity. It’s too hard to judge creativity. It’s easier to judge when someone has done a 1080 or 1260, you know? So that’s kinda why I don’t like doing contests so much’.

The competitions began calling, but it was the recognition from winning the US Open that allowed Jake to choose a different path.‘I wasn’t having so much fun with contests. I was starting to enjoy powder more. Being in the backcountry and being more creative. It was the US Open that kind of allowed me to get with a film crew, allowed my sponsors to believe in me and let me go on my own path. That was the tipping point, after the US Open. I made my name for myself through contests, and then I was allowed to do what I really wanted to do’.

'[Professional snowboarders] can do amazing tricks, but they can’t turn for shit’.

Jake hopes that Naturally will make aspiring riders realise that there’s fun to be had in what the mountains present naturally, rather than spending hours constructing massive cheese wedges: 'The main goal of the movie is to show what snowboarding is about: it’s about fun. It’s not about going huge or risking it all. Kids will hopefully realise that they want to turn their boards more. It’s funny, snowboarding’s oldest trick is the turn, but not many professional snowboarders these days actually turn their board. They can do amazing tricks, but they can’t turn for shit’.

In fact, maybe Jake can instil the need to turn on the kids themselves as he is setting up a new foundation with his fiancé: The Mountain Light Project. It’s aimed at kids who don’t get to experience the mountain lifestyle and surroundings in their daily lives.  ‘We are really excited to try and give back to the industry that’s given me so much. It provides funding for kids and young adults to participate in mountain based education programmes. Whether that means going to a camp or a snowboard club. It’s providing funding for kids to take it to that next level, who wouldn’t otherwise have the opportunity’.

Jake has also been designing his Pro Rider series for Oakley over the past three years: ‘Every year the product gets better and better’. This season, they’ve created a new technology called Oakley BioZone, which optimizes three types of anatomical zones according to specific physical needs. As Jake explains,‘It’s basically insulation where you need it. It’s all Gore-tex on the outside, but from within it’s insulated where you need it, like around the kidneys, on your butt, on your knees. That’s what I’m wearing in the film’.

So, from using a bit of technology to keep our natural frames insulated, Jake Blauvelt is showing us how to shred as nature intended, and have a hell of a lot of fun while we do. We can all take a lesson from Jake Blauvelt, who looks like he’ll be riding backcountry and having fun until his teeth fall out. Naturally.