How to prevent and or treat a blister 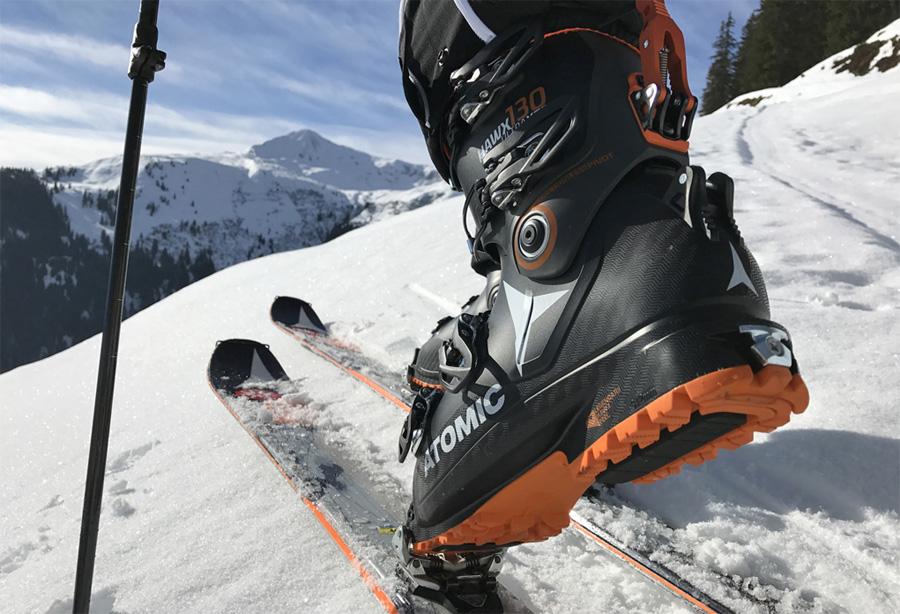 What can turn into your worst nightmare and ruin your ski trip? The blister!

Without listening to your feet and ignoring the tell tale signs of a blister rather than sitting down and dealing with it, the boot blister can result in a nasty wound or worse still an infected foot. Gavin Baylis gets out the needle...

Over thirty five or so years I have had some truly horrible blisters from walking both in snow board boots and ski boots, I've bought the most expensive guaranteed blister proof socks on the market and spent a small fortune on Compeed's and still end up with nigh on holes in my feet from red raw and painful blisters.

In March 2017 I ended up in emergency in Briancon hospital with an infected foot, although it was not a blister infection but an infected ankle bursa the Doctors said another day without anti biotics that there was a high probability I could have lost my foot or worse due to sepsis blood infection taking hold.

A simple blister untreated can quickly manifest itself into something like the image below in just a few days! 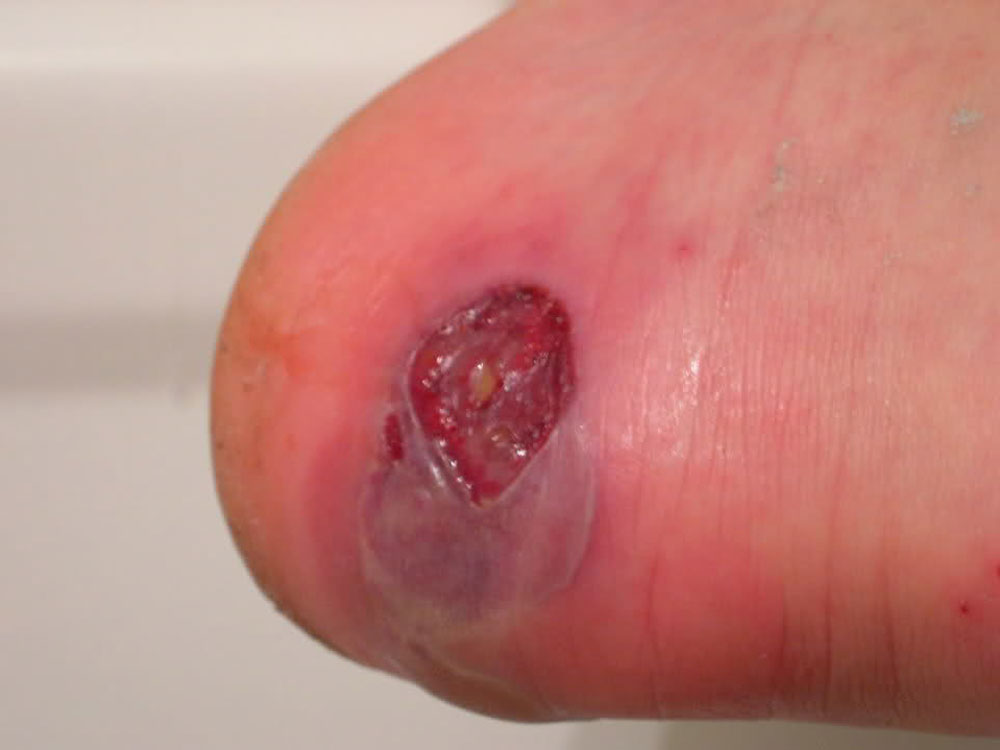 However there is a way to treat them if caught early before they burst.

Obviously the most common way to get a blister from your boots is from walking in them for longer period of time and that  ticks the box when ski touring be it with skis or a snowboard.

However I do suffer from soft feet as I use to get them when running and almost used to dread getting new running shoes and the subsequent blisters that would appear.

I Googled ways to prevent getting blisters, using Witch Hazel / Surgical White spirit to harden my feet and 1,000 mile socks as well as using silk liner socks and woollen walking socks, but they still came!

Even before the ski season started I used to walk the dogs bare foot along the promenade as well as hike on the South Downs in my ski touring boots in an attempt to harden my feet or get a blister in advance of a ski trip so by the time I went skiing I'd have a good callous of hardened ski scar tissue which is still the best way to prevent blisters.

Over the last five years of spending Winter seasons out in the mountains I usually get blisters at the beginning of the season and all is then well ski touring from Jan to March in cooler temps, however when ski touring in classic Spring Touring conditions so as my feet sweated so the blister problem would resurface!

Before you read on, I'd like to give credit to the person who advised me about this, after I'd run a X-Country Half Marathon over the South Downs a good few years ago  I commented on my Weather Blog that I'd sustained some bad blisters and fellow KiteSurfer Judy Tonkinson messaged me about this way to treat blisters, so thanks again Judy!

HOW & WHEN TO TREAT THE BLISTERS?
I had already knocked up four early season ski tours with just one tiny hot spot from the first tour and then the others tours I had no problems and I was feeling fairly confident that my feet were ok.

I then decided to go out for a training climb, just me and at a much faster pace than the previous tours, climbing the closed but groomed pistes in front of where we live which are quite steep in places.

And after about 90 mins I knew that I had a blister coming on each foot!

I carried on for another 30mins or so to where I was aiming for.

However, what if I was with a group of other skiers and we still had another couple of hours to go, what to do then?
The trick is to recognise when best to stop and treat them.

First tell / insist to your friends that you have to stop, DO NOT bravely persevere in silence especially if it's the first day of a multi day trip!

And more usually than not people like a break.

Probably if you're reading this then you're too prone to blisters and will be carrying the likes of Compeed, but maybe not the all important piece of equipment, the Needle.

For sure dealing with the blister(s) is far easier back where you are staying than on the Mountain, but you have to make sure that you treat the blister before it bursts.

Once the blister bursts then that's when the problems start as it's far more difficult to treat, especially if you have consecutive days of having to walk ahead of you.

A burst blister can rapidly go from a very sore one Euro sized  red raw skin to a far more serious open wound that could become infected.

The following pictures below show how to treat the blister.

If on the hill then be sure to take your time, make sure your feet are bone dry and not at all sweaty, as once you've treated your feet  you'll have to apply a Compeed or some type of dressing. 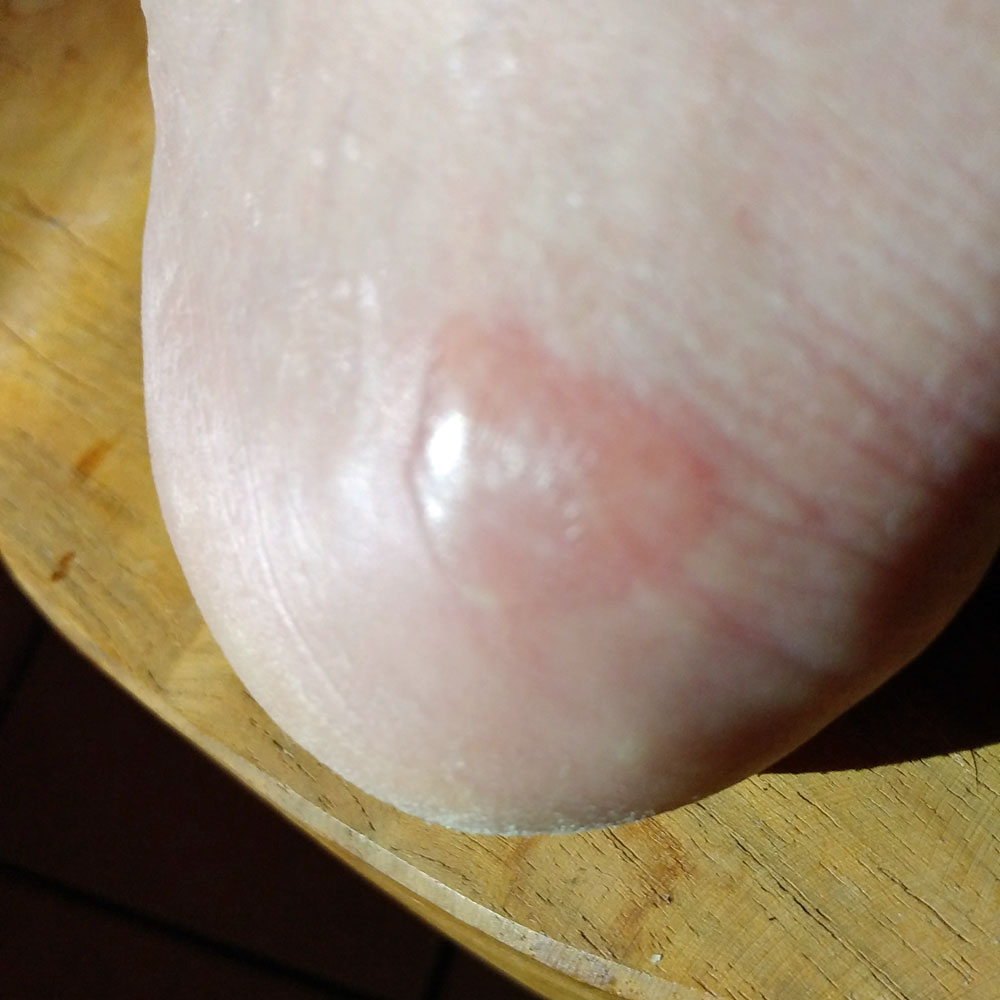 So carefully insert a sterilised needle 3-4mm into the good skin and then push the needle into the bubble.
It's a little difficult to see in this photo the exact insertion point as it looks like I've gone straight into the bubble. 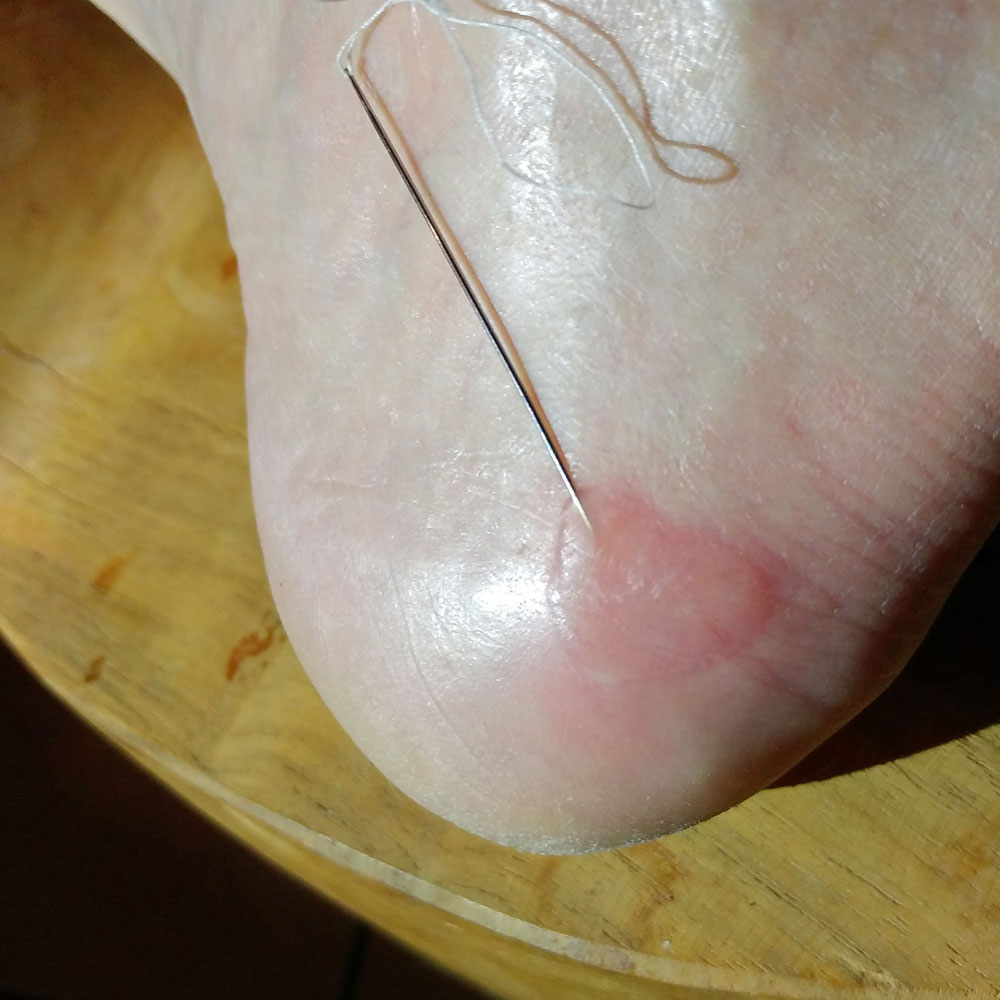 And then withdraw the needle and the fluid will escape and you can clearly see now where I inserted the needle into the good skin. 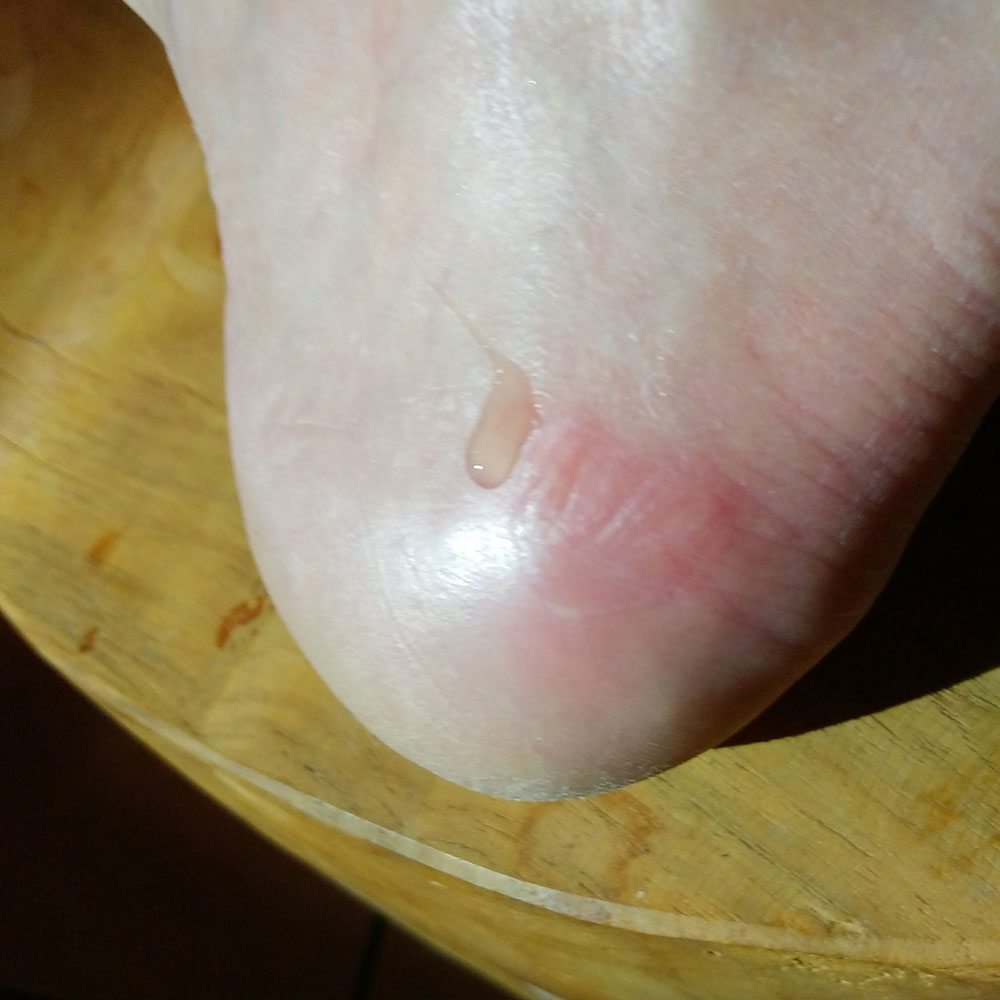 Then squeeze out all the fluid, if the blister is quite large you may well have to repeat the process the next morning but as you can see the skin quickly settles down. 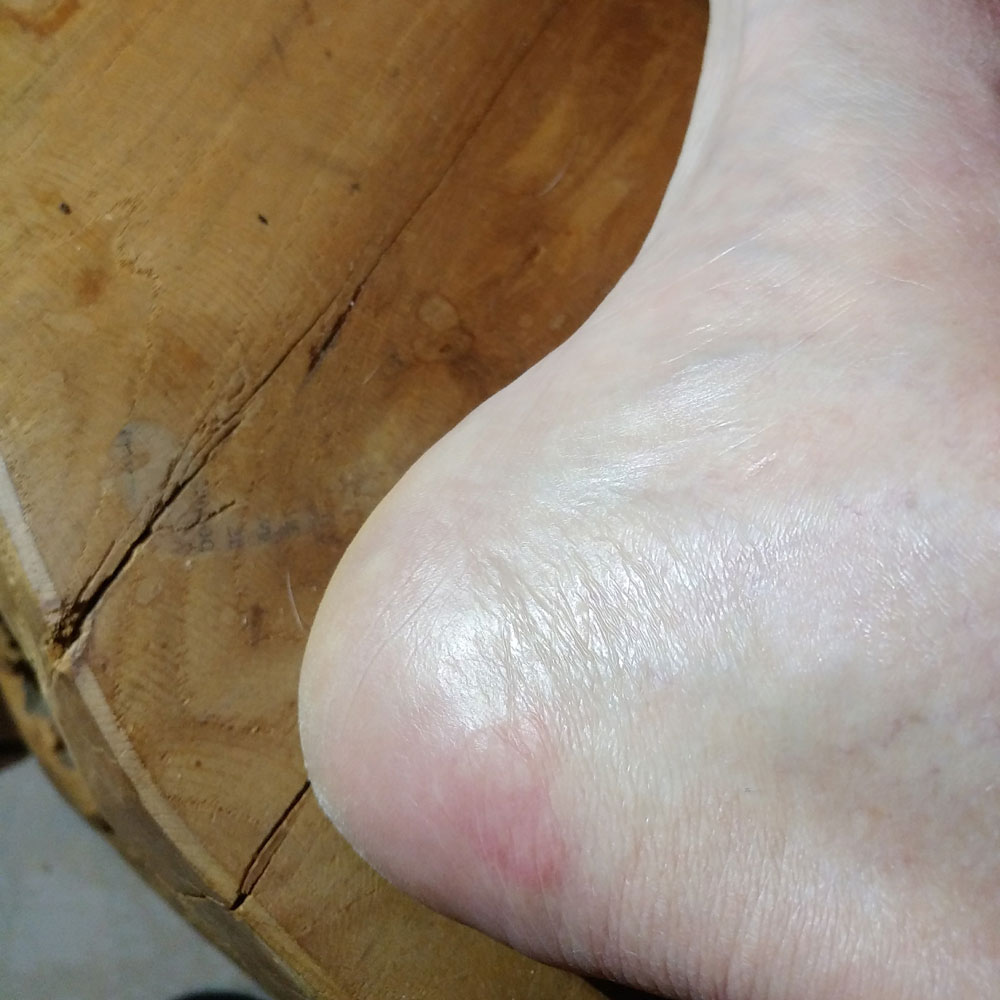 The skin will quickly heal over the blister where the bubble of fluid was, and I presume it's that together with no open wound that stops the blister from becoming red raw and at worst infected.

If on the mountain and you're treating the blister and you still have to carry on then really you have no option to apply a Compeed. Make sure that you do not stick the adheesive part of the Compeed to the skin of the blister.

And a word of advice about Compeeds. As I already mentioned make sure you're feet are really dry, if at all damp the Compeed will not stick and come off after half an hour. It really is worth spending some time applying it well.

Once the Compeed has bonded to your skin then it should be good for at least four to five days.

DO NOT PANIC when after a few days the Compeed goes white and you suspect you have a massive puss bomb* brewing below it, as that's what happens with the healing process. Also it does help not to get it wet when showering and at night it's worth sleeping with a sock on so as you turn over the edges of the Compeed do not catch.

*Though if the whole area inflamed and sore you probably do have an infection!

Nothing like air circulating, if I'm not touring each day  I personally prefer not to apply a Compeed and instead I use sterile gauze and adhesive tape as I find this helps the healing process and I can still comfortably ski without damaging the healing skin. 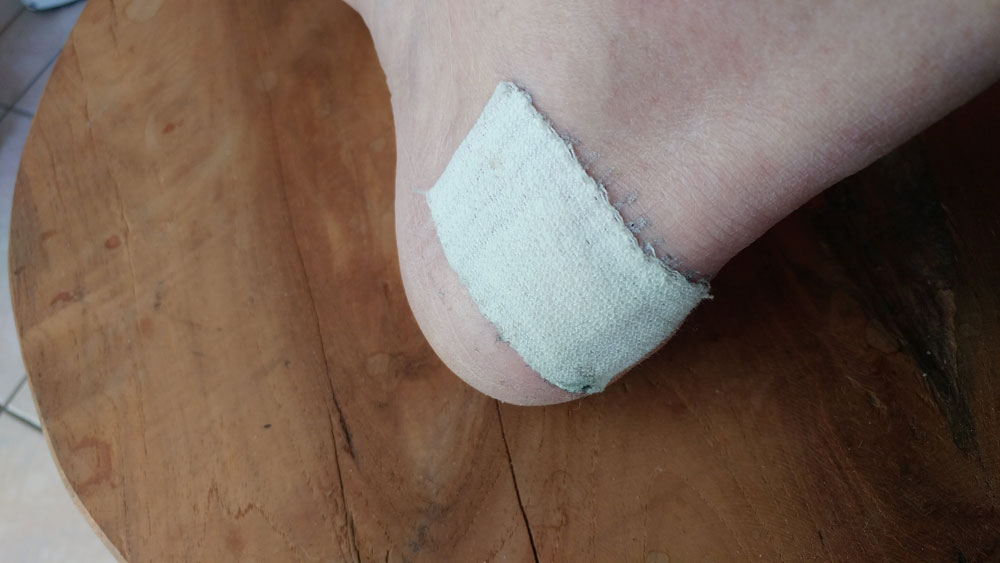 And a big shout out to getting some Hypafix Tape, hard to find in pharmascists but really easy online, such as Amazon. 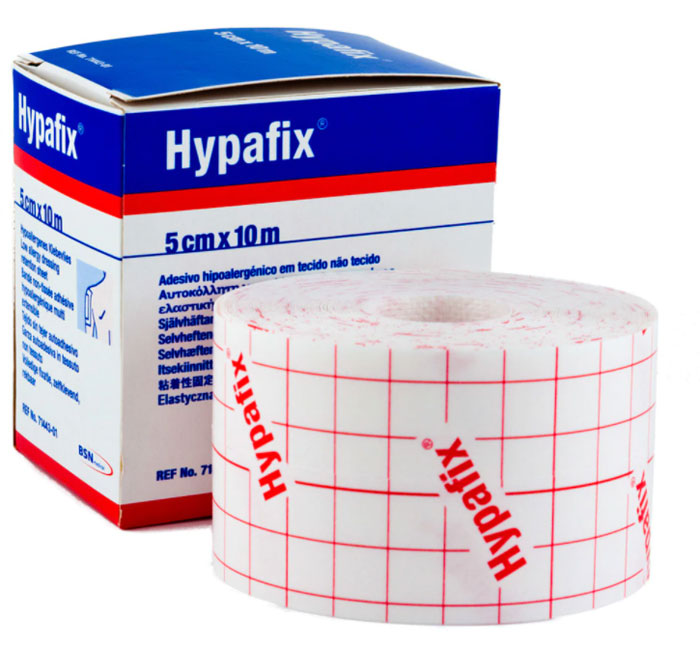