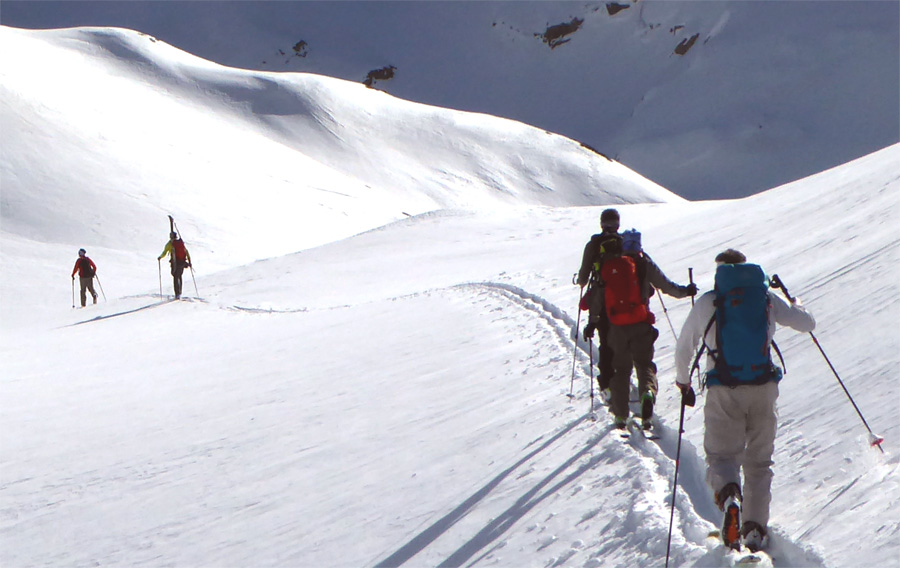 Take only photos leave only tracks. The glory of ski touring is having the freedom of the mountains but there are some unwritten rules and an international code of mountain conduct for all snowboard and ski tourers

Check out our EIGHT do and don'ts for backcountry ski touring...

1) DO TELL SOMEONE WHEN AND WHERE YOU'RE GOING

Call, text, email, Facebook or, better still verbally tell someone where you intend to ski tour so should anything happen and you get into difficulties - or worse - they can raise the alarm if you have not returned. And don't forget to re-inform them that you're safely off the mountain and having a few apres beers.

Alternatively leave a note with date and time inside the windscreen of your van/car for other tourers to see but it may be a few days before anyone thinks to read it.

Often spring ski tours start up some narrow mountain track that's recently been covered and still has drifts and snow blocking it further up so don't park your van in the only turning spot for two miles, leaving no space for any other verhicle to park or manoeuvre safely without mishap, as below. 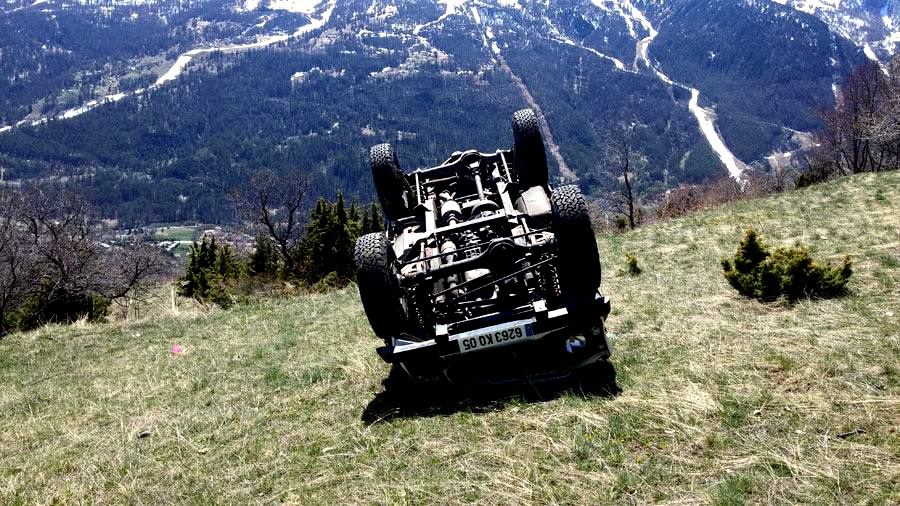 When you're touring in a group it can happen that you accidentally catch the back of the ski of the person in front. Doing this again is just about acceptable. Three times and it's darn rude and annoying for the tourer ahead. If you're that much faster move to the front and take on the task of making the tracks; this will slow you down.

4) DO ALLOW FOR STOPS

Okay so you're super fast skinning up (see 3) and find yourself waiting for others. You take off a layer because that was quite a work out at your pace, have a gulp of water and, then when the rest catch up you're off again leaving them to decide whether to keep going or also shred layers and have a drink thus leaving them even further behind.

Constantly playing catch up is no fun. Anyway unless it's past midday and the snow's melting with avalanche risk, what's your hurry? Enjoy the beauty of the mountains while you wait for your companions.

It's good ski tour etiquette to arrange a rest every hour for a 10 minute break which gives everyone the same stopping goal, a welcome dedicated break for slower climbers - and a chance to take layers off, have refreshment and deal with blisters. 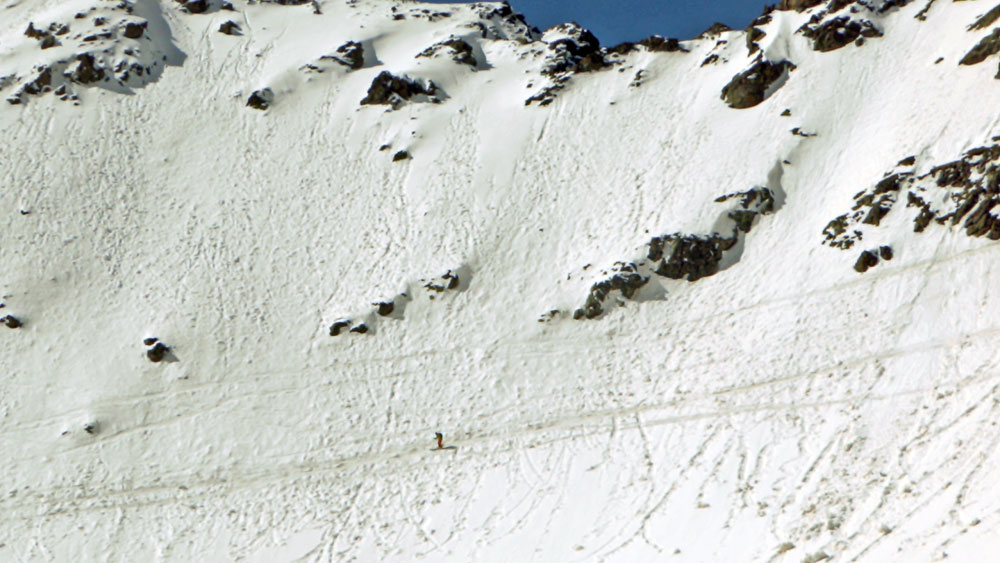 If you're traversing across a higher, steeper slope whether skinning up or skiing across to better snow make sure there's no one below who could be in the path if you set off a slide. Always be aware of potential instability when you 'cut the slope' on a traverse. 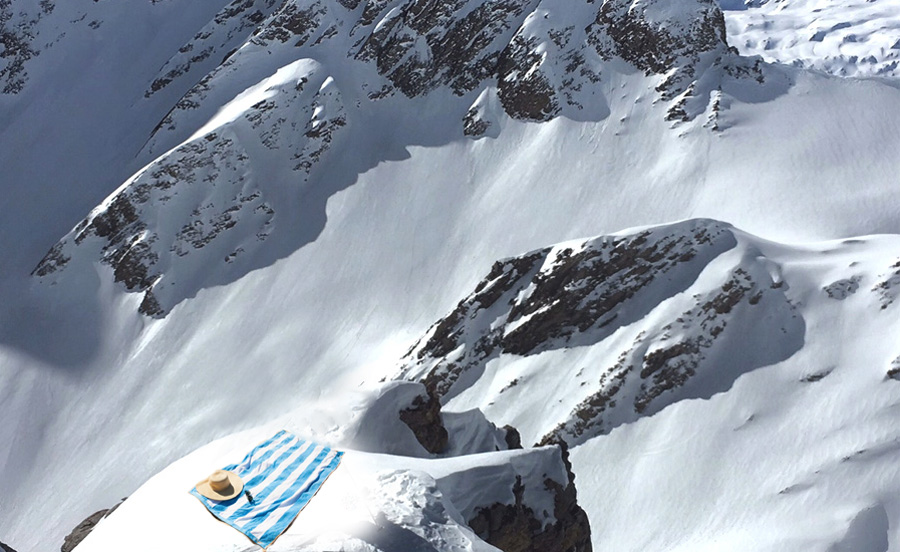 Most ski touring areas offer varied options for climbing - and skiing down. Follow someone else's lines going up by all means but not if it means you're tailgating them (see 3). And, be aware that you do so at your own risk. Who's to say they knew the right/safest route up?

And if a couple or group is having a break and a snack on a particularly scenic rock it's fairly insensitive to stop with them - unless you're German in which case we realise it's your right as you placed your towel  there the night before.

Similarly when others are transitioning as in taking off skins to ski down don't join them even though it may be the best, most sheltered spot on the ridge. And stopping below a higher group is not only potentially dangerous ( see 5) because of the risk of an avalanche from the tourers above but also because they will throw rocks at you if you make first tracks in the perfect powder before they do. 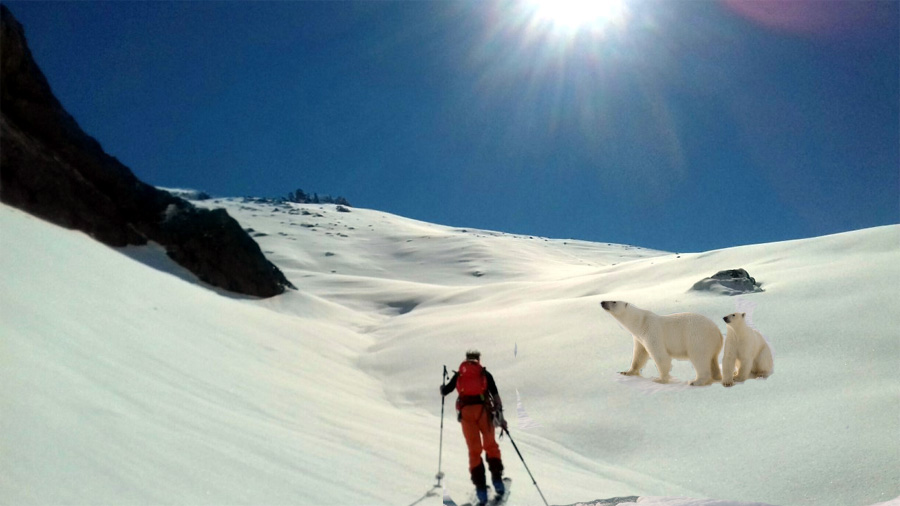 If a ski tourer is on their own and asks to join you then it's churlish to say no. If you were the lone tourer it would make social and safety sense to be with others. But if a group has an obvious mountain guide don't expect them to welcome you muscling in on their paid-for tour unless you're in obvious trouble. It is, of course, unwritten mountain code to help anyone out with physical issues or kit failure.

If you're a couple enjoying a day in the mountain together, unless you are polar bears, you might not welcome a gnarly tourer to join you. Just hope he's not a tailgater (see 3).

8) TAKE SAFETY PRECAUTIONS - FOR YOU AND OTHERS

NB Some basic codes of conduct are so obvious we're not even highlighting as in never drop your energy bar wrappers, play loud music, be tempted to pull up trees or shoot bouquetin.

Respect the mountains. Yes it looks mellow. Yes the snow pack seems safe, Yes others have been up there. Yes you have an app on your phone showing ski touring routes. But if in any doubt  TAKE A MOUNTAIN GUIDE then he or she will take care of 1-7 for you and insist on 8.