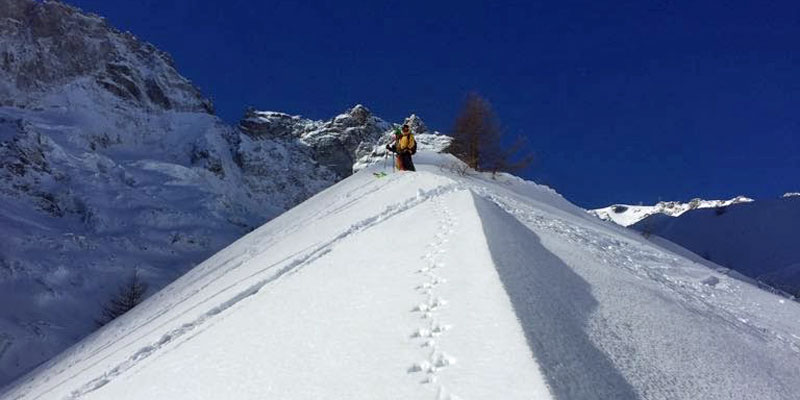 Haring around La Grave to avoid the crowds 14th March 2018

It was always a plan to go to La Grave as the weather was looking good, and should the lift not be open all the way, we would ski tour in Chazelet. But unfortunately many many others had the same idea....

Today was always on the cards given the forecast and our friends over there keep us updated as to whether it might open so we were there well in advance of the many late arrivals.

We still had to buy a pass and even though there were not too many ahead of us, by the time we got the them the lift queue had grown with people already having a pass, but in the overall scheme of things we did get up to P3 well in advance of others and scored some good conditions.

Snow was actually better lower down. As P2 traverse was a no go due to avalanche risk we opted to ski all the way back to La Grave rather than P1 as we knew we'd get on a lift and that there would be a massive bun fight at P1 which sure enough was indeed the case as we went back up.

It really was a very good move. I've never seen a queue like it, in fact at the bottom they were deliberately not filling all the cabins as they knew they had to pack them in at P1.

Once back at the top of P3 we put skins on and started to walk across to the drag on the glacier in the hope that it would open and failing that we'd skin to the very top.

At the drag there were a few groups with guides in front of us and a couple of LG locals I've known for a while and everyone was very optimistic about the lift opening.

I was ready to skin all the way but my comrades talked me out of it. However after 20 mins or so the guides and their groups began to hike up, so we put skins on again and started the climb then a few mins later a skidoo arrived at the lift and things started to look more positive so we skied back down with skins still on and 10 mins later the lift fired up.

Think there must have been about 10 in front of us so we were able to get some good lines in before the piste basher started dragging people over.

We did the drag four times before we decided to head all the way down to have a late lunch in Chancel.

Then it was ski back down to P1 with the traverse in the best condition I've known it, and while my comrades took the lift back I opted to ski all the way as legs felt good, and sweet untracked spring snow on the field on skiers left.

So was a good day, but not classic, snow was not uber light and cold and like the last couple of times I've been there this season it's getting so busy now. But it is still an immense mountain and dramatic terrain and even with all the people you can still be on your own.

And after ski beer at the Castillian was sweet, and again I've never seen it so rammed.

Driving back over the Lautaret there was a delay as a heli was bombing suspect ridges above the old avi tunnels.