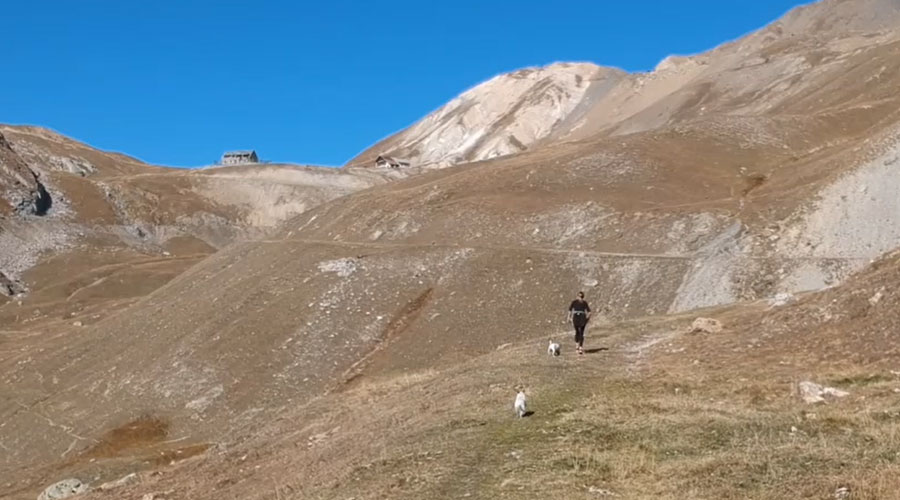 Run up to the Col du Galibier via l'ancienne route with the dogs and filming with the drone has to be the best way to strengthen the legs for the ski touring season and the best exercise to get ski fit...

Finally I succumbed, agreeing to run up to the Col du Galibier with Elaine and, of course, Les Randos Chiens.

Usually when Elaine runs up the old Galibier road or the l'ancienne route  I go with her on my MTB, but I've started running again and going up, for me, is nowhere near as bad as running on level road, it seems, because of calf muscle pain on the flat.

For getting fit for the coming ski season a run up the Galibier is way better than playing around in a gym, and it's not just the climb that gets the legs working but running back down you can feel the thighs exploding, getting the quads strong for skiing, Check out our new 7 Fixes for Ski Fitness feature where uphill running is number one.

This was the first time that I climbed up above the actual Col itself, about another 30m and there is a really good tableau d'orientation up there.

In terms of running up the Galibier versus ski touring, running is slightly faster at just over 600m per hour, but it does very much depend on the terrain

As I've been playing around with the drone using new software and firmware updates some of the functionality seemed better so I opted to take it with me.

As I'm a wee bit stronger than Elaine, who is feckin amazing doing stuff regularly like this, I was able to get ahead and set the drone up and film her, and I even caught a couple of guys on MTBs.

Only issue, and the air was blue, was that all the automated filming functionality (active track following and smooth pan shots) were missing so I had to film manually, as I later found out the reason why was that the remote controller Sports Mode switch had moved.