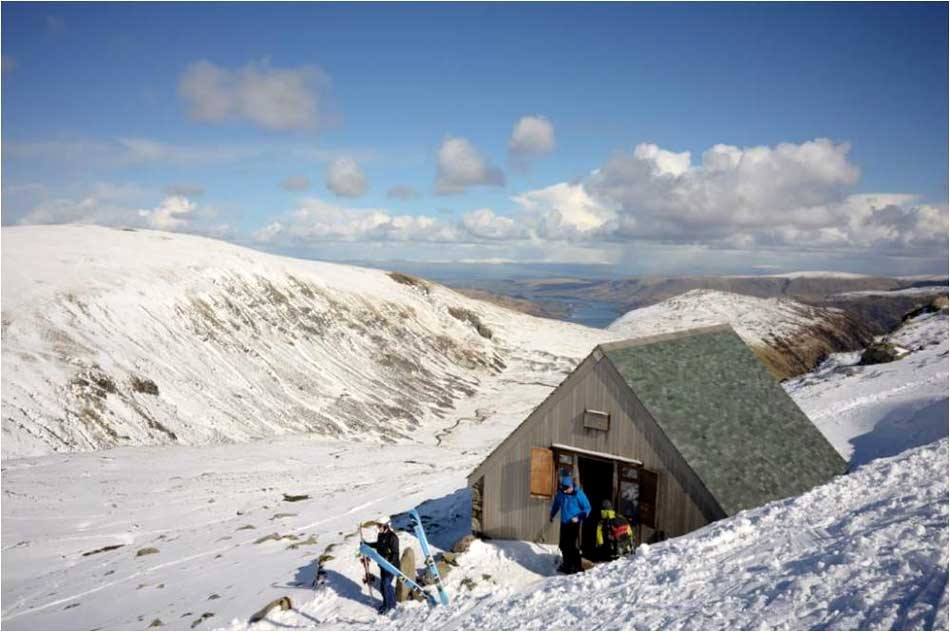 What is the future for skiing next winter? Avoiding covidiots on the piste? Why even go to resorts with no apres? So will it be ski touring in the Alps? Or maybe skiing in England as a last resort?...

Being over fond of alcohol, nicotine and many pork related products, I’ve never been ski touring. Until now, worries about my fitness have prevented me from ever donning skins. But, given that the threat of infection from C-19 will probably linger into winter 20/21, I might finally be persuaded to try uphill skiing next season.

Downhill skiing has always been moderately dangerous. I’m not talking about self-inflicted injury, being buried in an avalanche or making a navigational error – skiing off a cliff or into a crevasse. The greater danger comes from the other people you share the mountains with. On-piste my radar is usually set to pick up fast approaching ski yobs and generally out-of-control Jerrys. This winter it will have to be recalibrated to detect covidiots too – although I suspect there will be some demographic overlap.

It might be best to avoid the lift systems

Fortunately, in suburbia covidiots can easily be identified. They wear gloves but no face mask, and have no concept of what two metres looks like. They ride bikes down pavements next to empty roads and sunbathe on narrow country paths. Occasionally you can meet a whole herd of them walking four-a-breast straight at you. They are especially prone to doubling back down supermarket checkout queue because they have forgotten that they needed taramasalata. If you want to do some pre-season honing of your covidiot avoidance skills, just go down to your local park.

Even if the resort operators manage to implement some kind of social distancing, there will inevitably be some skiers for whom the slow forces of evolution have yet to take effect. So, it might be best to avoid the lift systems.

Ski touring would safely get me up into the mountains and away from the covidiots yet a myriad of infection risks will still need facing just getting to a resort. Planes, airports and transfer vans, already places of purgatory, will be even worse if we are forced to wear face masks. Driving to the Alps, instead of flying, might be a better option – although I don’t recommend doing it in an antique Land Rover (anyone who has read SWD1 will know why).

Then there is the small matter of accommodation. A self-catered chalet shared with household members might work. Although, after spending ten weeks of quality time with my family, they are the last people I want to go on holiday with!

There is also the deeper philosophical question that has been troubling me: do ski resorts work without rammed bars? Is it possible to après without touching fomites or exchanging bodily fluids with strangers? Does skiing work, without drinking?

Which leads me to another question. Given that I’m going to ski tour and therefore don’t need lifts, and I don’t intend to visit any restaurants or bars, why would I bother go to the Alps? We have mountains that regularly get covered in snow here in the UK.

I’ve long since thought it would be fun to ski every real snow ski slope in England – well, maybe ‘fun’ isn’t quite the right word. However, I often find myself musing about writing a guide book called ‘Skiing in England’. Unfortunately, the idea has yet to gain traction with mainstream publishers.

High on my list of UK mountains to ski is Raise, home of the Lake District Ski Club (main image). To be honest, the list isn’t very long there being only three other ski area in England (Yard Moss also in Cumbria, Weardale in County Durham and Another World in West Yorkshire). The main problem I have with using the drag lift on Raise is that you have to hike halfway up Helvellyn to get to it. Which leads to my second problem – finding someone to come with me.

More of a ski mountaineering than ski touring exercise

Indeed, the snow line on most of the worthy UK peaks is equally distant from car parks making my endeavour more of a ski mountaineering than ski touring exercise which will require even greater fitness, more off-piste courage and less chance of companionship - please feel free to apply. In previous summers I have stood on top of many a UK mountain and seen viable ski descents, while wishing for another ice age. Maybe this winter my wish will come true and lots of snow will fall on the UK.

Hopefully, by December there will be no quarantine needed after foreign travel,  we’ll all have antibodies so the covidiot will just be
idiots once again, and Alpine resorts will resemble some sort of normal. If I can’t go ski touring in the Alps, spending a winter in the Lakes, (probably just walking not skiing), does have its appeal. In the meantime, I’m laying off the pork pies.

Find out why driving to the Alps in an antique Landrover is not recommended and other cautionary tales from the mountains by Chris Tomlinson in his trilogy Skiing With Demons I, II and III.

It's a Human's Life: Stuck In 10 Day Quarantine

The Humans said we dogs would be put in quarantine if we didn't have our jabs so it's kinda ironic that they are the ones now locked up - and now we're all in the doghouse for possibly 10 days...more

The 2021 Cold Rush: Property Boom in the Mountains

Second home in the mountains? Or is it now your semi-residence? There's a rush to buy property in the mountains to spend more time skiing, even WFH - and as a refuge from future pandemics...more