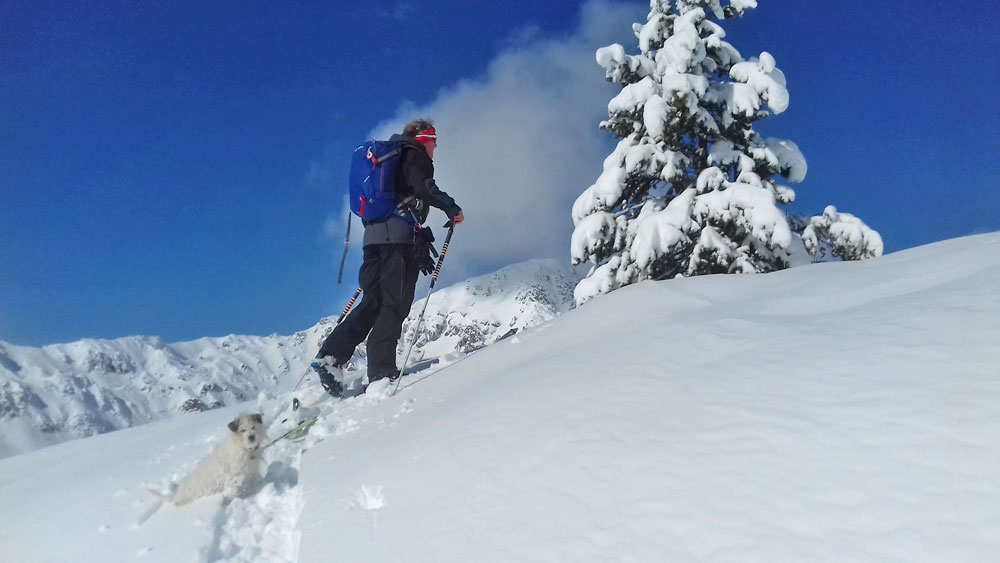 When the Going Gets Tough, the Jack Gets in the Pack

Skiing with dogs can be a challenge. The first ski tour of the winter with powder and cold wind resulted in our Jack Russell skiing down in the backpack.

Many of our ski tours are accompanied by our two very hardy Jack Russells. Winter and spring. They come up and down, keeping to our tracks, enjoying being out on the mountains in the snow as much as we do. But sometimes the going gets a tad tough for them.

We'd been watching the snow line gradually drop down the mountains wondering when we would be able to go up for the first ski tour of the season. Here in Serre Che we have had rain pretty well every day since last Friday with the freezing level coming down from around 2,600 to circa 1,900m along with strong winds at altitude.

Yesterday we took the dogs for a walk while there was a break from the rain and sending them haring all over the place with one of those ball throwers that lets you catapult it far further than you could throw.

Four or so hours later Kiki, the mother Jack, went lame pretty bad, which seemed bizarre for it to take so long, or maybe she heard us talking about the possibility of a ski tour should conditions be good and decided to pull a sickie .

The morning started off cloudy, at the top of the valley (Lautaret end) it was enveloped in low dense cloud, so that ruled out going up that way.

Our next option should the weather clear would be to see how far we could drive up the Granon road. The cloud slowly dissipated and we got our gear together, which for the first sortie of the season is always a major faff, new batteries in transceivers, changing FirstAid kit from a tropical one to a mountain one and a whole load of other gear to get together. Finally we set off with just Beanie, the younger (and hairier) Jack Russell leaving Kiki curled up on her bed enjoying a duvet day.

As the cloud can be so localised we still could not be sure until we were near the Granon turn off.

The last couple of kilometres of road was a tad gnarly and you do get paranoid about getting stuck all the way up there, so have to be sensible and turn around and park up rather than trying to drive another 300m in ever-deepening snow.

We parked at 2,136m and then skinned along the snow-covered road till we turned off and headed up the mountain.

The snow was very deep in places where it was blown into gulleys and heavy to skin through, the better option was to skin up exposed ridges where there was not too much snow but it was very cold with a strong wind blowing.

After 45 minutes, Beanie was having issues with the cold and the deep snow. As we were making fresh tracks rather than following others, it was hard going for me and even harder for her coming behind, the snow being her head height. With her longer fur, the snow was building up in balls around her legs and her face making the going extremely tough for her. We picked her up and I tried to skin with her around my neck like a lamb, but that was none too successful as she toppled and fell into the deep snow. So we transferred my extra kit including the drone into Elaine's bag and stuffed Beanie into my backpack (transferring shovel and probes into the front pocket). She happily snuggled down with just her head showing and a Buff to keep her warm.

She was completely unfazed by the ski down. It has to be said, though, that it was not as good a ski for us as we'd hoped, but hey I'm being really fussy. If it were not for Beanie we probably would have gone for the summit and had a better steeper ski, but also those first turns in a varied windblown snow pack and with a dog in the backpack I think one could be excused for being a tad cautious. 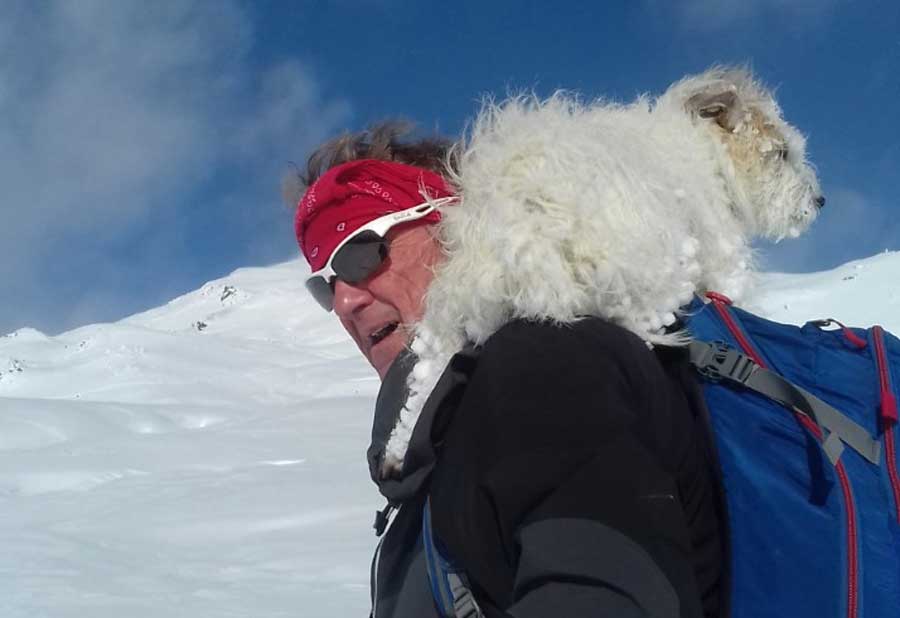 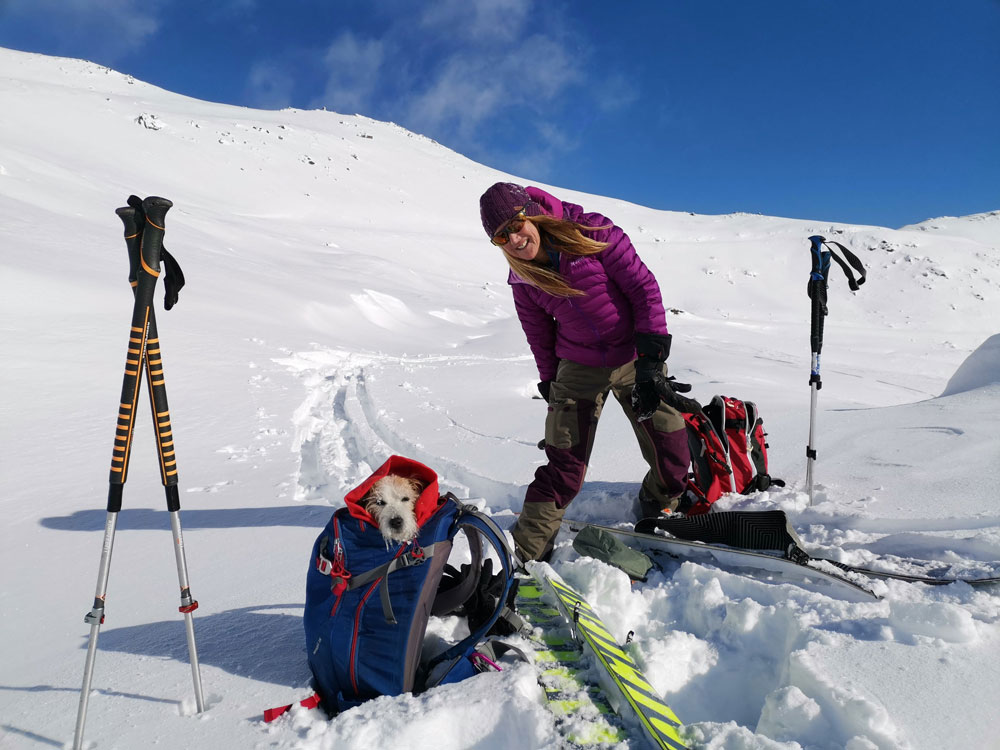 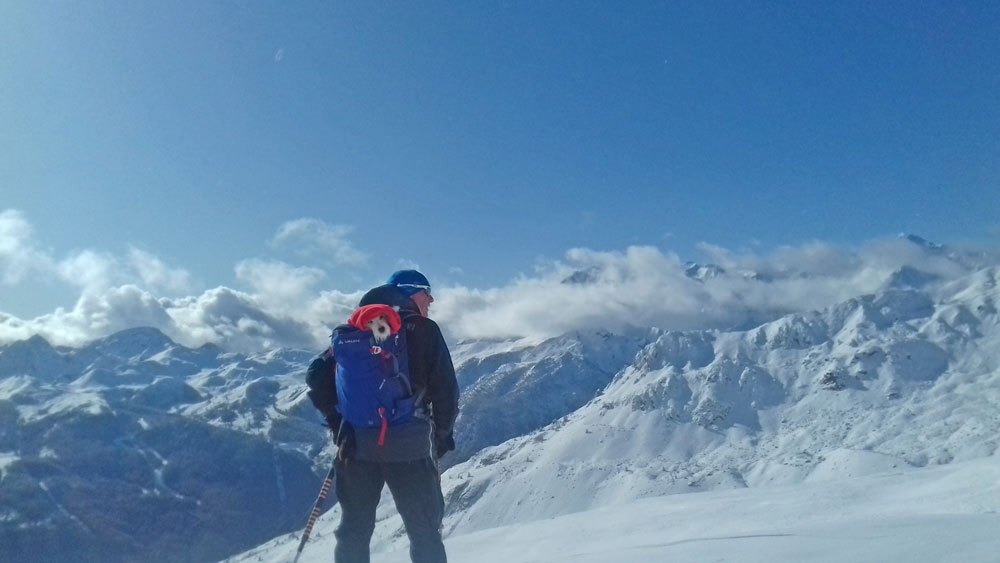 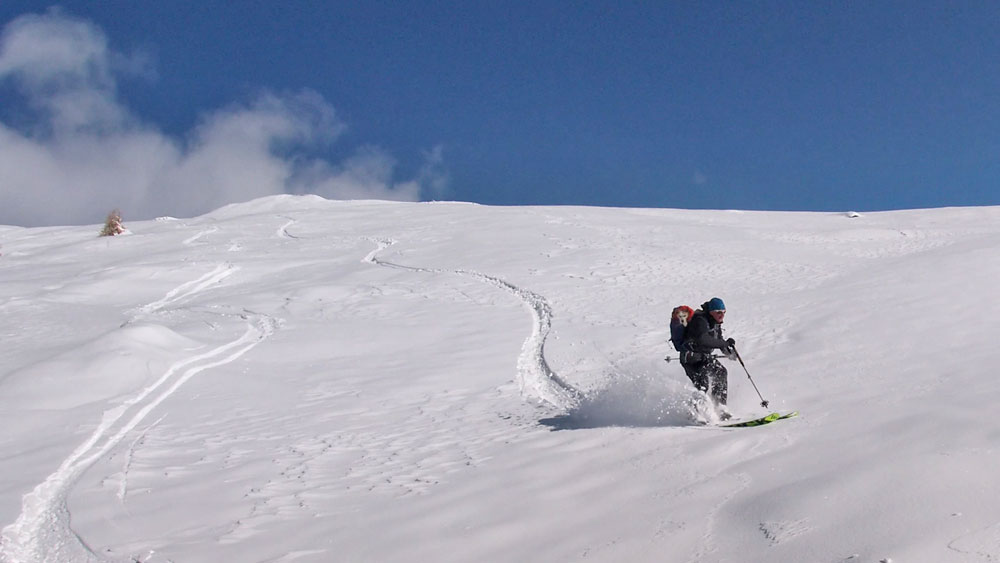 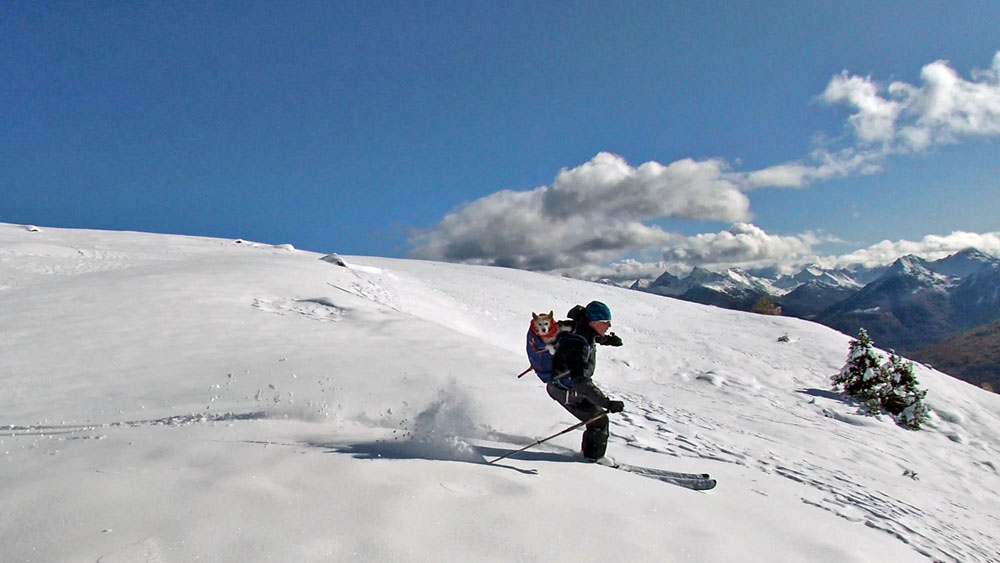 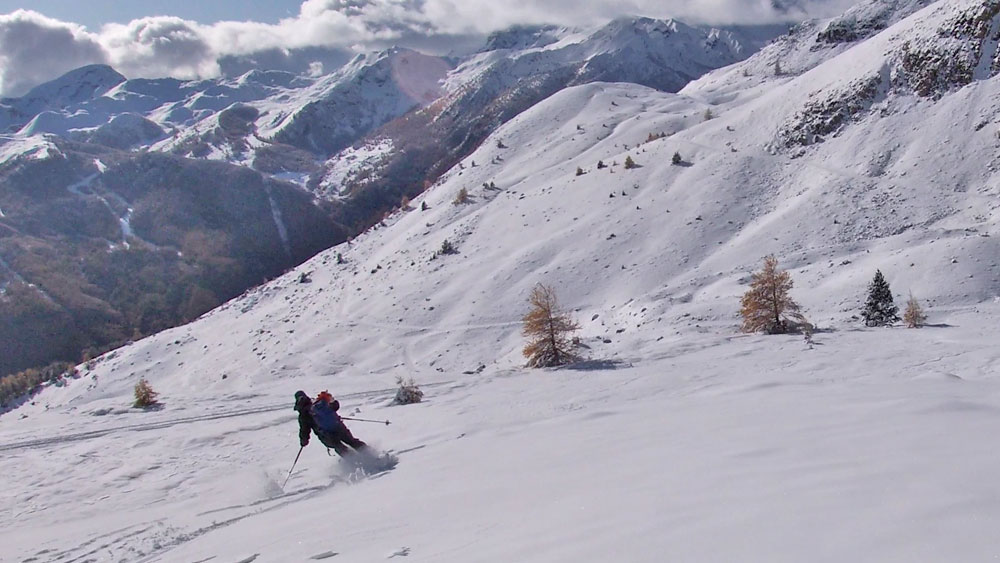 And a photo of where we parked up, by the time we got back down a lot of snow had melted and we were very much in the sun, which can be an issue as people drive up thinking the road is clear and they turn a bend into shadow and suddenly they find themselves in axle-deep snow.

And the Granon road is one of the steepest in France at well over 10 percent. 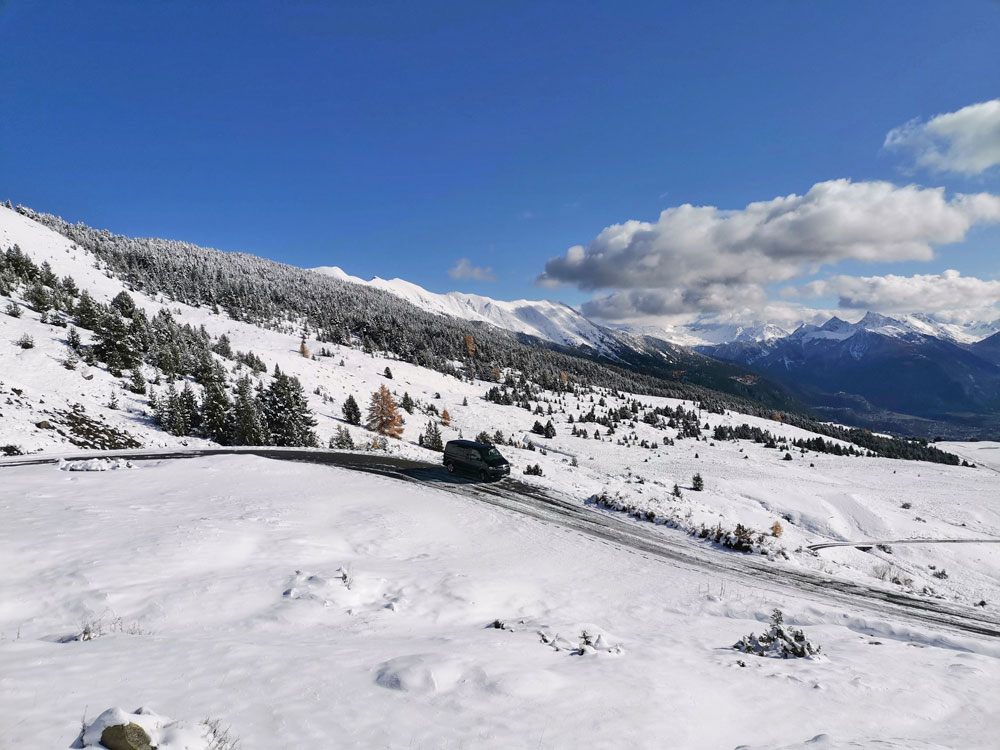