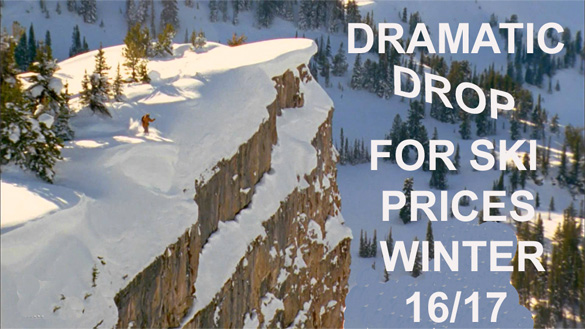 If ever there was a time to buy skis it's now. Prices have dropped for next winter, 16-17 due to market pressure. Catch our report from this year's SIGB Ski Test in Kuhtai, Austria.

Not only will you be spoilt for choice as the selection of performance-led skis including women's versions, is better than ever, next season, but, also, the prices across the top brands - from piste to powder skis - will be cheaper in the UK. What's not to like? Editor, Elaine Deed goes bargain hunting.

From the top brands showing next winter's ranges to UK retailers and press in Kuhtai, Austria, the choice of quality and performance skis is probably better than ever in the history of skiing. The manufacturers have modified, tweaked and honed their designs to create lean (and fat), mean skiing machines from piste to powder. There's not a bad ski among them.

So it all comes down to personal ability, style and preference. And price. The price tags have dropped considerably across the board to be in line with Europe. Whether it's because of earlier optimal exchage rates for stirling against the euro or just market pressure, the end result is good news for UK skiers.

While prices are shrinking, All Mountain skis are getting fatter - and more floaty for powder - while being better designed for edge control on the piste. But there's a debate raging as to whether to go under or over 100mm at the waist for All Mountain and, especially for touring (catch the ups and downs of new touring kit for winter 16/17 and what's happened a year on from our Tech Editor, Gavin, below off piste in Kuhtai). 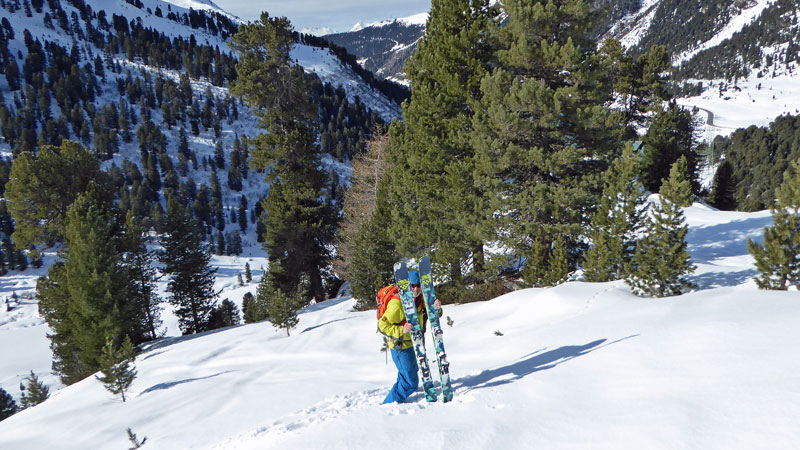 There were few Big Mountain skis for women at 110mm or more waist on offer at under 170cm length from all the brands at Kuhtai. I counted two, Head's Big Joy, 110mm waist and 168cm and Nordica's La Nina, 113mm waist and 169cm, suggesting that they don't see that much demand for really fat skis for women, so weren't offering them for testing. As it happened, there wasn't any deep powder during the test week in Kuhtai anyway!

There were more in the Freeride and All Mountain ranges but even one of my own favourite skis, this winter, the 169cm Santa Ana, 100mm waist, from Nordica (below), now has a slimmer sister with 93mm waist that is deemed a far more female friendly version. They're a nice ride, too. Although there was no deep powder, they were certainly great in the 10cm of fresh beside the pistes which, arguably, is as far as many women will venture. 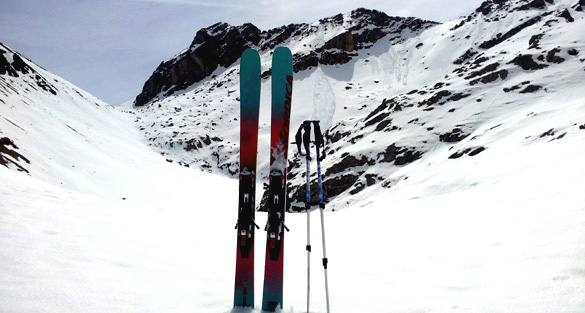 And, significantly, SCOTT have brought back women's skis, seemingly by popular feminist demand. Now there is not only The Luna but, also, women's versions of The Punisher and The Ski. I tried The Punisher W, 165cm length and 95mm waist and The Ski W at 166cms and 89mm waist. Both were extremely enjoyable rides - and I'd buy either in a heartbeat. If I ever need to replace my faithful five year old SCOTT Realms 166cm and 82mm under foot, it'll be with The Ski W.

Of course, when they say women's versions, what they mean is the same as the men's but in shorter lengths. Sticking a 'w' on the men's label and offering smaller sizes under 170cm seems to do the trick for other brands, too, including Atomic and Armada. This is because most of today's mainstream skis are made of lighter, more flexible and responsive materials using all the technology for developing lightweight touring skis and boots, last season, to create better perfomance kit for all mountain riding, next year. So pinking and shrinking and adding a 'w' is definitely a valid option for women's skis.

Salomon, though, have a Freeride range that's been completely redesigned for women . The spec is a complex-sounding new technical construction, which the guys at Salomon are describing, to make it simple, as more of a 'cake' filler rather than a 'sandwich'. If their new QST Lux 92 Freeride, which I rode, is anything to go by.they've got the recipe just right. And at £350 it, er, takes the biscuit.

I, also, really liked Armada's 170cm ARW 96, another great All Mountain ski for women, which is, okay, a tad longer than many women like, but turned easily when I rode off the back through the trees in the fresh - and they're a steal at £280. For women who want to do serious powder, though, I highly recommend the Armada VJJs - mine are a whopping 115mm wide and my absolute favourites off piste and backcountry.

So, to continue the Mary Berry analogy, what about the icing on the cake? The graphics. A few of the 'old school' ski brands stick to the more traditional 'signature bake' toppings like Fischer with their ISPO Gold Award winner,The Curv, which we all had to try as it's the hot pro-style carving ski for the new season - and, yup, it can certainly crank a turn on the piste. Ladies, if that's what floats your boat - or, rather, cranks your planks -  then TheCurv TI at 164cm and 68mm waist, is yours for £485

But then there are the 'bake off; show stoppers - and, if you seriously can't make up your mind between this or that ski, then these are the graphics that'll sway you.

If I had to choose I'd go for the optical graphics from Black Crows and SCOTT - and I'm quite in love with the stylised safari patterns at Volkl with, sometimes, different graphics for each ski). 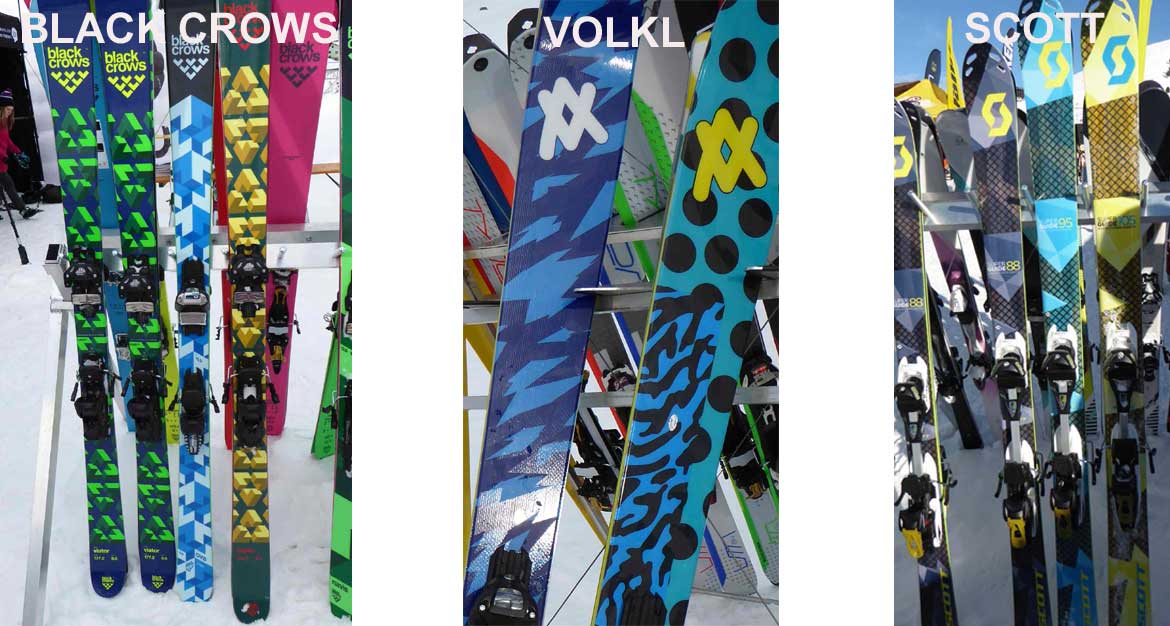 Meanwhile, I'm not sure why powder hounds have the most awesome graphics except, maybe, because the skis are often wide enough for Michelangelo's Creation of Adam. The awesome Atomic Benchetler Big Mountain skis (created by backcountry legend, Chris Benchetler) with 120mm waists and all of Armada's range, make works of art out of a pair of skis. When you're done with them you can hang them on the wall and, in 50 years time, they'll be selling them for a fortune in Antiques Roadshow. 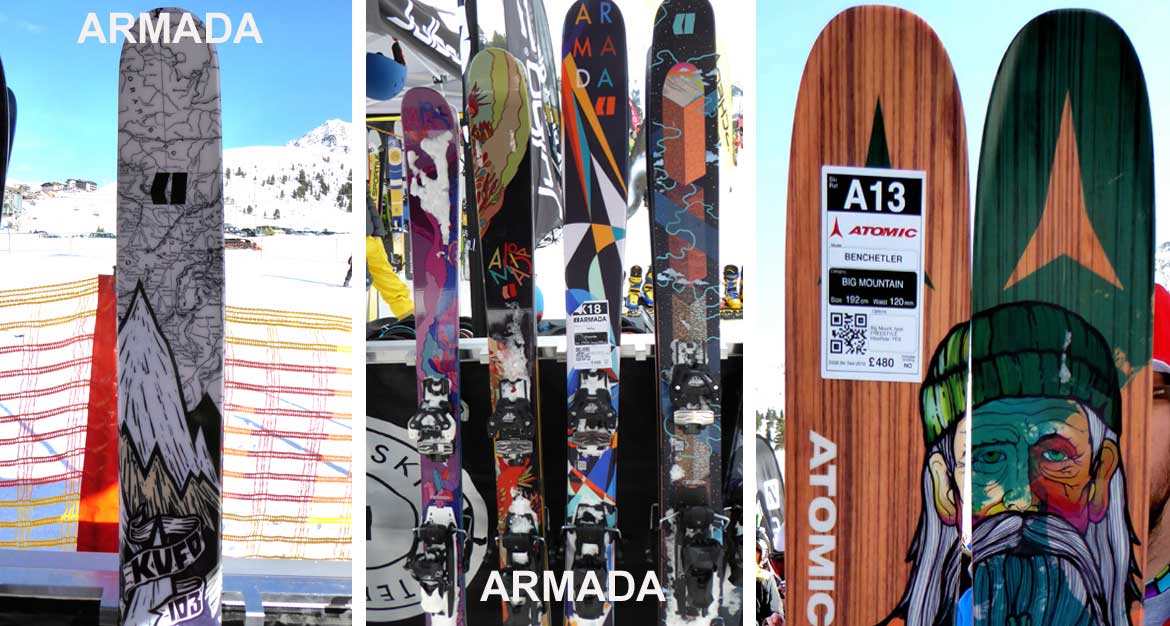