The Danger of Collisions on the Piste. The Latest Risk Warnings for Skiers and Snowboarders 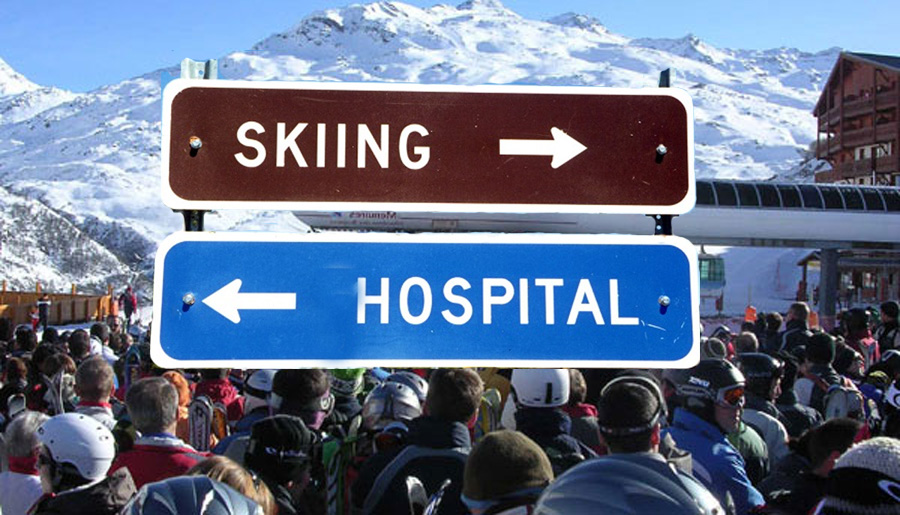 DANGERS ON THE PISTE. Why backcountry skiers would rather risk avalanche than the danger of injury on the pistes with the holiday hordes and the out-of-control freaks

Flags warnings of Piste Collision Risk have been created with Risks from 1-5 according to the number of skiers or snowboarders and the twat factor...

Risk of Collisions on the Piste

*Jerry - American for clueless twat, Also gaper / joey. Entertaining to watch, see Jerry of the Day, but a high risk to encounter.

'A growing body of research suggests that people unconsciously use simple rules of thumb, or heuristics, to navigate the routine complexities of modern life.' It was in 2018 that Luke Owit of the Pisteurs' Acadamy adapted Ian McCammon's internationally recognised observation with regards to avalanches to suggest the heuristic traps that also occur in recreational piste accidents.

But unlike avalanches, NO piste collisons are accidents of nature, they are ALL accidents of stupidity / lack of control / twatness.

The common traps are:

'I'm a good skier or snowboarder, I won't have a collision.'

Never underestimate the Jerry's ability to collide on the pistes. However good you are, you can still be a victim. It just takes one punter with Twat-itude.

'It's only Piste Collision Risk 3 today, I'll be safe'

Most Piste Collisions occur when you think it's safe. Just because it's a Saturday, change-over day, Piste Collision Risk 3 ie Moderate doesn't mean there's NO risk. So beware Twaturdays and also,low vis which may mean fewer punters BUT, also, you won't see the Jerry hurtling your way (note the 'hurt' in hurtling?).

'I've skied this piste loads and never seen any collisions.'

Just because it hasn't happened, doesn't mean it won't. For instance, most pistes go downhill so you wouldn't expect to see a Jerry skiing uphill towards you. Right? Well, watch the video, below:

When you're on the piste these are the Jerry Jones 5 RED Flags, warnings of possible collisons, to look out for:

1st Red Flag: Hordes out for the holidays.