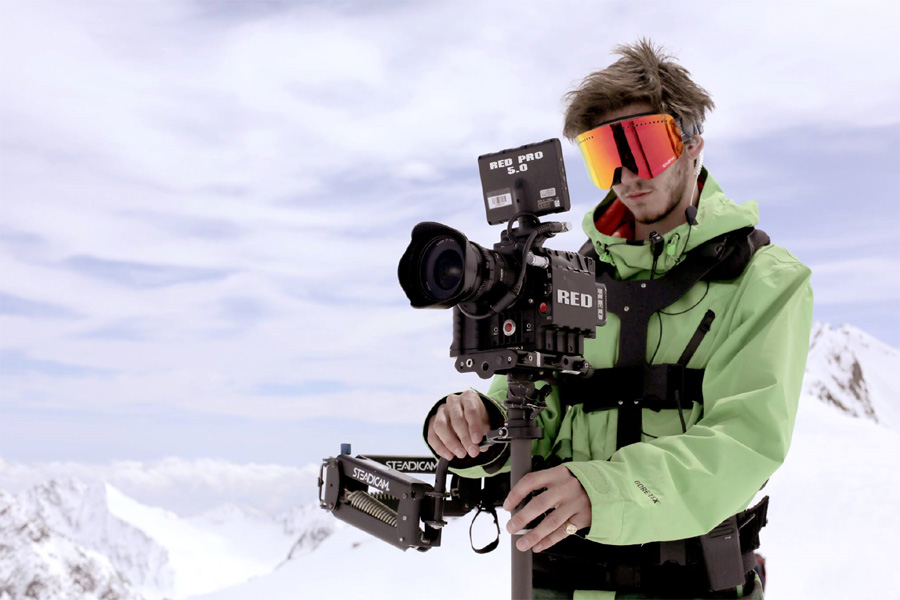 Skiing with a 25kg rig all day and logging endless footage that's life for the man behind the camera of Team GB Park and Pipe. Our snowboard contributor, Faye Young, catches up with action cameraman, Jon Moy.

When you watch the GB Park & Pipe team updates throughout the season most of the time the man behind the camera is Jon Moy. While the athletes are out training, Jon from Life Cinematic is following them around getting the shots to keep the world in the loop with how everyone is doing. It's a really important winter for the team as it is an Olympic qualifying year so the pressure is on and the stakes are high.

So Jon, travelling around with the GB team must take you to some amazing places. Which has been your favourite trip so far?

I would probably say that the best so far has been our two month road trip around the US, last year. We flew out to Colorado, shot there for a few weeks before driving through Utah, Arizona, Nevada (quick stop in Vegas) and onto California for the World Cup at Mammoth Mountain.

After that we drove back to Colorado (again via Vegas) where we randomly got upgraded to a penthouse suite, so decided to go pretty large. We shot at Breckenridge and Keystone for a bit before flying over to the East Coast for the Boston Big Air in Fenway Park Baseball Stadium (which was epic).

We wrapped the shoot there so paid New York City a visit where we got clamped, towed and fined twice all in one day – next time don't drive to New York. After rescuing our car we flew back to California for some other work in Hollywood. Then edited out of Airbnb's for a few weeks so we could drive the Big Sur route along the coast to check out San Diego, LA and San Francisco.

It's hard work keeping up with everyone with all the heavy camera equipment and constantly facing problems with the cold challenging conditions. What is the most frustrating thing that's happened to you while filming?

I think the most annoying thing so far has been in 2015 just after we bought our first Red camera. There was a problem with their new monitor system; which meant we had no image on screen, so could not see what we were shooting at all during the Park City World Cup in Utah. We had to guess exposure, framing and focus for a week until Red send us a replacement. Luckily we guessed right.

Behind the lens at Life Cinematic do you work alone or is there a team involved?

I shoot the GB Park & Pipe stuff with my colleague David Tallon. We've known each other since film school so have our rhythm dialed pretty well at this stage. Generally our shoots outside snowsports require more crew and the team would vary depending on the gig. 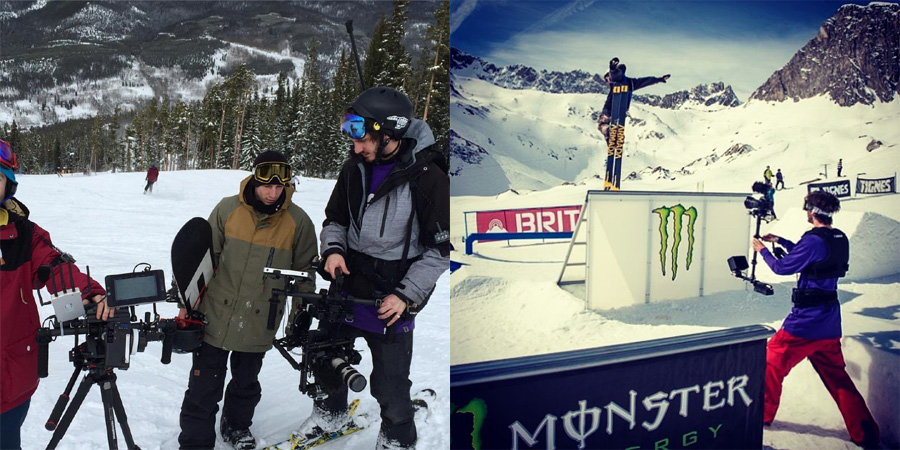 When you get some time to yourself do you manage to ski much? Are you a park rat or an early morning powder hunter?

Haha, time to ride myself? We got a total of three hours personal riding done over that two month road trip I mentioned. I don't ride park on shoots because I do a lot of follow cam with heavy rigs and can't risk an injury stopping me from being able to do my job. But when I'm not on a work trip then, hell yeah, unless there's powder. Then the fat skis come out.

Filming is a massive part of your day but how much time generally goes into editing footage?

A lot. Although probably the most time goes to logging the footage. We have about 30,000GB of shots for GB Park and  Pipe so far, so it's pretty vital that every shot is catalogued in detail. Each clip is tagged with the rider's name, the trick, whether it's switch, backside, left or right spin, what grab it is, what country, which resort, time and date, what type of feature is in shot and a rating out of 5 stars for how potentially useful the shot might be. It's pretty dull work but makes the edit itself far more creative, and when dealing with that much material I think I would go insane trying to make any sense of it without the logging stage.

If you could choose one athlete to film all season who would it be?

That's a hard one. Jamie Nichols has got to be up there because he's a good lad to lap around with and ridiculously consistent on rails. Most shots with him get at least 4 stars. Woodsy, also, because his riding is so stylish, makes it worth skiing with a 25kg rig all day. Hah or maybe Joe Hides because he's the nicest chap you'll ever meet and is totally insane. 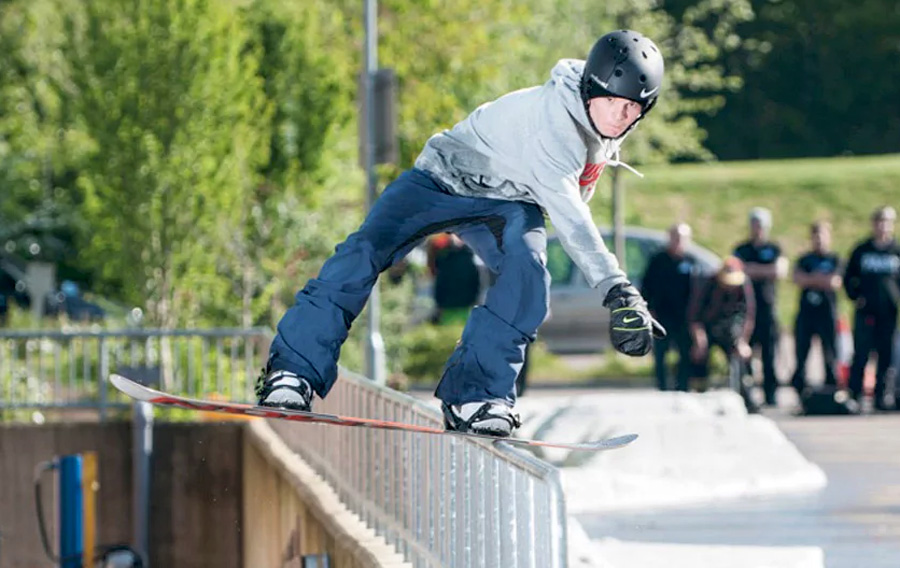 Jamie Nicholls consistant on the rails

If you were to place a bet on there being a slopestyle medal for Team GB at the Winter Olympics who would you put your money on?

Slopestyle is really anyone's games at that level. There are many people who have the potential to podium, and so many factors that can affect things on the day. However, I'm sure Woodsy will be very determined to better his last result, after that injury in Sochi held him back last time. Billy could do it and not to mention Katie Ormerod who is killing it in competition these days. 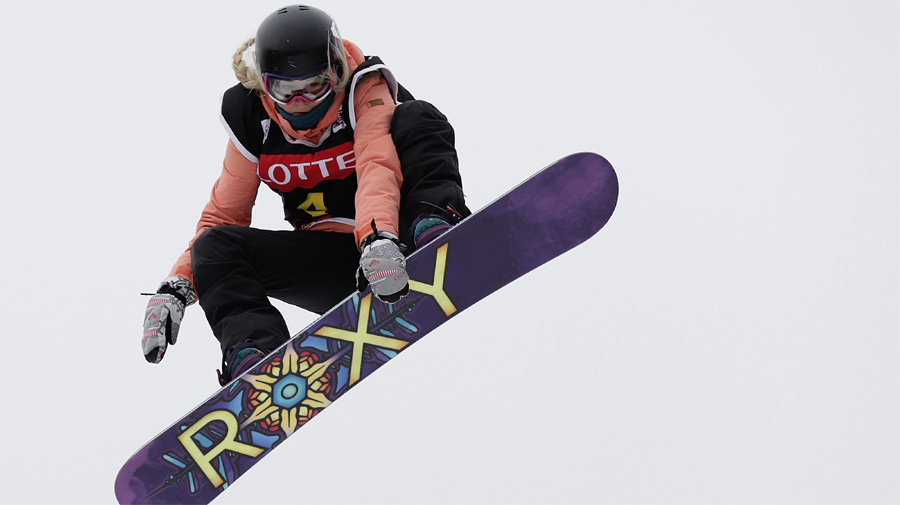 Being from Bournemouth in the UK you spend a bit of time riding dryslope. How is the scene there at the moment? It seems like the uni teams spend a lot of time there in the summer!

Snowtrax is rad, I love that place. I grew up riding dryslope in the Midlands so the process of lapping around a small plastic slope is very close to my heart. Most of the time the scene is quite local, but super vibrant. As you say, there's the uni crew, as well as a solid bunch of up-and-coming kids (some of which are now involved in the GB Park & Pipe development programme) which is great to see. A few times a year they hold 'Air Attack'  (freestyle comps) which brings loads of people down of all ages, from all over the country. They're great fun. But, yeah, dryslope in general is a great thing and Snowtrax kinda feels like a second home at this stage.

When the ski resorts have closed and it's time for some summer sun what other sports do you like to do?

Kitesurfing! I never thought I would find something as much fun as riding in the mountains until I learnt to kitesurf. It turns the British seaside into such a rad place. Some days you get flat water and it's like a park day for freestyle. Other days the storms come in and it's like the most epic of big mountain days. We live on an island so there are great spots, literally, everywhere.  If you have never tried it, do it.

Finally, let us in on the real gossip.. Who is the messiest room mate on the team?