MAKING LIGHT OF AN ABS BAG 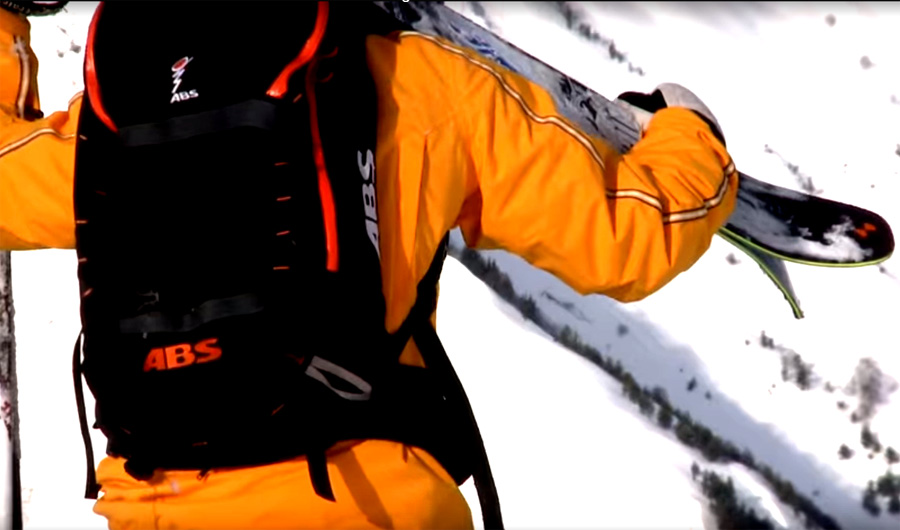 Should you pay out for an expensive avy bag if you're going backcountry? Elaine Deed triggers the debate.

A video has gone viral on YouTube. It's of a skier doing perfect powder that starts to slide - and slide. He tries to ski out of it but the avalanche gains momentum. The next thing you know he is rag-dolling in a rolling mass of white. Cut to a heli landing - and there he is at the top of the crud, lying on the cushioning orange wings of his airbag.

Watch this heart-stopping video and then ask yourself if you need an avy bag? Yes, thanks to his ABS bag, the Freeskier, Aymar Navarro, who was doing a film shoot in the Spanish Pyrenees, survived with only bruises.

If ever there was a visual proof that buying an avy airbag might save your life, this is it.

But, I have to admit, that when my husband bought an ABS bag two years ago for £650, I was horrified that he paid more for a backpack than I would for a handbag. And quite frankly, I declared, I would rather have a handbag than a large lumpy pack on my back.

Fast forward to last winter. Most of my husband’s guy friends now have ABS bags (who wants to be the only one without one in an avalanche?) and a lending system started with other halves. So when we went to Tignes in January, I had a friend’s 25L ABS to wear for the week.

We booked three days off-piste skiing through Evolution 2 and I noticed that they had small ABS bags for clients so, on the first morning, I left the bigger bag behind. But when the bags were handed out, mine did not have an activation handle because they did not have enough ABS ones to go around. So, needless to say, the next day, I lumbered under the 25L ABS on the basis that, heavy though it was, better to have an airbag in case of an avalanche, than none at all.

The bag, though, was not comfortable and incredibly heavy once filled with shovel, probes, spare layers and water bottle. It was also long in the body (the owner is a guy over six foot) so, sitting down in a bubble, it rode up my back and tipped my helmet forward.

Two months later, before going to Serre Chevalier for four weeks in March, I decided to bite the bullet, blow the month’s mortgage, be safer and buy my own ABS. But it had to be smaller and it had to be lighter.

I chose a Powder Base plus zip-on 15L bag, the base unit weighing 1.9kg. I would have liked the sort of colour alternatives you'd expect from a Mulberry. However, this winter, other manufacturers are entering the market, such as DaKine, creating size and colour choice. Also the Powder line now has alternatives - and I am tempted by the new lime/red zip-on backpack for £45 to zip on to the ABS because, yes, I can't help caring about what goes with what style-wise (manufacturers of women's gear, please note).

I, also, went for a carbon canister, more expensive but lighter than steel. It all cost £714 from www.snowsafe.co.uk  (although, when you test the ABS and return the original canister,Snowsafe do give you back £50 or a  £75 voucher to put towards another product so I bought a BCA DTS Tracker 2). But it is an eye-watering amount of money, more than I have ever paid for any other piece of kit and more expensive than an off-peak week in Chamonix - so I guess if it means you can't afford the ski holiday, it's a bit pointless buying the bag.  But, hey, the thing is that when we are talking about a potential life-saving bag, how much is too much? A Birkin might be a great style statement but it's not going to save your life.

I called Daniel Hollingsworth of Snowsafe expecting him to confirm my theory that he is selling more lightweight ABS bags especially as more women will be wearing them? "Er, no, not really," he admitted, "We still sell 95 per cent to men."

Women, it seems, would still  rather have a handbag than a large lumpy pack on their backs.

If watching the video, above, isn't enough to convince anyone, male or female going off-piste, then just consider the figures. Over the past 20 years, 98 % of all avalanche victims with an activated ABS Avalanche Airbag have survived, 90 % completely unharmed.

Testing the ABS turned into an event that entertained everyone at après at Mojo’s bar in Villeneuve. I feared that I was going to be ejected backwards out through the glass door, but pulling the activation handle was much less traumatic than I expected even though standing in the middle of a bar with two giant orange angel wings did feel slightly ridiculous. There is, though, a rumour that a certain guide detonated his in the La Grave lift, by mistake, which was probably even more ridiculous - and entertaining, if only there was video evidence.

I ski toured with my ABS during last March, in a spring season heavy with snow but with warm temperatures making the backcountry more susceptible to avalanches than I have ever known.

And, no, I didn’t actually have to test it in an avalanche, although I did prime the trigger a couple of times. The test for me was the fact that it was both light and comfortable.

So does it work? Yes. It is lightish (these bags are never going to be featherweights), roomy and comfortable - and, will, we trust work if I ever have the misfortune to be caught in a slide and actually remember to pull the handle .

Does it look good?  In so far as it  makes me look like I’m an off-piste pro, then, hell, yes. My only question is why off-piste riding women are still buying handbags instead?

FACTS ABOUT THE ABS AVALANCE BAG

The ABS Avalanche Airbag is an intelligent system that helps you avoid getting completely buried in the event of an avalanche as well as preventing as much harm as possible. The form of the airbags is enhanced in a way that it can provide protection for the head, without compromising neck and head movement.

With one pull of the activation handle of the backpack, the twin airbags will inflate in mere seconds to a total volume of 170 litres. This additional volume will likely prevent the burial of the carrier. The ABS system also gives the wearer a flatter body position on top of the avalanche which lessens the impact the body has to endure due to the enormous dynamic forces within the avalanche, greatly reducing the risk of injury. Cartridge and handle can be refilled.

Remember, over the past 20 years, 98 % of all avalanche victims with an activated ABS Avalanche Airbag have survived, 90 % completely unharmed.