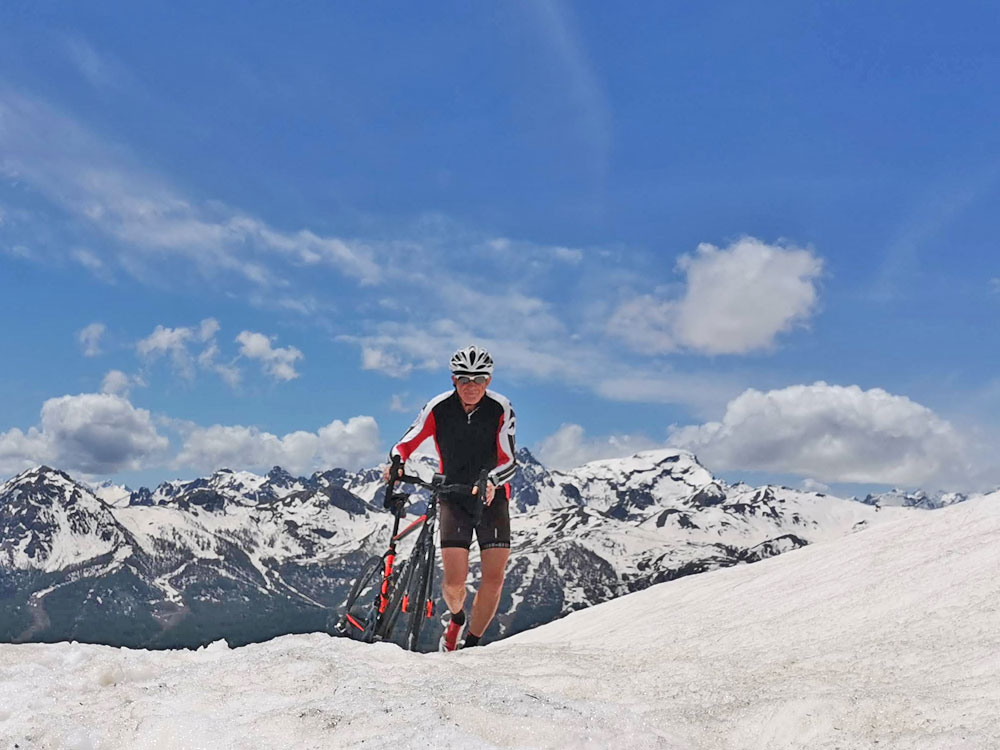 Now out of confinement and what was the affect of 8 weeks of lock-down in preparing for the forthcoming cycling season?

The cycling season for me at least would normally start in late March but confinement meant I could only cycle within a one km radius of home, so other strategies were required in order to get cycling fit...

Have to say the eight or so weeks of confinement have not been too bad on the exercise front.

For sure it's been very frustrating to not only see the most unseasonal warm weather and subsequent great cycling conditions back in the UK, but also to see many friends making the most of the more relaxed lock-down measures and regularly clocking up 100km rides!

When the closure of Serre Chevalier resort was announced we had a couple of days of Ski Touring and we thought "great we can cope with this" then that was banned, so no worries "I can cycle" and then within two more days more severe restrictions were introduced with the one-kilometre radius / one hour limit.

Rather than be glued to the turbo beasting myself with Sufferfest, though I did try a Zwift trial and I can very much see the appeal of that, along with the Mrs and the dogs I slowly started getting back into running.

I actually used to be more of a runner than a cyclist, but ten or so years ago I tried a new running method, Pose / barefoot running and subsequently pulled my calf muscles and ever since I've always had issues, the only positive is that running uphill they're not too bad!

Running here also enabled us to go out longer and further than the allotted distance & time as we simply disappeared up into the forest and trails behind us, and on the longer sorties, we carried two attestations* one on the phone with a rough time on when we left and then a paper form with another time that took into account that we might be out for much longer than an hour, however, we were never stopped by a gendarme.

As we know many of the rules of lock-down have been somewhat grey and cycling outdoors in France was one of those, whilst the French Cycling Federation said you should not cycle it was never a legal decree, and indeed the Prefect of the Hautes Alpes agreed that cycling was ok as long as the one km. one hour was adhered to.

The first time I went out on the bike a gendarme drove past me and as I was into my second 5km circuit, having cycled along the road one km then headed back and then cycled up to the village opposite us so a gendarme van pulled me over.

It was all very friendly wanting to obviously see my attestation and that I was indeed following the restrictions and at no point was it mentioned that cycling was "interdit".

Whilst fumbling for my attestation on my phone I was quite proud of grabbing this shot. They later got out of their van as the guy I think was quite interested in my bike and also looked at my computer to double-check my time and distance 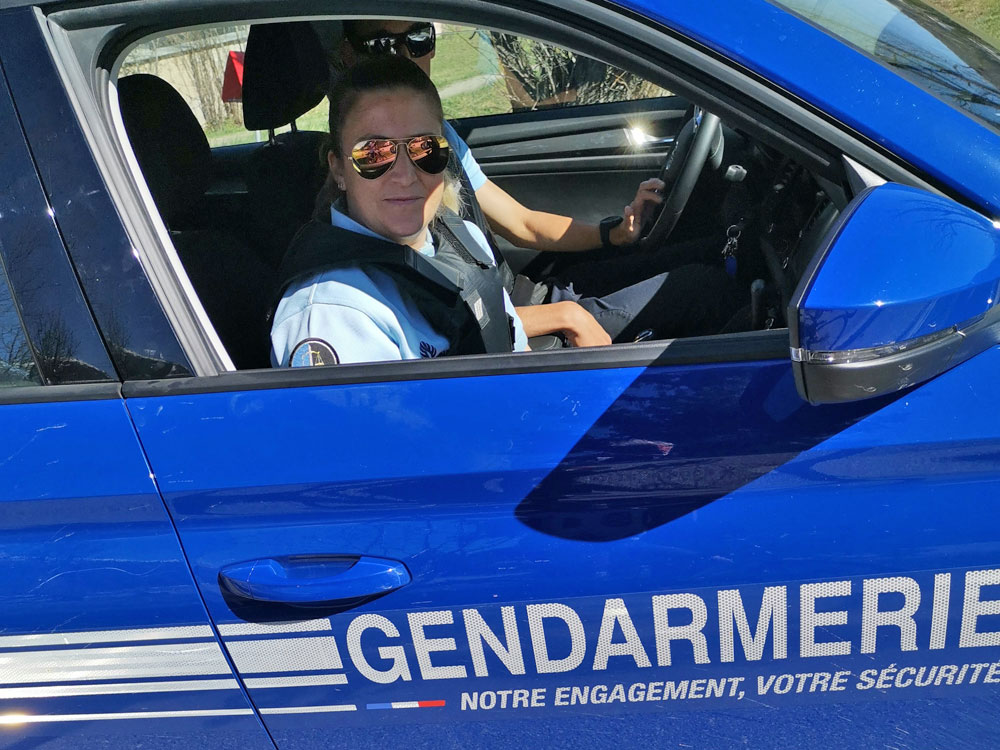 When the second tranche of four weeks of containment was announced I decided that I needed to lose some of the Winter kgs I'd amassed as an hour or so a day of exercise was not doing it, normally we'd be ski touring or cycling 3+ hrs a day.

So for four weeks with the end date being when the restrictions were scheduled to be eased, no beer, no sugar, no dairy, no snacks and a limit of two glasses of wine a night, combined that with some long runs and the weight came off, I would not say fell off as it looked like my calves had grown a little.

Combined with the diet, most days when still warm in the late afternoon / early evening  I was doing a yoga/stretching session, helped along by Beanie, and this too definitely helped the old body try to get more in shape. 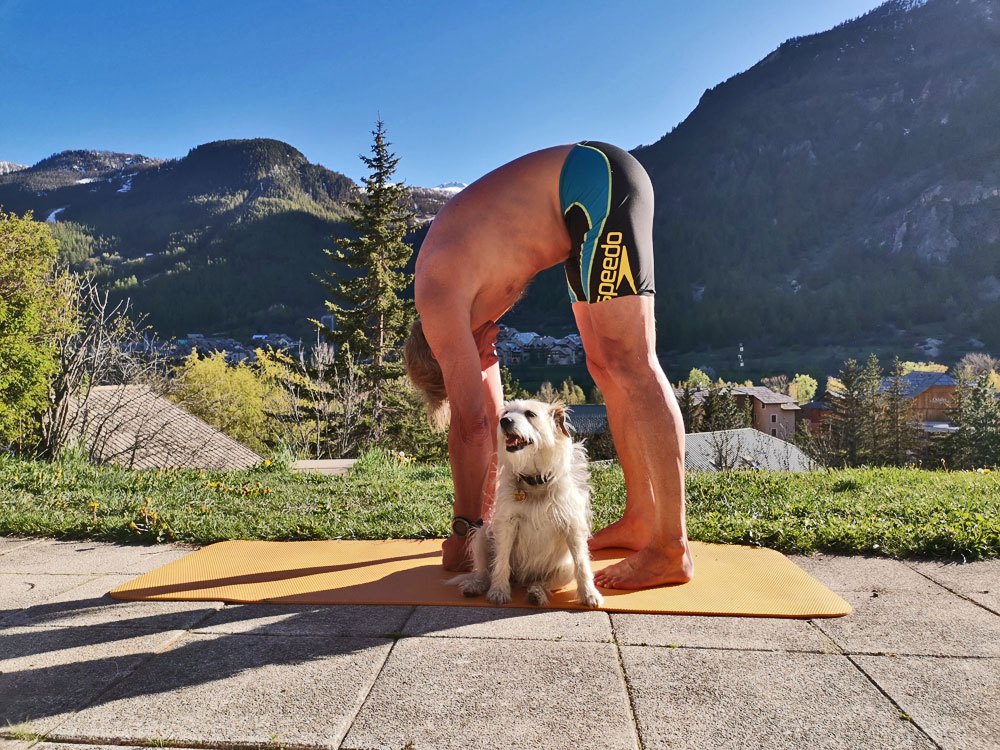 After I'd returned from a gruelling half-marathon sky running sortie along the Chemin du Roy and the Balcons de Serre Chevalier, literally above where we live, ending up being out for 3.5hrs I jumped on the scales (dehydrated) and I was down to 72kgs from 80kgs though I quickly put back on a couple of kgs in liquids. 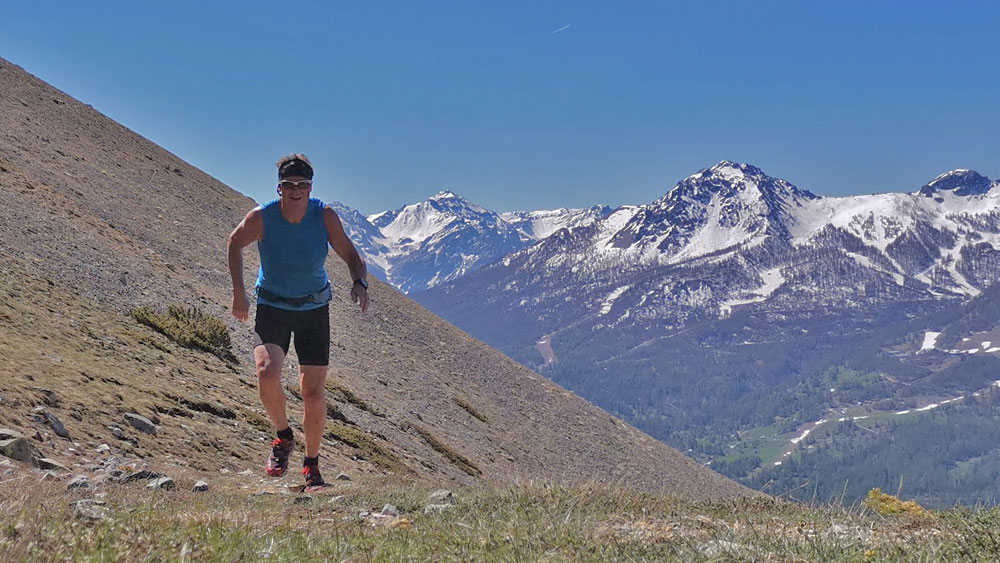 So May 11th loomed and break-out was on the horizon, the only issue was that many rain clouds were also on the horizon so the first bike ride of the season would have to wait.

When I set out the next day in the back of my mind there was the target of the 100km May Grand Fondo (the joy of Strava challenges) if the legs felt good.

I asked again just to confirm no issues with going into Italy if I rode up to Sestrierre and came back over Montgenevre and they again said no issue, but I will double check when I do it just in case that changes.

From Montgenevre I descended back down and went up Nevache and the short climb up to Col de l'Echelle where there was a barrier which I had to walk around I then carried on to the Italian Col and then saw what the issue really was! 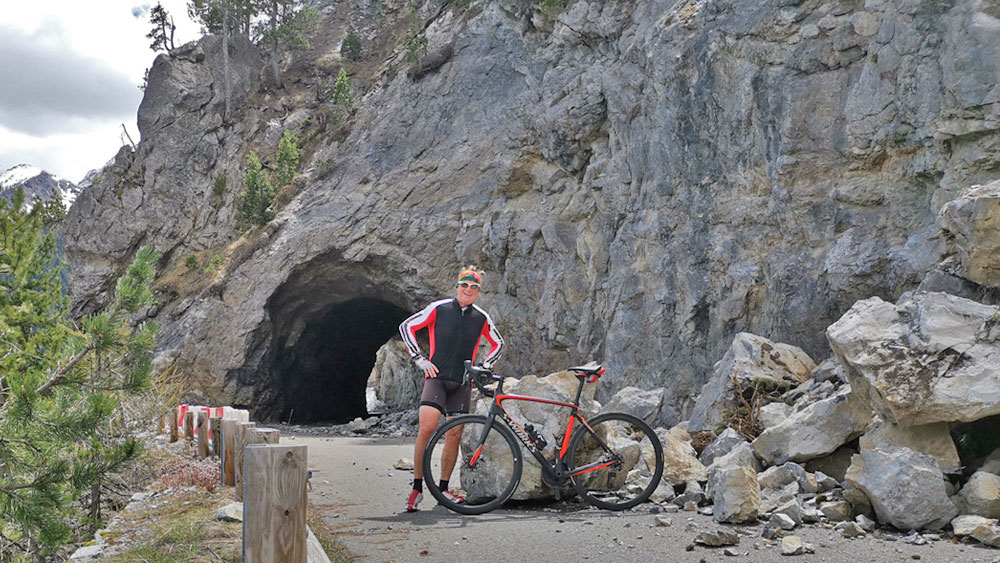 I did try cycling through the tunnel to drop down into Italy but so much debris and puncture city with the sharp rock, so turned back.

From the Echelle I dropped back down to Nevache and then the final climb all the way up to Refuge Laval, the end of the road at just over 2,000m.

The good news was that they'd just opened the road, sweeping all the debris off etc

Many a marmot up there and I've never seen it so quiet up there, all though many a local cyclist out in the lower valley.

The weight loss was really obvious feeling that I had an extra gear if I needed, just a shame about the headwind in the valley which curtailed my speed, but I still managed 24kph over 105km and over 1,800m of climbing.

A few days later with a break in the grim weather, it was the turn of the Col du Granon, probably the hardest climb in France, as I was feeling reasonably optimistic after Tuesday and my new found motor and I was hoping to go well up there.

The first segment was 5.5km at 10% and I thought I was going well but HR was pretty low and I did not feel I could push it, so held steady hoping I'd still do a good time, but was over 2mins down on PB, but still managed 4th best (out or 34 ascents up there) and HR was 149 vs 162 for the PB, so not rocket science to work out still had Tuesday's ride in my legs.

It was also evident that I'd not be doing a PB on the overall HC climb which is 11.3km at an average of 9%+ and 1,041m, and with a couple of km to go I could see my excuse for a poor time with the road abruptly closed with snow, I was sort of half expecting this and had a hoof picker to pick the snow out of my cleats after walking across the snow in various places. 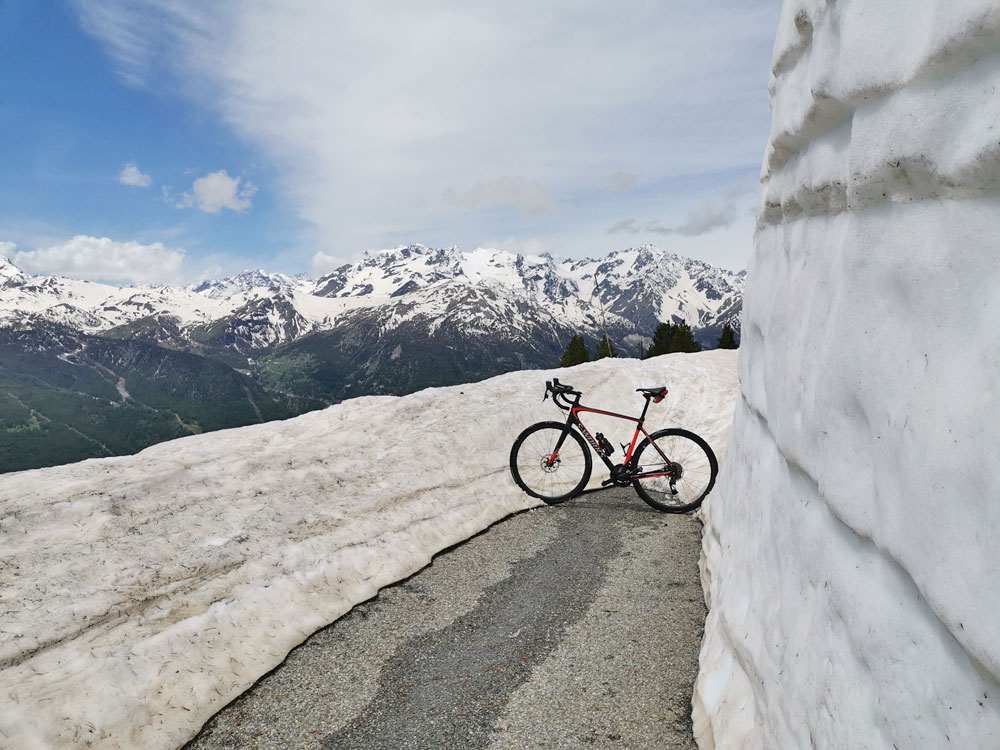 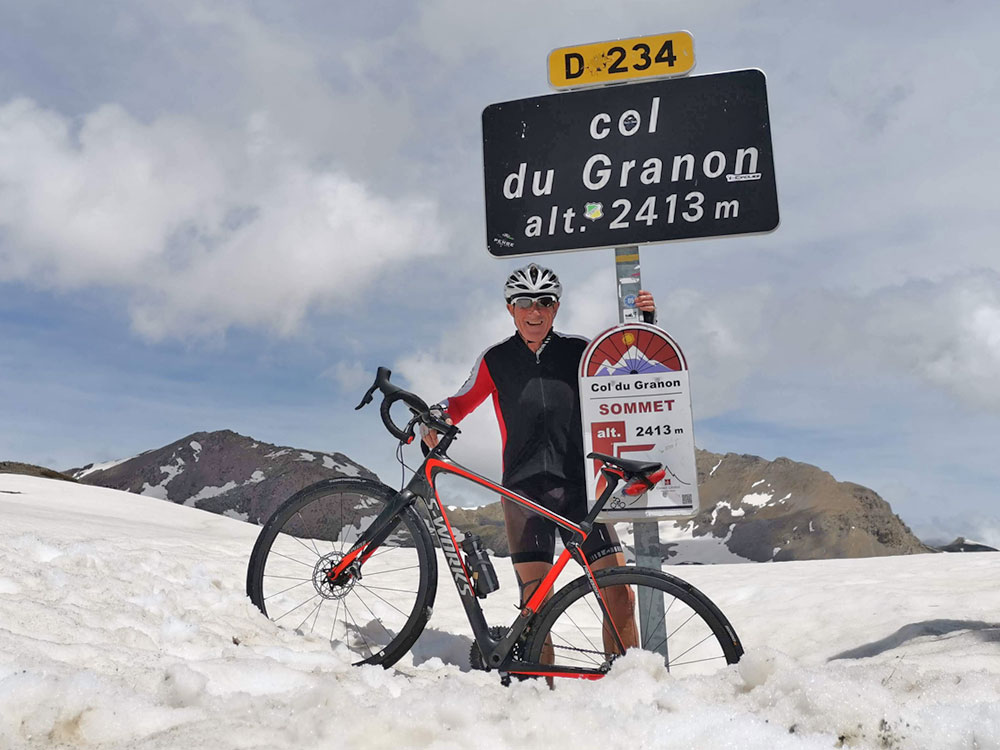 Needless to say no PB's on the descent!